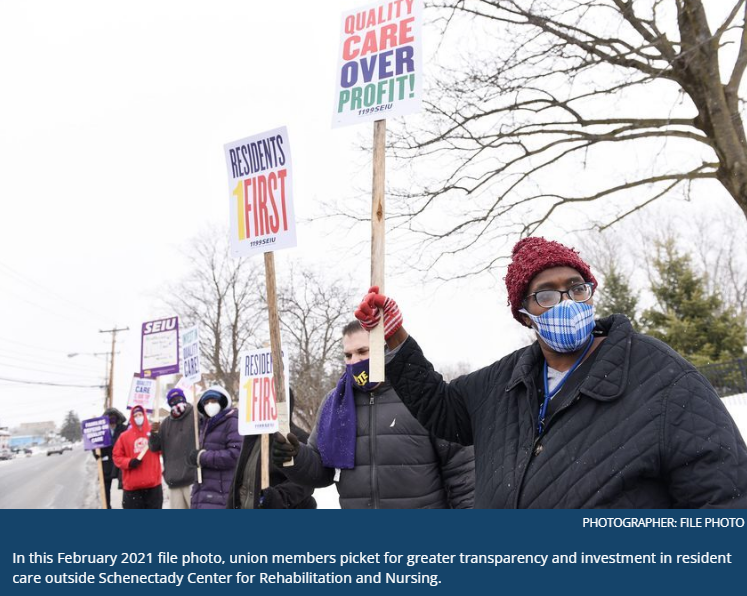 (ALBANY, NEW YORK) - The long-running complaint that some nursing homes are operating with too few employees persists, despite passage of legislation in New York State that was designed to address it.

The nursing home reform measures signed into law in 2021 require nursing homes to provide 3.5 hours of direct care per resident per day.

They also require some facilities to remit to the state any operating revenue in excess of 105% of operating expenses, as well as to dedicate at least 70% of revenue to patient care and 40% to salaries for Employees who provide that care.

The measures were set to take effect on January 1st, but Governor Kathy Hochul on December 3st1 signed an Executive Order delaying the start to January 30th because of the widespread shortage of Health Care Workers in New York.

Meanwhile, more than 230 nursing homes - as well as a few of their trade organizations, filed suit in Federal Court in Albany on December 29th seeking to block the reforms from ever taking effect, arguing they are unconstitutional on multiple grounds.

Named as the defendant is Mary T. Bassett, Acting Commissioner of the New York State Department of Health, which would codify and enforce the reforms.

One of the strongest advocates of the reform measures - 1199 Service Employees International Union (SEIU) United Healthcare Workers East, which represents Workers at many New York nursing homes - is restating the need for staffing standards and urged Hochul to take steps so they are achieved.

One of the largest parties to the Federal lawsuit - NYS Health Facilities Association, which represents hundreds of for-profit, non-profit and government nursing homes statewide, including those in the lawsuit - said nursing homes can’t afford to hire more people because the state has cut their funding year after year.

In comments to The Daily Gazette last week, both organizations advocated for essentially the same thing, but in opposite order: 1199SEIU wants the staffing requirement in place immediately and plans to advocate for more state funding, while NYSHFA said the funding has to be increased to allow more Staff to be hired.

Dennis Short, Senior Policy Analyst for 1199SEIU, said the argument that the workforce shortage makes hiring difficult is undercut by the fact that more than half of New York nursing homes were already meeting the 3.5 hours-per-resident standard in the second quarter of 2021 when the reform measures were signed into law by then-Governor Andrew Cuomo.

“What that tells us is lots and lots of employers have been able to meet that standard, even (amid) COVID,” he said. “Even before the pandemic started, if you asked Nursing Home Workers what issue (was most important), it has always been short staffing.  It prevents them from providing the care they know residents deserve.”

Nursing homes don’t have a hiring problem, he asserted, they have an employee retention problem.

To Continue Reading This Labor News Report, Go To: https://dailygazette.com/2022/01/09/struggle-over-n-y-nursing-home-staffing-reform-continues/