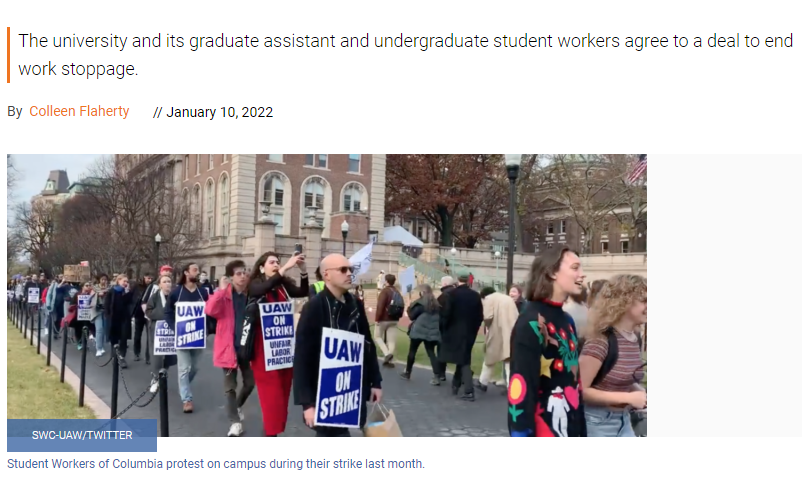 The four-year deal includes a major win for the Union, given Columbia’s reluctance to agree to it: Access to full arbitration or mediation for students’ claims of discrimination and harassment.

This extends to sexual harassment and misconduct claims, after accusers have exhausted the university’s own internal avenues for investigations and appeals.

Access to binding, independent arbitration in misconduct cases became a goal for several Graduate Student Unions around the time of the Me Too Movement, which highlighted the potential conflicts of interest in university-run misconduct investigations.

Student Workers at Harvard University achieved access to arbitration in their recent contract deal, for instance - but only for cases that do not involve alleged violations of Federal Laws against gender-based discrimination.

Columbia’s deal includes arbitration options for cases that do involve Title IX of the Education Amendments of 1972.

Relatedly, the new Columbia contract includes transitional funding for up to one semester for students who say their relationship with their academic adviser is unhealthy or characterized by discrimination, harassment or other inappropriate behavior.

If the contract is ratified, Columbia Ph.D. students will see retroactive pay increases of no less than 4% this academic year, plus an additional 2% intended to cover Union Dues.

That’s followed by 3% raises in each of the next three years.

Twelve-month-appointment minimum salaries - after dues, will be $43,100.

Summer stipends will grow to $5,500 in the first year of the contract.

According to information from the Union, students in programs such as social work are significantly underpaid relative to colleagues in other programs and to the high costs associated with living in New York City.

Master’s and Undergraduate Student Workers included in the Bargaining Unit will see retroactive pay increases of no less than 5% this year and 3% annually thereafter.

Minimum hourly pay will be $21.

On benefits, the university will pay 75% of dental insurance premiums for Ph.D. students and their dependents and offer vision coverage.

Students whose research was impacted by COVID-19 are also eligible for more funding under the contract.

To Continue Reading This Labor News Report, Go To: www.insidehighered.com/news/2022/01/10/columbia-student-workers-reach-contract-deal-end-strike