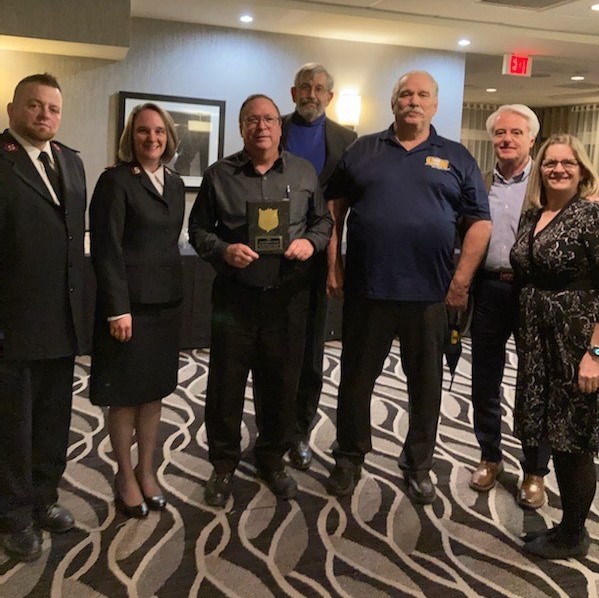 (NIAGARA FALLS, NEW YORK) – Across the Labor Movement, Labor Unions and their Members continually step up in an effort to help those in their communities who need a hand up or to ensure the children of struggling families have a good Christmas during the holiday season.

And they don’t do it for the publicity, they do it because it simply is the right thing to do.

And that dedication was recognized last week when the Salvation Army of Niagara Falls presented the Niagara-Orleans AFL-CIO Central Labor Council with its Good Neighbor Award, in part for stepping up and helping 25 area families and their children realize a Christmas that more than likely they would not have had.

“I’ve served twenty years in five states and I can tell you that (Organized) Labor’s made up of ‘real people who care about their neighbors,” Salvation Army Major Stephen Carroll told WNYLaborToday.com following an awards dinner held in Niagara Falls on Thursday (December 6th).  “They ‘support the people who live in their communities.’  ‘Their interest is bent on serving each other.’”

“I ‘did not know’ the Salvation Army ‘was giving out any awards, but we didn’t do this for any award - we did it because it was the right thing to do,’” Niagara-Orleans AFL-CIO Central Labor Council President Jim Briggs, who also serves as United Steelworkers (USW) District 4 Sub-District Director, told Your On-Line Labor Newspaper.

“It’s ‘nice’ for the Labor Council ‘to get noticed when so much of what we do goes unnoticed.’  And, ‘it’s actually nice when someone does.’  The Salvation Army ‘realizes what we do.’  ‘Its unfortunate most of the mainstream media doesn’t cover us, but if you look back, we produce so much for the Middle Class - more than any politician that I know of.’  ‘We have a small community and to give families a Christmas when they wouldn’t have one does make a difference.’  The Salvation Army ‘does a tremendous job and to be able to partner with them, especially at this time of the year - we’re glad we could do it,’” Briggs said.

WNYLaborToday.com Editor’s Note: USW Local 6992 President Angelle Gregoire said the Local’s Membership - who are employed at DuPont in Tonawanda, donated $2,585 in gift cards and $500 in food to the Adopt-A-Family drive organized by the Niagara-Orleans Labor Council.  The donations were accepted in early December outside the Western New York plant, where USW District 4 Director Del Vitale was also in attendance.  (Photo Courtesy of USW Local 6992) 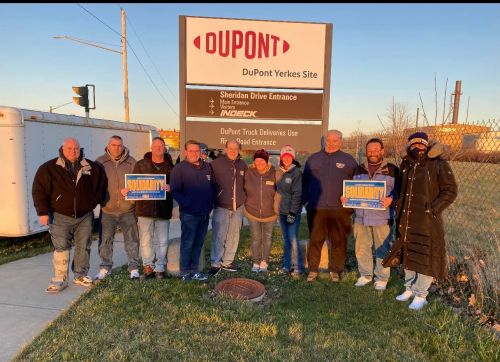 Also contributing to the Niagara-Orleans Labor Council’s fundraising drive were Alicia Coyle, the wife of IBEW Local 237 President Nick Coyle, and the Jakobi Family, who donated boxes of porcelain dolls.

“(The Salvation Army) ‘felt the Council went above and beyond helping families that are less fortunate during the Holiday Season.’  ‘It’s great to get this kind of response for the good work Labor does in the community,’” United Way of Greater Niagara/Niagara-Orleans Labor Council Labor Liaison Bill Jakobi, who served as the fundraiser’s Campaign Coordinator, told WNYLaborToday.com.

“We’d reached out to the Salvation Army, who provided use with a list of families and their ‘wish lists.’  ‘Our main goal was to help the kids,’ but we helped twenty-five families, including many single parents - as many as one-hundred people.  (Labor) ‘does this out of the kindness of its heart and what better way than to be involved in an effort to put a smile on a child’s face who might not have had a Christmas,’” Jakobi said.

On another note, retired USW Local 9436-7 Member Michael Henderson, who volunteered to be a Salvation Army bell-ringer this past Holiday Season, was singled out by the Salvation Army in Niagara Falls for raising nearly $13,000.

“He’s been one of ‘top’ bell-ringers ‘for the past few years,’” Salvation Army Niagara Falls Major Carroll said of Henderson (pictured below/photo from Henderson’s Facebook Page). 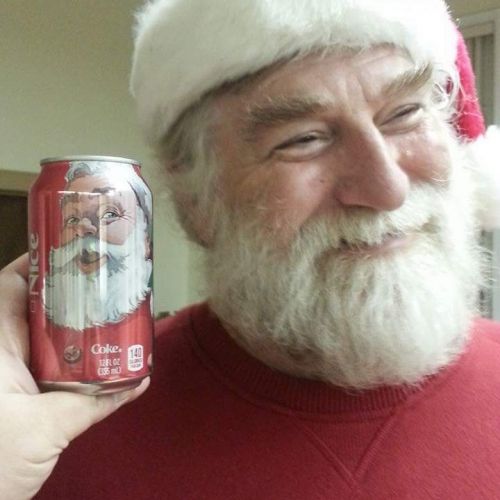 “He ‘volunteers and sets a (yearly) goal.’  He raised ($12,891) this year.  ‘Everyone assumes he’s Santa’ (Henderson draws a resemblance with his long white beard).  ‘He always gives his time when he can,’” Carroll said.