U.S. Secretary Of Labor Marty Walsh On The December 2021 Jobs Report: âStrong & Steadyâ - The American Economy Adds 199,000 Jobs In The Month Of December, While The Unemployment Rate Dips To 3.9%, Down From 4.2% In November 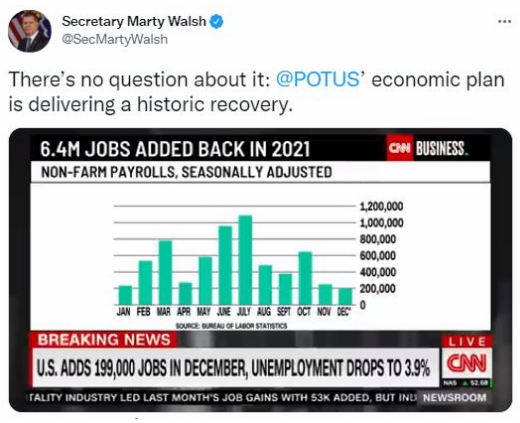 (WASHINGTON, D.C.) - The Bureau of Labor Statistics (BLS) reports the American economy added 199,000 jobs in the month of December and the unemployment rate was 3.9%, down from 4.2% in November - marking the first time unemployment has been under 4% since the COVID-19 Pandemic began and the largest one-year drop in the unemployment rate on record.

“With strong, steady job growth every month of the Biden-Harris Administration, we added (6.4 million) jobs in 2021, reaching eighty-four-percent of the jobs lost at the start of the pandemic recovered, and empowered workers to secure higher wages, especially for low-wage Workers,” said U.S. Department of Labor Secretary Marty Walsh, who continued:

“At the Department of Labor, we are focused on building an inclusive recovery that lifts up all Workers and communities and that means identifying and addressing persistent inequities as reflected in by the increase in Black unemployment in December.  We are investing in equity and diversity in job training programs and career services, strengthening workplace health and safety and wage and anti-discrimination protections for the most vulnerable Workers, and making sure the President’s Bipartisan Infrastructure Law creates good jobs for every community.  We are devoted to empowering all Workers - morning, noon and night.  This work is especially important as the Omicron variant of COVID-19 impacts communities across the country this month, including many Workers and workplaces.  We have the tools to keep people safe, including mask guidance, increased testing capacity and vaccines that work to prevent severe illness.  I urge anyone who is eligible and has not received a vaccine or a booster yet to visit vaccines.gov and find a vaccination site near you.  And I urge all employers to provide the flexibility and support necessary to help Workers get vaccinated, protect their health and continue our historic, Worker-centered recovery.

While the unemployment rate fell to 3.9% in December, at the same time, CNN reported, the labor force participation rate was unchanged from November at 61.9%, but still 1.5 percentage points lower than in February 2020.

The unemployment rate for White, Asian and Hispanic workers dropped in December, while joblessness increased for Black Workers.

At year-end, the Nation was still down 3.6 million jobs compared to before the pandemic in February 2020.

Even so, 2021 will go down in history as a year of record-breaking jobs growth: America added 6.4 million jobs last year, the most since records started in 1939.

"We made sizable inroads to overcoming the jobs deficit if you look at the overall state of the labor market, it's impressive," said House, the Wells Fargo economist.

In a sense, even the labor shortage that is hamstringing businesses is a relatively good problem to have, she said: "That's the opposite of what we saw two years out of the Great Recession."

To be sure, 2020 was also a year of ground-breaking job gains, but accounting for the steep losses at the start of the pandemic, the economy still recorded a net loss of jobs that year.

The U.S. economy added 199,000 jobs in December, the U.S. Labor Department reported, which was the fewest jobs added in any month of 2021.

That was a major disappointment: Economists had forecast jobs growth of double that number.

So, how could forecasts be so off again?

"We just have to acknowledge that this is still such an unusual time.  In the best of times it's hard to tell," said Sarah House, an Economist at Wells Fargo.

To Directly Access This Labor News Story, Go To: www.cnn.com/2022/01/07/economy/december-jobs-report/index.html