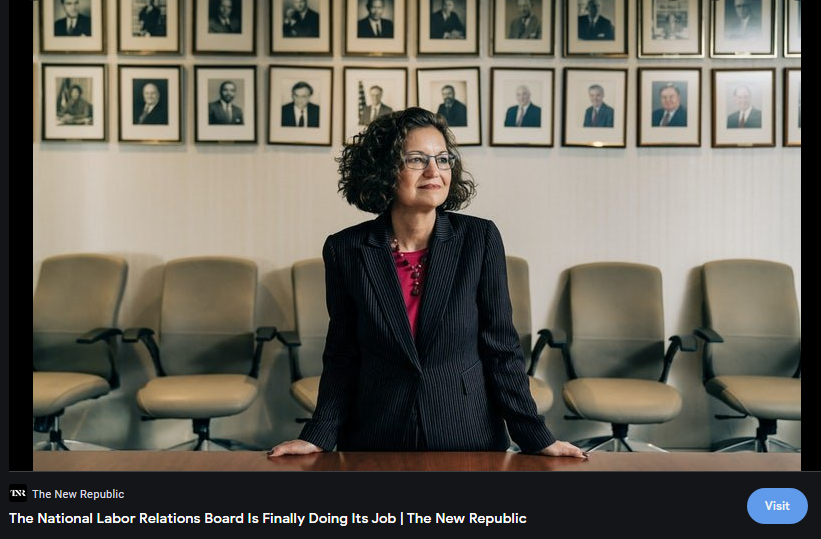 (WASHINGTON, D.C.) - On January 20th, 2021, after President Joe Biden was sworn in on the West Front of the Capitol, and about the time Amanda Gorman finished reciting her inaugural poem, Peter Robb received an e-mail from the new President telling him to clear out his desk by 5 p.m.

Robb was General Counsel of the National Labor Relations Board (NLRB) and while incoming Presidents frequently dismiss their predecessors’ appointees, they don’t typically muck around with independent agencies like the NLRB.

Robb, a Trump appointee, still had about 10 months left in his term, but a statutory quirk allowed Biden to fire Robb, even though no one could remember such a thing happening before.

Presidents seldom come into office knowing what it is an NLRB General Counsel does, much less who holds the job.

Biden, the most Pro-Labor President since Harry Truman, understood that whoever was NLRB General Counsel would exercise tremendous power - more power, arguably, than anybody else in government - to carry out his Administration’s Labor policies.

Less than one month after Biden pushed Robb out, he nominated Jennifer Abruzzo to replace him.

She arrived at the agency in July after a party-line Senate confirmation.

The NLRB is a quasi-judicial panel that hears cases, makes rulings and sets binding precedents about what does and doesn’t constitute a violation of Labor Law (committed usually, of course, by management).

The NLRB’s General Counsel is effectively the agency’s prosecutor.

The General Counsel also supervises the agency’s 26 Regional Offices, where claims of Unfair Labor Practices (ULPs) are investigated and, in most instances, resolved.

That gives Abruzzo enormous influence over what the Federal Government’s rules will be about how managers in the Private Sector may or may not treat their Workers.*

Robb settled, for a pitiful $172,000, an ambitious case brought by his Democratic predecessor that documented widespread labor violations at McDonald’s franchises in which the corporation was plainly complicit.

During Robb’s first two years, the NLRB Staff shrank by 13%.

This all reflected the Trump Administration’s wider anti-Union agenda.

Biden and Abruzzo are trying to reverse as much of this as they can.

To Continue Reading This Labor News Story, Go To: https://newrepublic.com/article/164800/jennifer-abruzzo-nlrb-enforce-biden-union-agenda?utm_medium=Social&utm_campaign=EB_TNR&utm_source=Twitter#Echobox=1641570029