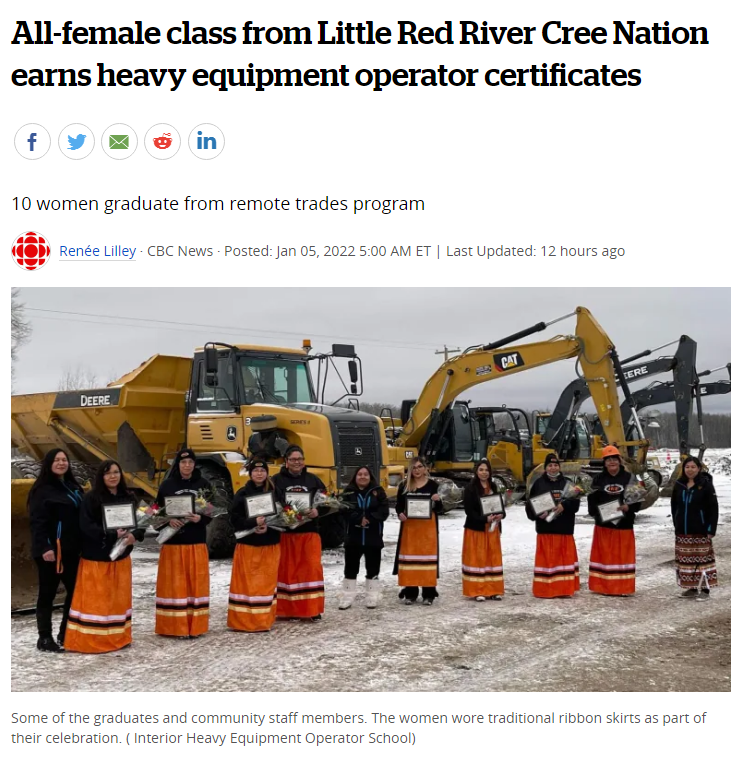 Lakeisha Metsikassus, 22, has already secured a job as a Heavy Equipment Operator with the Public Works Department in her home community of Fox Lake.

"I (hope) to inspire other Women to do whatever they want to do," she said.

The program was hosted in Garden River.

Metsikassus was the only person from Fox Lake to apply to the 13-week program.

The 10 students graduated in early November and she applied for the job at the Public Works Department three days later.

Metsikassus said she liked learning the dozer while in training and is already using a grader and rubber tire backhoe on the job.

"Every time I ask the experienced operators questions, they just tell me what to do," she said. "They don't laugh at me when I ask."

Metsikassus has a one-year-old son who she said was her main motivation to apply for the training program: "He's my inspiration, he's everything I do (this) for.  I want to set an example for him."

IHE Interior Heavy Operator Equipment School based in Alberta and British Columbia delivered the program, which has a remote mobile division where Instructors can deliver courses in communities they partner with.

Remote Instructor Russ Prosser said the class was one of the best classes he's worked with in his over 20 years of training and will be used as a model for remote classes going forward: "I’ve never seen a group of students, not just Women, but students, pick it up the way these girls picked it up.  It's as if they've done it before, that's how good they were."

Christine Hansen, Director of Operations and Business Development with the IHE School, said no one from the company knew the class would end up being all women: "What was interesting was, when we talked about certain criteria that would increase the chance of the participants success, at no point did race or sex come up, and rightly so.  We just assumed it would be a mix of both sexes as most of our programs are."

Within her decade of working for the company, Hansen said the enrolment of women in the courses has increased from roughly 6% to 8% to now with over 10% - and climbing.

She said the remote mobile program is fairly new, beginning within the last two years out of a need from Indigenous and industry partners to have training more accessible.

To Directly Access This Apprenticeship And Training News Story, Go To: www.cbc.ca/news/indigenous/indigenous-trades-heavy-equipment-little-red-river-cree-nation-1.6303009?fbclid=IwAR1DaOEa3Xrqm5H3AL7EPPCTL7THIZy5l64oicA8FMHyc-Nh_NoNw3d1DRg