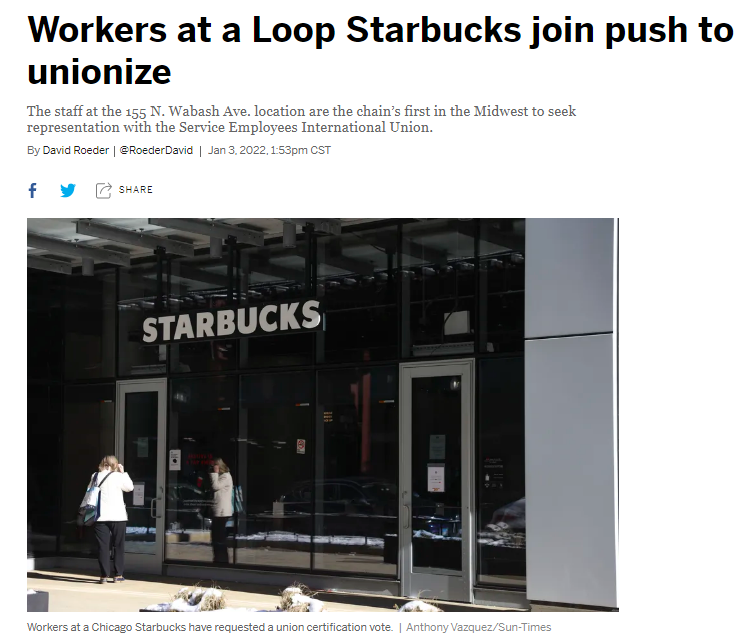 (CHICAGO, ILLINOIS) - Workers at a Downtown Chicago Starbucks have become the first in the Midwest to request a Union Certification Vote at the coffee chain, which is facing organizing drives at other outlets around the country.

Employees at the 155 North Wabash Avenue store have submitted signed cards and seek to join an affiliate of the Service Employees International Union (SEIU).

The cards were turned in to the National Labor Relations Board (NLRB), a Federal Agency that oversees Union Organizing Drives.

An overwhelming majority of the store’s roughly 14 Workers, most of them part time, signed cards asking for an election, Organizers said.

Pete DeMay, Organizing Director with SEIU affiliate Workers United, said he hopes the NLRB will hold a hearing on the request later this month and schedule an election for a few weeks later.

Workers at the Wabash store said they want a voice in their wages and working conditions, with safety being a principal concern.

They said that with crime more common in the Loop, they’ve had numerous instances of customers getting abusive or threatening.

Some confrontations involve the requirement customers wear face masks when not eating or drinking, they said.

“We don’t feel our safety issues are being listened to by the company,” said Brick Zurek, a Shift Supervisor and a Starbucks Employee for two and a half years.

Zurek said Starbucks needs to post a security guard at the store during certain hours.

Sonni Miller, a Barista, said a visiting executive overruled Employees who, acting on their own, banned an abusive customer from the store.

Miller also said the Workers want improvements in wages that generally start about $15 or $16 per hour.

Starbucks is known for Employee benefits considered progressive for the retail or restaurant businesses, such as tuition reimbursement and paid parental leave, but the Workers said some benefits can be improved and could start immediately rather than after Workers reach a minimum level of service time.

“It’s a company that does some things right,” DeMay said. “The mission is noble.  There are enough things done right that it keeps people there.”

But he said that means Workers need improved wages and benefits to justify building a career at Starbucks.

A spokesperson had no immediate response to the concerns about safety at the Wabash store.

Starbucks Workers at a Buffalo, New York, outlet in December recently became the chain’s first location with a Unionized Workforce after the NLRB certified their election results.

Workers United also is involved in organizing drives at Starbucks elsewhere in New York State and in the States of Massachusetts, Arizona and Tennessee.