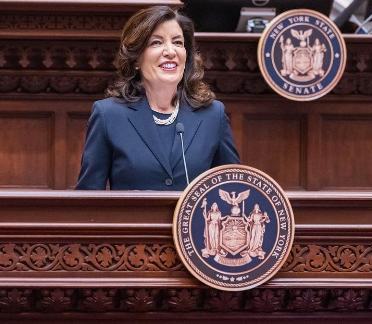 On another front, more than two million homeowners across the state would also get $1 billion in property tax rebates this year, with low-income households and seniors reaping the biggest benefits.

Hochul’s proposed spending on climate-friendly, “Green” initiatives would include $1 billion to encourage the purchase and use of electric vehicles.

On the critical issues of crime and public safety, Hochul said she plans to triple spending for the State Police to trace the purchase of guns used in crimes and fund additional training for Police Officers on the 2019 Red Flag Law, which permits the seizure of firearms from people deemed dangerous to themselves or others.

On another front, Hochul said wants to create a Jails to Jobs Program for criminals awaiting release from lockups.

Hochul would also make part-time students eligible for tuition assistance, which would be a boon to those who hold down jobs or have families and has been debated by lawmakers for years.

SUNY schools in Buffalo and Stony Brook would also be made “flagship” research institutions to spur new patents and economic development, the Governor said.

The Communications Workers of America (CWA) - whose District One represents 65,000 Members in New York State, the New York State Nurses Association (NYSNA) - which represents more than 42,000 Members and is New York’s largest Union for Registered Nurses, and the Public Employees Federation (PEF) - which represents 50,000 Professional, Scientific and Technical Employees across the state, including more than 8,000 Nurses, issued the following statement in response to Governor Hochul’s State of the State address:

We applaud Governor Hochul for recognizing our Front Line Health Care Workers are in desperate need of additional resources as COVID-19 overwhelms our hospitals.  The Governor’s pledge to invest $10 billion in higher wages, better hospital conditions, and a more robust pipeline of Workers is a huge step forward and essential for protecting the health and safety of the public.  This proposed massive infusion of resources could not have come at a more critical moment.   Skyrocketing cases have pushed our health care system to the brink of collapse. Morale is at rock bottom, thousands of Health Care Workers are quitting their jobs in despair, staffing levels are dangerously low, and hospital conditions are deplorable.  A major infusion of health care resources cannot wait - it must happen as soon as possible.  At the same time, the CDC’s (Centers for Disease Control) reckless decision to cut the isolation period for infected Health Care Workers to five days without requiring a negative test before returning to work has put both Workers and patients at serious risk.  We look forward to working with the Governor to ensure all our Health Care Heroes are appropriately protected and that all New Yorkers have the highest quality of care possible.

1199 Service Employees International Union (SEIU) United Healthcare Workers East President George Gresham - whose International Union represents more than 450,000 Nurses and Caregivers throughout the states of Massachusetts, New York, New Jersey, Maryland and Florida and in Washington, D.C. and whose mission is to achieve quality care and good jobs for all, released the following statement:

As we head into the third year of a pandemic that has lasted longer than expected, Governor Hochul’s 2022 State of the State honors the work and sacrifices that 1199 SEIU Members have endured.  We are pleased to see the Governor is making a significant commitment to invest in the current Health Care Workforce, increasing the number of new Workers joining the workforce, and moving them along their career pathway.  We are also glad to see industry-wide solutions, including a new portal for potential Health Care Workers and others seeking training.  While we await more details in the budget proposal, we do have key questions about support for vital safety net institutions that have provided lifesaving care during this pandemic and about how the need for permanent wage increases will be addressed.

Governor Hochul has brought a breath of fresh air to Albany.  Her agenda sets ambitious goals for addressing the issues our state faces.  The promise to fully fund Foundation Aid is a momentous first step toward supporting our public schools as the center of every community.  Pledges to boost mental health supports and staffing levels mark a clear commitment to meeting the social-emotional needs of students.  The Governor also is heeding the pre-pandemic calls of Educators to address staffing shortages in schools statewide and to diversify the Education Workforce by finding innovative ways to get more New Yorkers to take a look at teaching as a career.  We will continue working with her administration to bring to life our Future Forward agenda for public schools this year.  It is positive to see Governor Hochul prioritize higher education and health care and propose ways to address the financial barriers that stand in the way of more New Yorkers obtaining a post-secondary education.  We look forward to digging further into the details of her agenda for SUNY and CUNY.  We await the Governor’s budget proposal later this month and we’ll continue advocating throughout the legislative session on behalf of our Members in education, human services and health care who day in and day out selflessly dedicate themselves to the New Yorkers they serve.

At last, we have a Governor who recognizes the value of Public Higher Education to our students, our patients and the citizens of New York State.  In her State of the State Address, Governor Kathy Hochul laid the groundwork to reverse what has been more than a decade of disinvestment in SUNY.  We welcome the Governor’s agenda and are eager to work with her to break the pattern of 11 years of underfunding for SUNY.  From recruiting and retaining diverse full-time Faculty and Staff to making SUNY a ‘Nation-leading Public Higher Education System,’ to setting up child care centers on SUNY campuses, the Governor has truly made public higher education in New York state a priority for the first time in decades.  We also support Governor Hochul’s commitment to health care - including SUNY’s Public Teaching Hospitals - with a promise to set aside $10 billion to support the delivery of high-quality health care to all New Yorkers.  A portion of those funds will be used for $3,000 bonuses for weary Health Care Professionals on the front lines of the pandemic - payments that UUP has called for since the start of the pandemic.  UUP also applauds the Governor’s plan to expand SUNY’s Pre-Med Opportunity Program, a pilot program to help students who lack the means, but possess the ability to get into and succeed in their education and training at SUNY’s excellent medical schools.  It is modeled after UUP’s Medical Educational Opportunity Program, which UUP has advocated for since 2018.  The importance of SUNY’s Public Teaching Hospitals has become fully realized during the pandemic.  Tens of thousands of people have relied on our hospitals for care - as they continue to graduate thousands of doctors and medical professionals each year.  It is not enough for the state to simply maintain these facilities.  It is time to expand and improve medical services at our hospitals.  SUNY is one of New York’s most vibrant and important economic engines, providing paths to success for tens of thousands of students each year.  We support Governor Hochul’s vision and we urge her and the Legislature to follow through by providing this necessary funding in the 2022-2023 State Budget.

To Access Governor Hochul 2022 State of the State Address, Go To: www.governor.ny.gov/news/governor-hochul-delivers-2022-state-state

And For More On This Labor News Story, Go To: https://nypost.com/2022/01/05/hochul-delivers-first-ny-state-of-the-state-address/