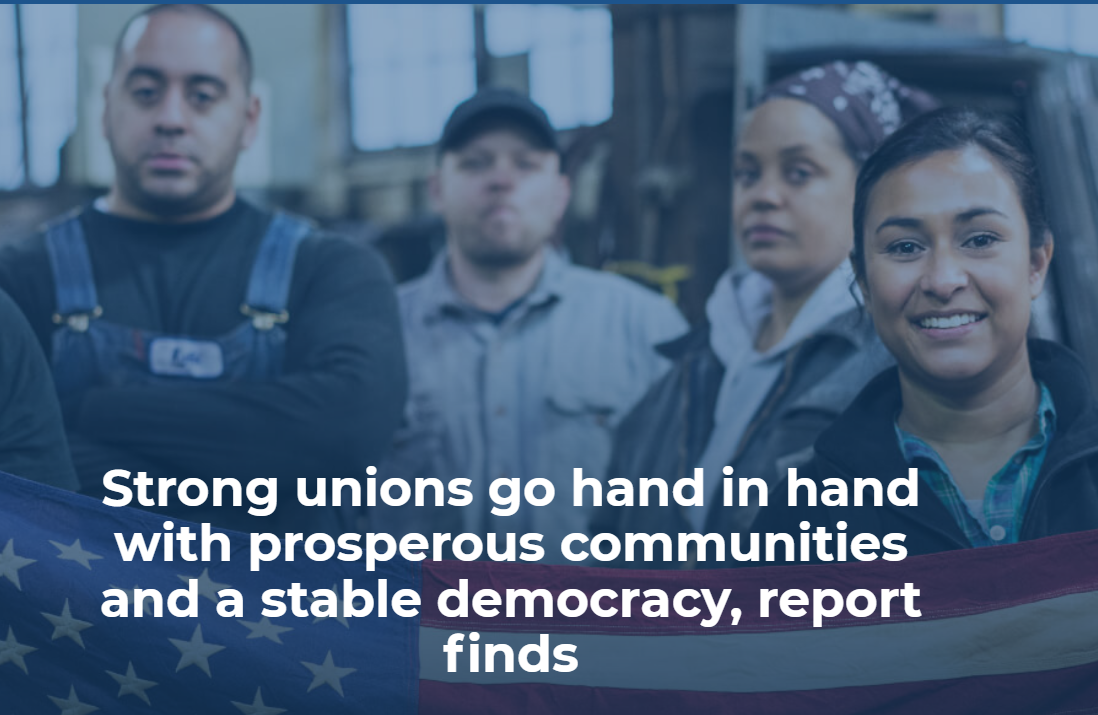 (WASHINGTON, D.C.) - Simply put, life is better in a union: Union Members make more money, have more reliable health care coverage and retire with financial security, but being in a Union also means having the resources and training to do our jobs well.

Now, a new report by the Economic Policy Institute (EPI) reinforces what Union Members know from experience - it shows that high levels of Unionization correlate with measures of economic, personal and Democratic well-being.

In other words, just as Unions directly impact Workers’ wages and working conditions, they also give Workers the power to reshape their communities, leading to more equitable economic and social structures and Democracies.

“Unions promote economic equality and build ‘Worker Power,’ helping Workers to win increases in pay, better benefits and safer working conditions.  But the benefits of Unions extend far beyond the workplace,” says Asha Banerjee, an Economic Analyst at the EPI and Co-Author of the report. “The data suggest Unions also give Workers a voice in shaping their communities and political representation.”

For example, on average, the 17 most Unionized U.S. States have median annual incomes $6,000 higher than the national average, are more likely to have Paid Sick Leave Laws and Paid Family and Medical Leave Laws and have significantly fewer restrictive voting laws.

At a time when Democracy appears to be in decline in the United States, it seems especially pertinent to highlight the correlation between Labor Unions and Democratic well-being.

As the report states, most low Union Density States passed at least one Voter Suppression Law between 2011 and 2019 in contrast to their higher Union Density counterparts.

“Through long-standing advocacy and work to protect the right to vote, Unions have linked voting rights to Workers’ Rights,” says Margaret Poydock, a Policy Analyst and Government Affairs Specialist at the EPI and Co-Author of the report.

“Unions play a key role in mobilizing Workers to vote, helping to determine which political leaders are elected and what occupational backgrounds they come from,” Poydock said.

For all these reasons, Organized Labor and its Members believe it is high time Congress make it easier, not harder, for Workers to form strong Unions.

The Senate must follow the House’s lead and approve the Protecting the Right to Organize (PRO) Act, which would strengthen Federal Labor Law so Private Sector Workers have more protections and a greater ability to organize, form strong Unions and collectively bargain with their employers.

Congress must also approve the Public Service Freedom to Negotiate Act, which was introduced in the House of Representatives in October.

The proposal would set a minimum nationwide standard of Collective Bargaining Rights that states must provide Public Service Workers, thus empowering them to join together for a voice on the job.

To Directly Access This Labor News Report, Go To: www.afscme.org/blog/strong-unions-go-hand-in-hand-with-prosperous-communities-and-a-stable-democracy-report-finds