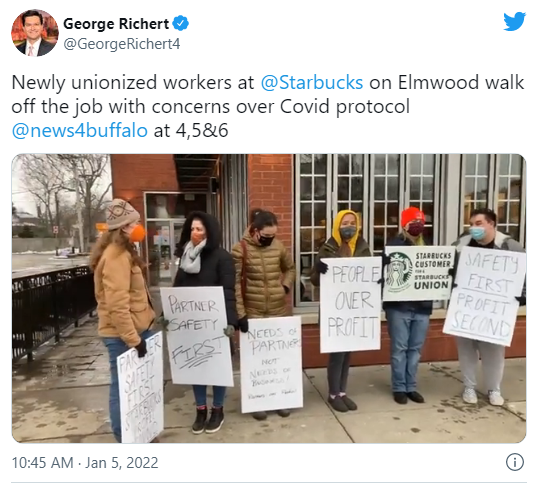 (BUFFALO, NEW YORK) – Starbucks Workers in Buffalo - who are employed at the company’s first Unionized store in the United States, walked off their jobs on Wednesday (January 5th) to protest what they described as unsafe working conditions in the wake of surging COVID-19 cases.

Starbucks Partners employed at the company’s Elmwood Avenue store in the City of Buffalo held an informational picket, telling local media that they “do not feel safe in our store.”

The Workers released a statement that was distributed by the Western New York AFL-CIO Area Labor Federation, which appears below: 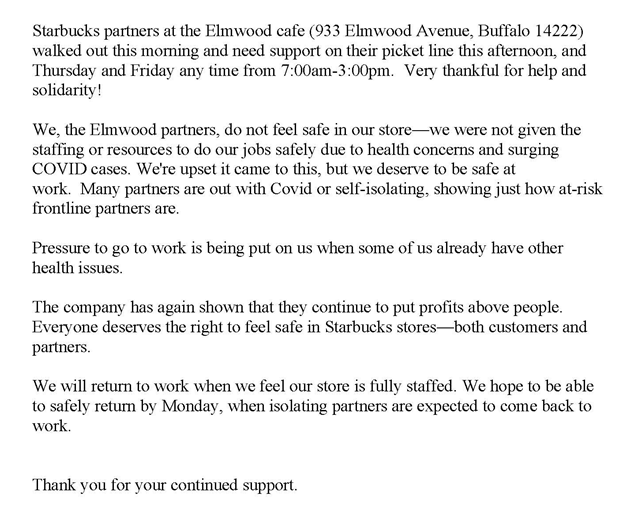 It was just last month that the Elmwood Village Coffee Shop became the first of nearly 9,000 company-owned stores in the United States to Unionize.

A number of other local Starbucks stores in the Buffalo area have also taken steps to Unionize, including Sheridan and Bailey in Amherst, Walden and Anderson in Cheektowaga, and Transit and French in Depew.

Outside New York State, Starbucks Workers in several major markets across the country – including Boston, Chicago and Arizona, have followed their fellow Partners’ lead in Buffalo and begun Unionization Campaigns.

For More On This Labor News Report, Go To: www.wivb.com/news/local-news/buffalo/workers-at-nations-first-unionized-starbucks-in-buffalo-walk-off-the-job-due-to-unsafe-working-conditions/?utm_medium=referral&utm_source=facebook.com&utm_campaign=socialflow&fbclid=IwAR1PhxWDc4fkKsoR87KMC5LuB2o2vM6UQLeoA0_9uNP-lqhuuH3578-GF5E