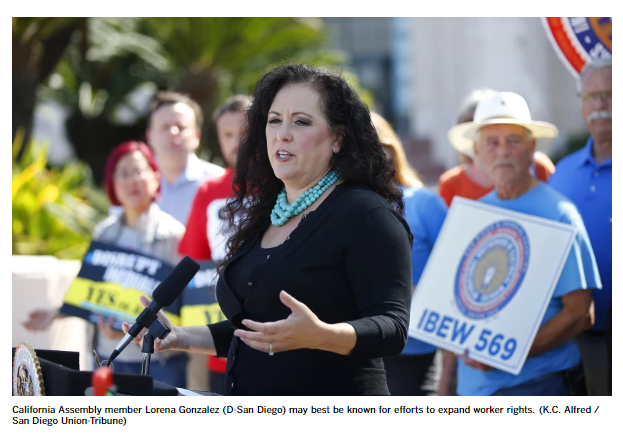 (SACRAMENTO, CALIFORNIA) - California Assemblywoman Lorena Gonzalez (Democrat-San Diego) has announced her resignation from the State Legislature and said she plans to take over as leader of the California Labor Federation when its long-time Executive-Secretary Art Pulaski steps down this Summer.

The California Labor Federation consists of some 1,200 Unions that combine to represent 2.1 million Union Workers across Private and Public Sector Industries.

The Federation’s Executive-Secretary leads the organization and works with a nearly 50-member Executive Council comprised of the heads of Labor Councils and Unions across the state.

Gonzalez, 50, made the announcement during the opening floor session of the year, marking a major shift at the Capitol as one of Organized Labor’s most formidable allies inside the Legislature steps away to lead the movement statewide.

“An opportunity to serve in this capacity doesn’t come up but every few decades, and as I think you all know, serving Working Californians is my singular priority,” Gonzalez said. “I’m very excited about this opportunity.”

Pulaski, who has held the top role at the Labor Federation since 1996, focused much of his work on organizing Union Workers and activating political campaigns as a critical force for Democratic candidates.

Gonzalez will work in an undefined role as the heir apparent to succeed Pulaski until he retires in July, at which time a formal vote to elect her will take place.

“I couldn’t think of a more qualified, passionate and committed leader to continue the critical advocacy of Working People at the Nation’s largest State Federation of Unions,” Pulaski said. “Assembly member Gonzalez lives and breathes Union values every day. “

Gonzalez may best be known for efforts to expand Worker Rights, most notably her 2019 law to revamp California’s independent contractor rules.

That legislation, Assembly Bill 5, led many Workers to be reclassified as Employees - a fight that sparked widespread criticism of the San Diego Democrat on Social Media.

The Nation’s most prominent ride-share companies subsequently qualified Proposition 22 for the 2020 ballot to allow their Drivers to be exempted from provisions of AB 5 - the ballot measure was approved by voters but later blocked in court.

To Read This Labor News Story In Its Entirety, Go To: www.latimes.com/california/story/2022-01-03/california-powerful-labor-organization-picks-assemblywoman-lorena-gonzalez-new-leader