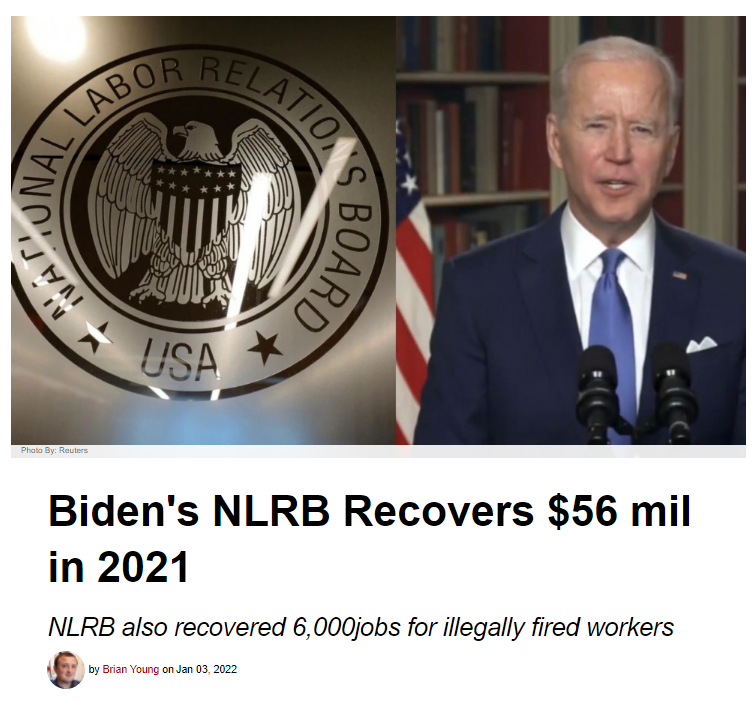 (WASHINGTON, D.C.) - 2021 was a big year for Workers and while a lot of attention was focused on high-profile strikes, record-low unemployment, and “The Great Resignation,” workers also got help from a new pro-Labor National Labor Relations Board (NLRB).

The NLRB also got 6,307 people their jobs back after they were fired for illegal reasons.

The Board says these results represent a dramatic increase from Fiscal Year 2020, in which $39,389,405 total was recovered in back pay, fees, dues and fines and 978 Workers were offered reinstatement.

“Working People have experienced tumult and uncertainty during the pandemic and have productively worked together to improve their employment conditions - including seeking appropriate compensation, schedules and workplace protections while performing essential services.  Our dedicated Staff at the NLRB helped to protect, enforce and remedy violations affecting thousands of Workers who were retaliated against for engaging in this sort of activity,” NLRB General Counsel Jennifer Abruzzo said.

“Workers should know they have the right to act collectively to improve their workplace conditions and the NLRB will forcefully defend their right to do so by seeking full make-whole remedies for them,” Abruzzo said.

A new study from the Economic Policy Institute (EPI) found that from 2017 to 2020, $3.24 billion in stolen wages have been recovered by the U.S. Department of Labor (USDOL), state agencies and class action litigation.

While this number might look large, it is just a small fraction of the wages stolen in a given year.

According to a report from the National Employment Law Project (NELP), they estimate that in 2019 alone, $9.27 billion was stolen just from Workers who earned less than $13 an hour and who were subject to forced arbitration agreements.

About 26% of the American Workforce works under a forced arbitration agreement that prohibits Employees from suing their employer or pursuing a class-action lawsuit.

Instead, Workers are forced to pursue claims and disputes through arbitration - a secretive process that heavily favors employers.

Many of these Workers never bother to file a claim over stolen wages since they believe the system is set up to protect the employer, not the Worker.

While wage theft occurs in other workplaces and in higher-wage jobs as well, it is found to be the most pronounced among low-wage Workers.

Of course, these are also the people who need every cent they get from work and usually don’t have the resources to fight their employer over stolen wages.

To Continue Reading This Labor News Report, Go To: https://ucommblog.com/section/law/bidens-nlrb-recovers-56-mil-2021