âTheyâve Shown What Is Possible When Workers Stand Together And Refuse To Be Dividedâ - 17,000 Non-Union Workers In California âGo Unionâ With The United Auto Workers & News On Other Unionization Wins In Alaska, Colorado & Michigan 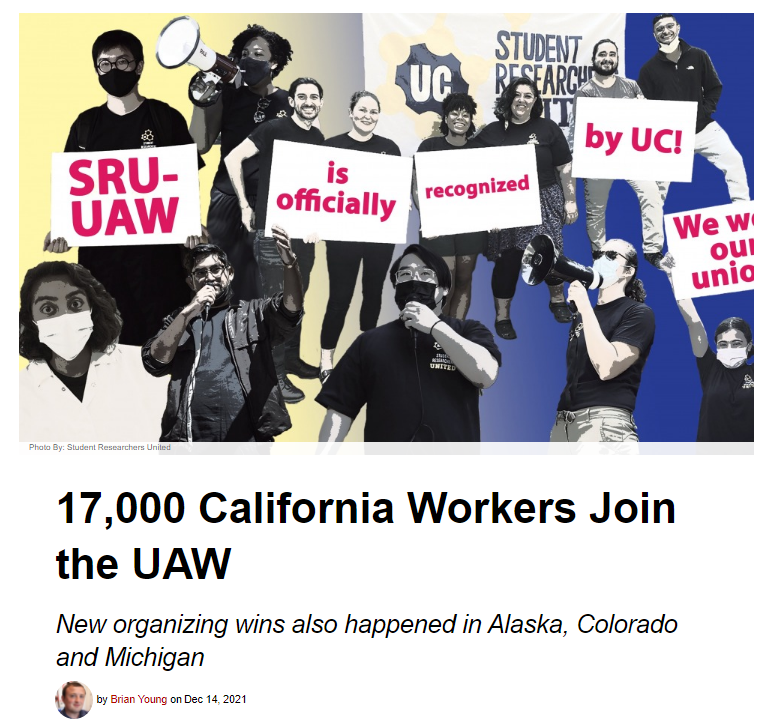 While a lot of attention over the past few months has rightly been on Workers striking for better wages and benefits, less attention has been paid to Workers organizing.

As UCOMM previously reported, for the first time Workers at a Starbucks in the United States were recently organized, but they are not the only new Workers to join the Union Movement.

In California, 17,000 Graduate Students within the University of California (UC) system joined Student Researchers United (SRU), which will be affiliated with the UAW.

Instead of going through a traditional Union Election, the students threatened to strike if the University Administration didn’t recognize their Union and the UC Administration subsequently agreed to formally recognize SRU as the Bargaining Unit of the researchers.

“The UAW is proud to welcome UC Student Researchers into our Union Family,” Cindy Estrada, UAW Vice President and head of the UAW Stellantis, Women’s, and Higher Education Organizing Departments, said in a news release. “They’ve shown what is possible when Workers stand together and refuse to be divided.  We look forward to supporting them as they bargain a strong first contract.”

The organizing of 17,000 people was by far the largest organizing victory in the United States in 2021.

While the University said that they supported the Union effort, they did fight with SRU to try and exclude Fellows and Trainees - roughly one-third of the Unit, but the Public Employees Relations Board (PERB) ruled in the Union's favor.

While not quite as many Members, Workers at Arctic Slope Telephone Association Cooperative (ASTAC) in Prudhoe Bay Alaska were deciding on whether to join the Teamsters.

Six of them ended up voting to join while one was opposed.

They will join Teamsters Local 959, based in Anchorage, and the Unit will be made up of all full-time and regular part-time Network Facilities Technicians.

While there were 202 eligible voters, only 135 took part in the vote with all of them voting in favor of joining the Union.

The Bargaining Unit there will be made up of 77 people who work as full-time and regular part-time Drivers, and Production and Maintenance Employees, including Baristas, Lead Baristas, Bakers, and Quality Control Employees who work at the Boulder Colorado facility.

They are the first Food Service Workers in the Boulder area to join a Union.

To Read This Organizing Labor News Story In Its Entirety, Go To: https://ucommblog.com/section/build-union/17000-california-workers-join-uaw