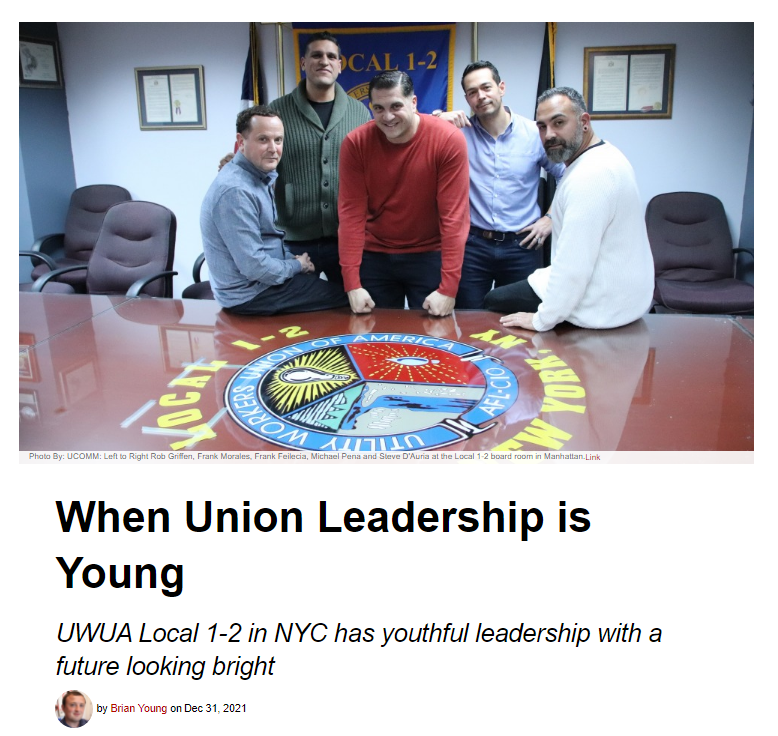 (NEW YORK CITY) - Throughout 2021, Unions have flexed their muscle - from strikes to organizing drives at some of the largest companies in the world, Organized Labor has been making headlines left and right.  Yet, as people’s perception of Unions continues to get better and more young people get involved in their Unions, some of Labor’s leadership has failed to adjust with the times.

As Baby Boomers begin to transition out of the workforce, Organized Labor has been forced to replenish their leadership ranks with younger leaders.

One Union that has met this challenge head-on is Utility Workers Union of America (UWUA) Local 1-2 in New York City.

This Union, whose biggest employer is Gas, Power and Electric Utility Giant Con-Edison, has made a careful concerted effort over the last few years to train and recruit young Members to take on leadership roles within the Local Union.

One of these younger leaders is Frank Dominguez, a 36-year-old Business Agent with Local 1-2 who started working at Con-Ed in Revenue Protection when he was just 19.

By the age of 20, he’d become a Union Steward, putting him on the fast track towards moving up within the ranks of his Union.

“When you’re young, people look at you two ways, either you are too young to do the job or this is someone who actually cares,” said Dominguez. “Luckily for me, I had a lot of people who took to me and saw I was a young guy who took the position on and helped mold me into what I am today.”

Unlike more mature Members whose kids are grown and out of the house, Dominguez has to juggle the late-night Union calls with the challenges of having young children at home.

“It’s not easy,” says Dominguez, “but leaders before me did it so I can too.”

Frank Morales, a 37-year-old, said being young and in leadership is the best of both worlds: “I have the hustle and ambition of wanting to do and learn more, while I have the experienced people teach me and guide me on how it is done.”

At Local 1-2, their commitment to training the next generation is partially possible because they have seasoned leaders who are willing to work with the younger guys and pass down their skills and knowledge.

Having young leaders has also helped the Membership of the same generation to feel like they have a relatable voice within the Union.

Many of the Members cited how retired Senior Business Agent Vincent Kyne was an instrumental figure in teaching them the right way to do things and trusting them with progressively more responsibility over the years.

“Kyne was my Business Agent and he saw how much effort I always put into it,” Morales said. “He always taught me and guided me and got me into the Shop Steward classes and got me into doing extra events.  I went from doing practically nothing with the Union to doing everything. Taking me under his wing and guiding and mentoring me turned me into what I am today.”

This type of organizational respect keeps this Local strong, especially during these trying and uncertain times with a deadly national pandemic and ever-changing energy policies in New York and in Washington.

To Continue Reading This Labor News Story, Go To: https://ucommblog.com/section/union/when-union-leadership-young