A Labor Perspective From Rutgers School Of Management & Labor Relations Professor Janie Fine: A Tornado Hit An Amazon Warehouse In Illinois And Killed Six Workers. âWould A Union Have Made A Difference?â 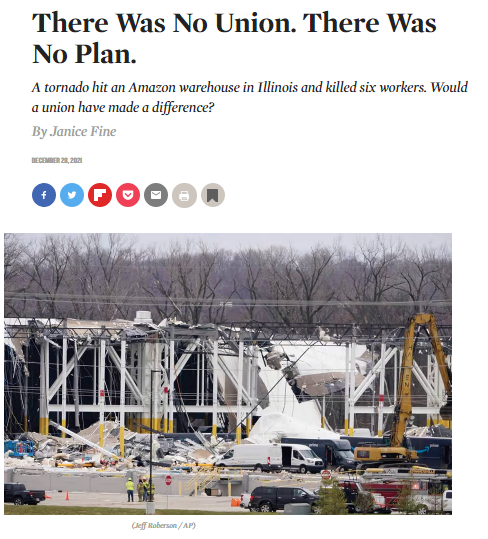 The Nation Editor’s Note: Janice Fine is a Professor at the Rutgers School of Management and Labor Relations and the Workplace Justice Lab@RU, as well as the Author of Worker Centers: Organizing Communities at the Edge of the Dream.

Although questions remain about the deaths of six Workers at the Amazon warehouse in Edwardsville, Illinois, we do know one thing: While extreme weather events are rare (although becoming increasingly less so), safety problems at Amazon are terribly common.

Its facilities are massive, the pace of the order fulfillment process is punishing and many buildings are not climate-controlled.

Turnover and injury rates are high.

According to the U.S. Occupational Safety & Health Administration (OSHA) data from 2020, for every 200,000 hours worked at an Amazon warehouse in the United States, there were 5.9 serious accidents, which is close to double the rate of non-Amazon warehouses - higher than construction, coal mining, and most manufacturing.

Two years ago, its global workforce numbered 650,000 - now it’s 1.2 million - and that doesn’t count the half-million Delivery Drivers in the U.S. who are contractors, but really should be considered Employees.

Labor Historians say that the closest comparisons are the hiring in the shipbuilding sector during the early years of World War II and in the post-war home building industry.

Many believed the company prohibited cell phones on the warehouse floor, so many people in the Edwardsville facility couldn’t monitor the weather, reach their families or contact emergency responders.

Supervisors ordered some workers not to leave.

Workers were left to shelter in the bathrooms.

And when the tornado hit, the roof and two walls collapsed, gas leaked into the building and six people died.

It appears there was no emergency plan.

Unions educate Workers about workplace hazards and protect their Members from retaliation if they speak up about dangerous conditions, but Amazon has gone to extreme lengths to keep Unions out.

Since 2020, there have been at least 37 charges filed with the National Labor Relations Board (NLRB) against Amazon in 20 cities.

In cases of extreme asymmetries of power between Workers and their employers, Unions have made an enormous difference to Worker safety.

So, might a Union in the Edwardsville facility have led to a different outcome when disaster hit?

To Directly Access This Labor Perspective, Go To: www.thenation.com/article/society/amazon-warehouse-edwardsville-tornado/?fbclid=IwAR1eVQFaVm4aneqNmdkWS0-YMTotB7pL23ZHA1TXae7RoPxSKv2jHoKVGm0