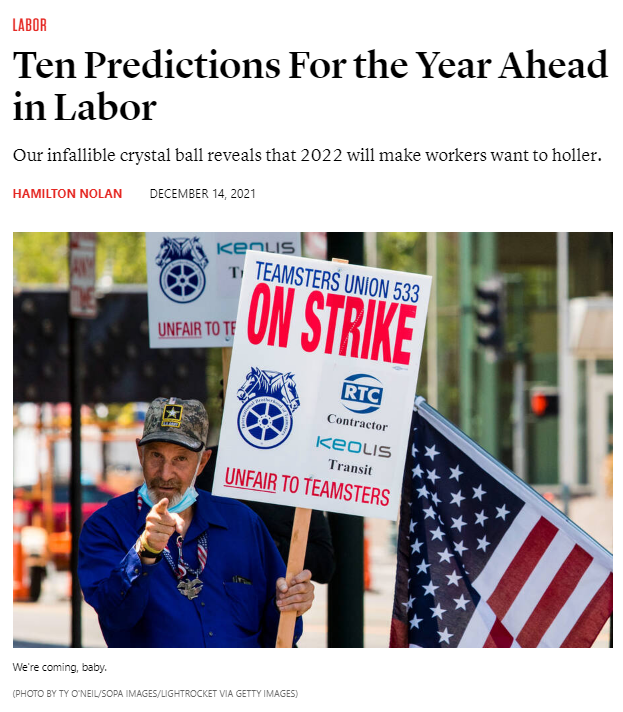 This is the time of year when many publications publish their âYear in Review pieces.

We already lived through the past year.

We know what happened.

One of the most valuable lessons a Journalist can learn is: Never make predictions.

You will inevitably end up looking dumb.

That said, here are 10 predictions for the Labor Movement in 2022.

I feel pretty confident about these and with any luck, none of you will remember to look back at them a year from now to check my work:

1 - Higher Ed Becomes A Serious Player In The Union World - The biggest new Union of 2021, by far, was formed by 17,000 Student Researchers at the University of California, who joined the United Auto Workers (UAW).  These sorts of Workers, along with Adjunct Professors and other Campus Employees, now make up significant chunks of major Unions like the UAW, the American Federation of State, County & Municipal Employees (AFSCME) and many others. This organizing wave is far larger than the one in the media industry, which has drawn more attention - but both represent the well-educated but underpaid segments of the American Workforce, perhaps the most fertile demographic for Union Organizing.  Because Higher Ed Workers are spread across many different Unions, they have yet to really begin throwing their weight around as a unified force within the Labor Movement, but look for that to happen soon, which will only feed into…

2 - Culture Wars In The Union World -America’s national political discourse is in the process of descending ever deeper into the realm of bullshit culture wars, a smokescreen for the far darker and more substantive disemboweling of Democracy as we know it.  This is bad.  Unions in general have stayed somewhat insulated from this culture warring - though fights over vaccine mandates probably fall into this category - but that simply cannot last.  If Unions focus their organizing on more educated and White Collar Workers rather than on all Workers, you can bet that outside forces who despise Unions will try to drive a wedge into the movement, portraying unions as elitist.  This is all bullshit.  Please prepare to ignore it.  Meanwhile…

3 - The Economic Situation For Workers Gets Worse - In a weird twist for a pandemic-scarred apocalypse, 2021 was absolutely fabulous for America’s Workers.  Wages rose most at the lowest end of the income scale, where gains were needed most.  Companies were forced to compete for labor, improving conditions across the board.  Demand was high, corporate profits boomed and workers felt safe enough to quit their jobs or to speak out for their rights.  Hope you all enjoyed that!  That set of conditions will not persist. 2022 will almost certainly bring higher unemployment, cooling demand, gripes over inflation and at least a partial reversion to the mean.  And on top of that…

4 - The Political Situation Gets Worse, Too - If you were disappointed with the relative paucity of progressive action that Democrats took while they had control of the entire Federal Government in 2021 - no PRO Act, no Voting Rights Bill and the big Social Spending Bill still up in the air - I have news for you: That was the high point!  Democrats will likely lose control of Congress in the 2022 Mid-Terms, gridlock will descend on Washington, D.C. (more so), and any legislative promises to Organized Labor that the Biden Administration hasn’t already fulfilled… well, don’t hold your breath.  And a little more bad news…

To Continue Reading This Labor News Story, Go To: https://inthesetimes.com/article/2022-unions-strike-wave-amazon-starbucks-labor