"In Solidarity With Partners In Buffalo, Boston, Knoxville And All Those Organizing Nationwide, We Believe There Can Be No True Partnership Without Power-Sharing And Equal Accountability." 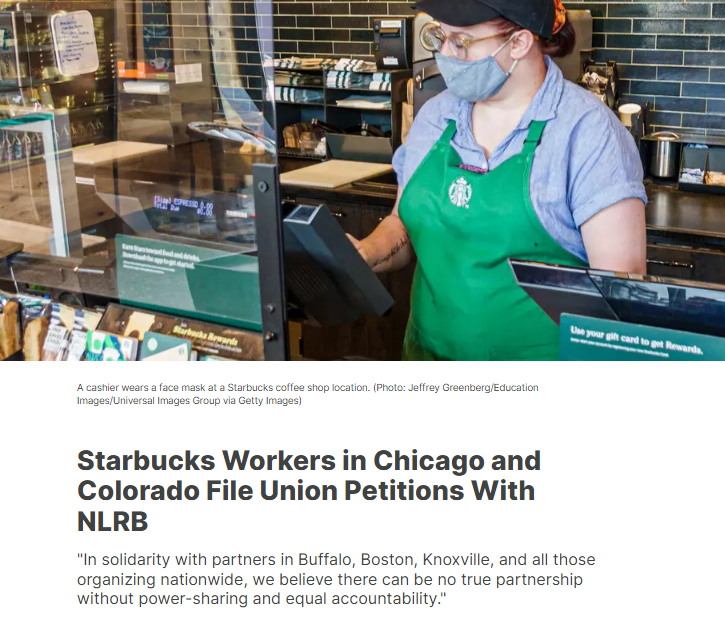 Capping off what Organizers and other Labor Rights Advocates in 2021 dubbed The Year Of The Worker, Employees at two more Starbucks stores are seeking to Unionize.

Workers at a pair of Starbucks locations in Broomfield, Colorado and Chicago, Illinois have filed Union Petitions with the National Labor Relations Board (NLRB), a Twitter account associated with organizing efforts at the coffee giant announced just before New Year’s Eve.

The filings follow the first-ever successful Union vote for at least one Starbucks in Buffalo, New York in December and ongoing efforts at locations across the country, which Workers - known as "Partners" - in Broomfield and Chicago noted in letters to President and CEO Kevin Johnson.

"As our fellow Partners in Buffalo, Boston, Knoxville, Seattle, Mesa and more have demonstrated, we believe there is no true partnership without the sharing of power, influence, accountability, and success," the Colorado Workers wrote.

"We are forming a Union to facilitate this belief, and to establish our voices and affect the change we need as true Partners to this company," they added, detailing the benefits of an organized workforce for not only employees, but also the company, and calling out Johnson and others in Starbucks leadership for their Anti-Union campaign.

"We are not frightened, we are not intimidated, but we are emboldened, we are disappointed, and we are outraged," the workers explained. "Our Unionization is a means to ensure Starbucks can be the best place it can be for all Partners, where genuine partnership is fostered, and sustainable, fulfilling careers can thrive."

The Chicago workers similarly wrote that "in solidarity with Partners in Buffalo, Boston, Knoxville, and all those organizing nationwide, we believe there can be no true partnership without power-sharing and equal accountability."

"Our goal in Unionizing is to achieve true partnership, not just the title of 'Partner.'  We see Unionizing as a commitment to making our store a staple in the community, and making Starbucks the great company we know it's capable of being," they continued.

Both groups of employees urged Johnson to sign a document attached to their letters detailing "fair election principles," which include recognizing "the right to organize a Union is a fundamental Civil Right essential to our democracy."

Other principles aim to protect Workers who are organizing, including: "If partners choose to Unionize, there will be no negative repercussions from management" and "Starbucks agrees not to make any implicit threats (lawful but unethical) or explicit threats (unlawful)."

The announcement about Broomfield and Chicago was celebrated by allies within and beyond those communities, from Colorado Independent Drivers United and Colorado Jobs With Justice to the Chicago Teachers Union.

While the NLRB earlier this month certified the results of the 19-to-8 vote in Buffalo, Workers United, the Union representing Starbucks Employees, filed formal objections regarding elections at two other nearby locations, citing company leadership's Anti-Union efforts.