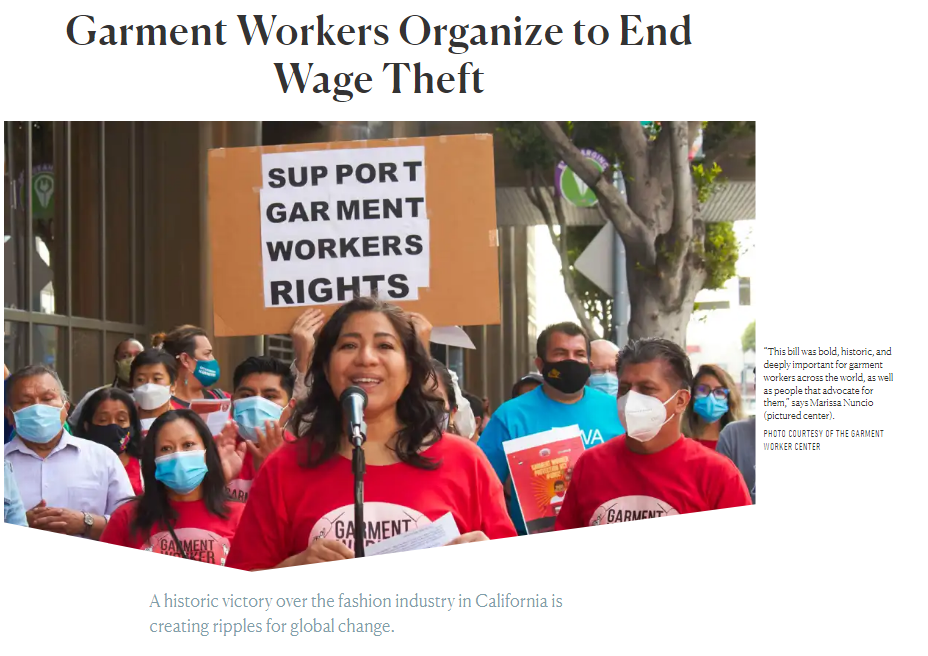 Daisy Gonzalez’s mother came to California from Guatemala in the ’80s and landed a job as a Garment Worker.

“My mother was a Trimmer and an Ironer.  I learned how difficult this work was for her body from her experience,” Gonzalez says.

Beyond the difficult conditions, the pay was equally abysmal.

She recounts her mother once working for a week, and the employer paying her just $30.

Her mother’s struggles opened Gonzalez’s eyes to the trenchant problem of “wage theft,” a phenomenon she says is built into the very fabric of the garment industry and its global supply chain.

“Fashion is built on colonial and racist structures,” says Ayesha Barenblat, the Founder and CEO of Remake, a community of Women’s Rights, Ethical Fashion and Environmental Advocates on a mission to shift the industry’s deleterious practices that harm workers and the planet.

For Barenblat, the long legacy of abuse by brands is inherently a feminist issue whose solutions must center justice.

“If you care about Women’s Rights and environmental justice, then you must care about how the fashion industry operates,” she says.

In 2013, the collapse of the Rana Plaza building on the outskirts of Dhaka, the capital of Bangladesh, captured global headlines.

The eight-story building housed shops and garment factories that produced clothing for major brands in the U.S. and Europe.

With a staggering death count of more than 1,130 Garment Workers, its collapse became the deadliest garment industry accident in modern times.

“Rana Plaza was not an accident.  This was corporate murder,” said Nazma Akter, a former child Garment Worker who has since become an internationally-acclaimed Trade Unionist and founder of Awaj Foundation, a group fighting for the rights of Bangladeshi workers in the apparel supply chain.

Around the world, Garment Workers - most of them women, and in some instances girls - have died or have been left disabled by a spate of disasters.

Just a year prior, Ali Enterprises in Karachi, Pakistan, burned down, killing more than 250 Garment Workers.

H&M, ZARA, and Tommy Hilfiger, among others, have sourced from factories that have seen avoidable fatalities of Garment Workers due to negligence and willful complicity.

“How many people will die for fashion, for cheap clothes that end up in the landfill anyway?,” Barenblat asks. “It is depleting and violent to women’s bodies and the environment.”

With its global tentacles of supply chain impacting Workers from Dhaka to Karachi to Los Angeles, Gonzalez says the fashion industry is predicated on harm and stolen wages - but the trillion-dollar industry and the dark shadow of its operations may soon have a reckoning.

Within the U.S., Los Angeles County is the biggest fashion manufacturing hub, where nearly 60% of Garment Workers are Women, a majority of them Latino, followed by Asians.

A key tool for wage theft in the fashion industry is the piece-rate system, by which employers pay Workers per unit of production instead of an hourly rate or a salary.

To Continue Reading This Labor News Report, Go To: www.yesmagazine.org/social-justice/2021/12/28/garment-workers-fashion-industry-wage-theft