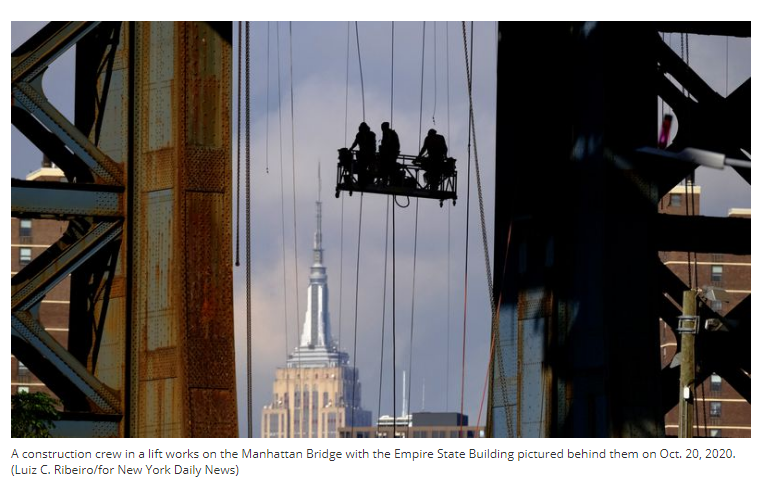 An obvious fact that many observers are just coming to realize in analyses of Mayor de Blasio’s legacy should come as no surprise: Raising the Minimum Wage had a remarkable impact on lifting the incomes of low-paid New York City Workers.

The gradual increase in the New York City Wage Floor from 2014-19 boosted the incomes of the bottom half by an historic degree, clearly establishing that state and local actions can move the needle on income inequality.

State actions increased the hourly wage floor in stages, reaching $15 for Fast Food Workers and Workers at large employers at the end of 2018.

Raising the wage floor to $15 benefited 1.4 million workers locally, 35% of the total.

The result of these local actions: Wages rose for workers in the bottom half by 28% to 40% between 2014 and 2019, with wages rising fastest for the lowest paid.

Coupled with sustained job growth pushing the city’s unemployment rate below 4% for two years prior to the pandemic, something unprecedented happened.

The share of total wages paid in the city going to the bottom half rose while the share paid to the richest 10% fell between 2014 and 2019, according to income tax data, the most definitive measure of income trends.

Granted, the highly paid 10% had a share that was nearly five times that of the lowest-paid half, but the lowest paid City Workers had never gained such ground during an economic expansion, when the highest-paid enjoy steady raises and big bonuses.

Moreover, the sustained wage gains for New York City’s bottom half meant that between 2014 and 2019, median family incomes rose faster than at any time since the 1960s, and Families of Color shared in those historic gains.

In fact, the wage gains for the city’s predominantly Service- and Blue-Collar Workers were substantial enough to mean that the share of total incomes received by the bottom half in New York City inched up from 6% in 2014 to 8% in 2019, while the share going to the richest 10% slipped from 65% to 62%.

Rising low wages together with large job gains pushed down the Federal Poverty Rate in the city by nearly five percentage points to 16% and cut child poverty by a quarter over five years.

A handful of other states and cities also raised their minimum wages to $15 (or higher) in recent years, but not enough Workers around the country saw wage gains to significantly increase the bottom half’s share of total wages or all incomes for the U.S. overall.

National figures show slight increases from 2014 to 2019 for the bottom half, while shares going to the richest 10% held steady.

To Continue Reading This Labor Perspective, Go To: www.nydailynews.com/opinion/ny-oped-how-to-help-nyc-working-class-20211229-vcgluxncarehnjb7xcv2elbqim-story.html