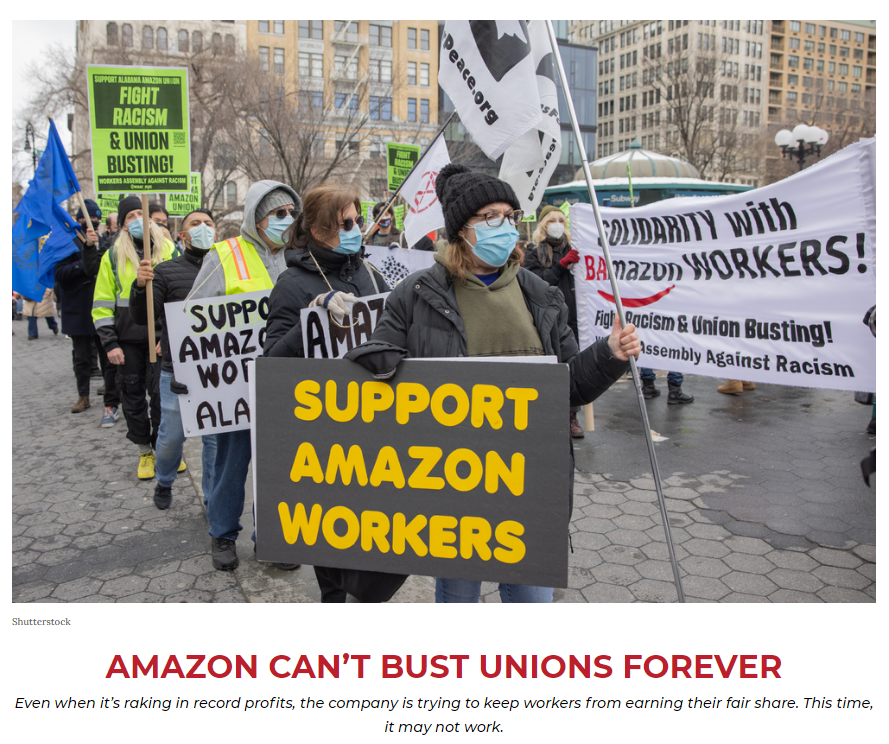 OtherWords.org Editor’s Note: Sonali Kolhatkar is the host of Rising Up With Sonali, a television and radio show on Free Speech TV and Pacifica stations.  This commentary was produced by the Economy for All project at the Independent Media Institute and adapted by OtherWords.org.

The National Labor Relations Board (NLRB) recently ruled that a historic Union vote among Amazon Warehouse Workers in Bessemer, Alabama was not valid.

The highly-publicized vote resulted in a resounding defeat for the Union in March 2021, with more than 70% of those voting choosing against Union Membership.

The Union accused Amazon of engaging in “efforts to gaslight its own employees” and filed a petition in April to nullify the vote.

After investigating, the NLRB agreed.

Federal Officials decided Amazon interfered so blatantly in its Workers’ ability to vote that a second election is now in order.

The ruling detailed how Amazon defied NLRB guidance and set up a vote collection box right outside the warehouse entrance, giving Workers the impression that it was involved in the vote counting.

The company also distributed “Vote No” paraphernalia to Workers in the presence of managers and held what the NLRB called “Captive Audience Meetings” with small groups of workers -  “six days a week, eighteen hours a day” - and blasted them with Anti-Union messaging.

The company “essentially hijacked the process and gave a strong impression that it controlled the process,” concluded NLRB Regional Director Lisa Henderson.

It’s no wonder that the election turnout was low – yet, Amazon has already begun paving the way for more interference.

According to Reuters, it’s again “forcing thousands of Employees to attend meetings” and “posting signs critical of Labor Groups in bathrooms.”

This aggressive pushback against a Unionizing effort at a single warehouse indicates Amazon’s absolute determination to deny workers a say in their labor conditions.

And it’s no mystery why.

A study of 20 years of wage data for the retail industry found a clear and growing advantage for Unionized Workers compared to Non-Union Workers, with the weekly wage gap between the two groups increasing from $20 in 2013 to $50 in 2019.

You can see the difference firsthand for Amazon’s Workers in Europe.

In November, Unionized Amazon Workers in Germany walked off their jobs for higher pay.

In 2020, Italian workers went on Strike for 11 days to win an extra five-minute break.

And during the early months of the Coronavirus Pandemic, French Unions successfully demanded Amazon suspend activity at its warehouses in the interest of Worker safety.

This sort of progress is exactly what Amazon wants to avoid in the United States, where numerous studies have detailed how the company mistreats its Workers.

To Continue Reading This Labor Perspective, Go To: https://otherwords.org/amazon-cant-bust-unions-forever/