âWhy 2021 Was The Biggest Year For The Labor Movement In Gamesâ - Working Conditions At Top Studios âHave Been Criticized Before, But This Year Saw A Significant Increase In Protests And Organizing By Employeesâ 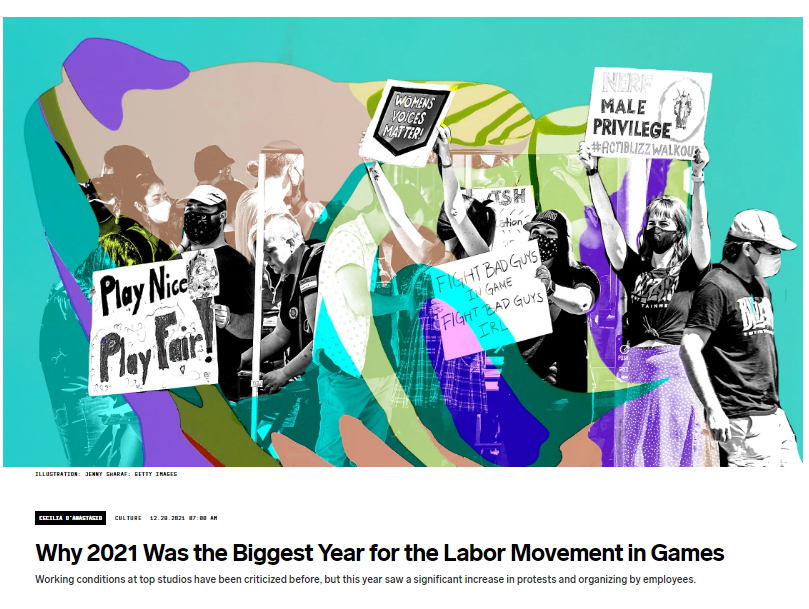 Marked by walkouts, strikes, petitions and open letters, 2021 was the biggest year yet for Workers in the U.S. video game industry taking a stand against labor conditions.

“In my experience, it actually isn't suffering that drives people to take the risk and organize,” says Tom Smith, Senior Director of Organizing for the Communications Workers of America (CWA), the country's largest Communications and Media Union. “It’s hope.  I think this is a moment in history in which both things are out there.”

Labor conditions in the games industry have been under scrutiny for nearly two decades.

In the early 2000s, whistleblowers called attention to crunch, the practice of pulling 60- to 80-hour weeks ahead of game launches - a labor tactic that continues to this day.

More recently, allegations of sexism and unequal treatment at top studios have roiled the industry.

In 2018, current and former Employees of League of Legends publisher Riot Games alleged that the company fostered a sexist “bro culture.”

At Ubisoft, in 2020 several Employees alleged that the company was steeped in sexism and that executives and HR failed to adequately handle complaints of misconduct.

At the time, Activision executive Frances Townsend described these allegations as painting a “distorted and untrue picture of our company, including factually incorrect and out-of-context stories.”

Onlookers assumed Riot Games would be the first company to coordinate a Union-like initiative after the outcry in 2018.

This protest also took aim at a clause in their contract compelling Employees into arbitration in lieu of taking complaints of sexism before a judge and jury.

“If you’d asked me in 2018,” says one current Riot employee who asked to remain anonymous for fear of retribution, “I thought we'd have a Union by now, too.”

To Continue Reading This Labor News Report, Go To: www.wired.com/story/2021-biggest-year-labor-movement-video-games/?fbclid=IwAR1aCeJno7sAiiW4ep2CCWJGFLQPHR6Rt06I2THpG9lMIGgnchmHYhOFcpU