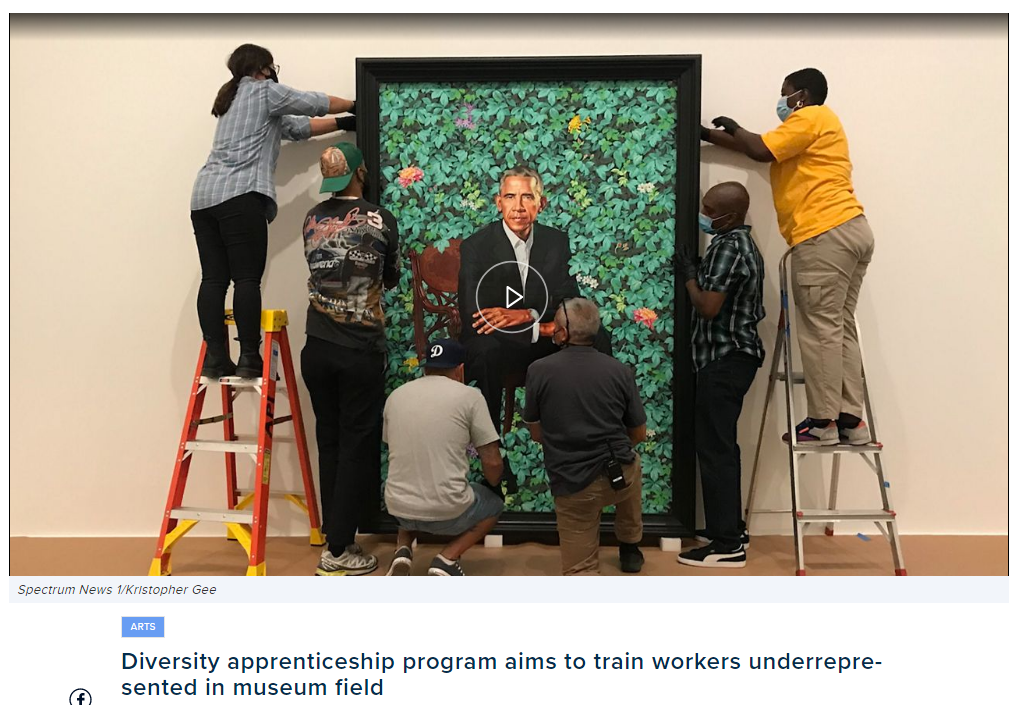 (LOS ANGELES, CALIFORNIA) - Davidra Jackson has been learning a host of new skills as an Apprentice in the Diversity Apprenticeship Program (DAP), an initiative of The Broad aimed at creating a more equitable workplace in the museum field.

The program provides a nine-month, full-time, paid Apprenticeship and trains individuals from underrepresented communities in art handling and preparation.

Jackson has been at LACMA (one of 18 SoCal Art Institutions participating in the Apprenticeship Program), working in the woodshop, which includes operating heavy industrial equipment and tools for art preparation and installation.

In 2015, the Andrew W. Mellon Foundation found 85% of Preparators and Art Handlers in museums identify as White and 75% as male.

The program partners with a host of arts institutions and organizations throughout SoCal as training grounds.

"It was terrifying at first because the loud noise always just kind of makes me apprehensive," Jackson said with a laugh. "Through the program I've been able to tackle that fear head on."

Jackson said most people do not know what goes on behind the scenes to make an art exhibition come together.

Jackson is just one of a handful of full-time, paid Apprentices in the program who rotate throughout several participating museums during their Apprenticeships.

"It feels very grounding," Jackson said about working in Art Prep. "I love when I can turn on some music and just get into it."

Lance Bad Heart Bull went through the Apprenticeship Program in 2019 and is now a full-time Preparator at the recently opened Academy Museum of Motion Pictures.

He said he is continually amazed at the range of historic items he gets to work with, from original "Star Wars" props to treasures from the Spike Lee collection, which are among his favorites.

“It’s so surreal,” Bad Heart Bull said. “Just opening (them) up, and you see that it’s the real thing, it’s like whaaaaat?”

Bad Heart Bull helped bring in Bruce the Shark, of "Jaws" fame, and has prepared and arranged iconic props to exhibit, such as the ruby slippers from "The Wizard of Oz."

"Everybody's going to see how it's all placed, and I was all, I did that!," Bad Heart Bull said.

DAP director George Luna-Peña said the idea for the program came out of some self-reflection within the Broad Staff itself.

"Our head Preparator recognized that the folks that she had hired to install our initial inaugural shows were mostly white, mostly men, and mostly from the Midwest," Luna-Peña said. "And so that was the seed that planted the Apprenticeship Program."

To Continue Reading This Apprenticeship And Training Labor News Report, Go To: https://spectrumnews1.com/ca/la-east/arts/2021/12/16/diversity-apprenticeship-program-aims-to-train-workers-underrepresented-in-museum-field