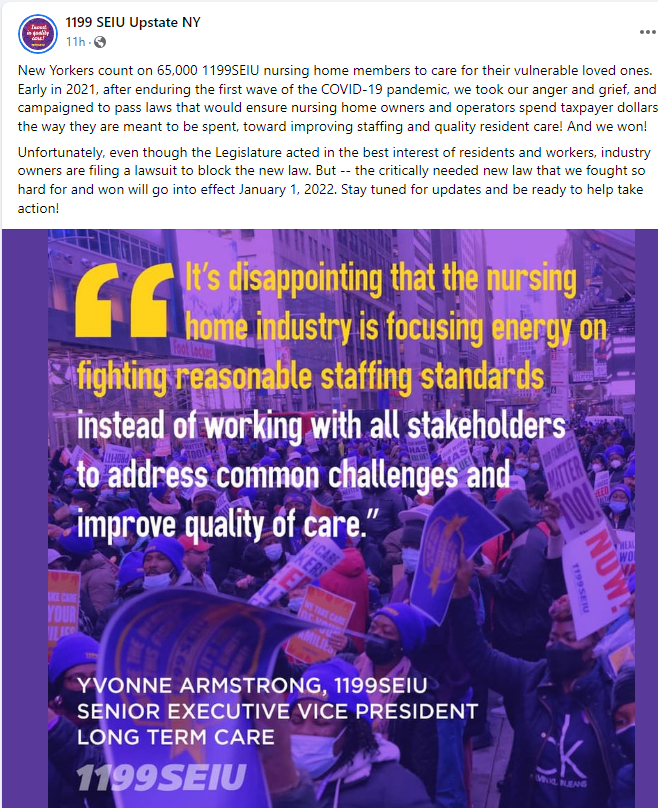 (ALBANY, NEW YORK) - More than 250 New York nursing homes and trade groups have filed a Federal lawsuit seeking to block a New York State Law that’s set to go into effect on January 1st requiring facilities to spend at least 70% of revenue on direct resident care, and at least 40% on Staff who care for residents, The Albany Times Union reports.

1199 Service Employees International Union (SEIU), which represents Nursing Home Health Care Workers across New York State, criticized the lawsuit and released a statement from1199 SEIU Long Term Care Division Senior Executive Vice President Yvonne Armstrong: “The Legislature acted in response to numerous concerns about low staffing and poor quality in our state’s nursing homes by passing a law to ensure that a largely for-profit industry spends the majority of its revenue on the residents in their care.  It is disappointing that the industry is focusing its energy and attention on fighting these reasonable standards rather than working with all stakeholders to address common challenges and improve quality of care.”

The lawsuit alleges the new requirements violate the U.S. Constitution as an improper "taking" of private property for public purposes and contradict the Supremacy Clause by confiscating Medicare funds.

It also alleges "procedural missteps" in the implementation of the law.

The new requirements were part of a budget deal reached last Spring over concerns of nursing home spending.

To Directly Access A Majority Of This Labor News Report, Go To: www.beckershospitalreview.com/post-acute/250-new-york-nursing-home-owners-file-lawsuit-to-block-staff-requirements-profit-cap.html