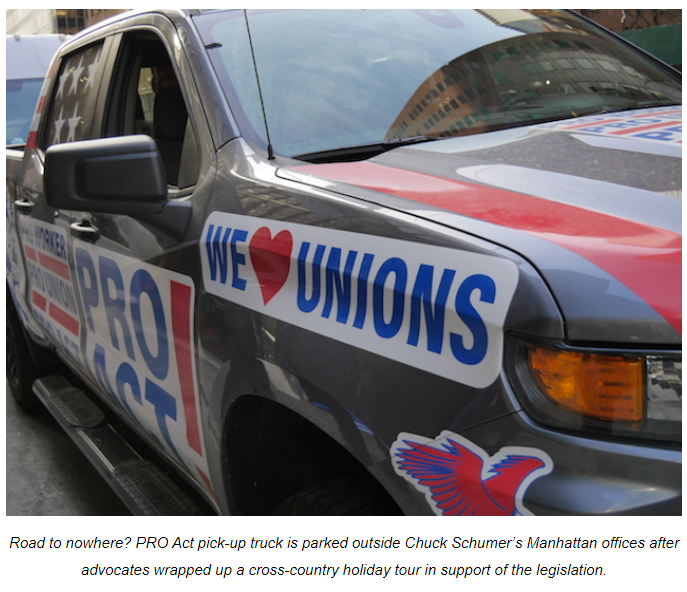 (NEW YORK CITY) - Working Men and women are rising up, risking all and taking collective action against unchecked exploitation in the era of Covid-19 and Senate Democrats had better catch up - that’s the message frustrated organizers wrapping up a fruitless 14-day, 3,126-mile journey across the country advocating for the Protecting the Right to Organize Act (PRO Act) delivered to Senate Majority Leader Chuck Schumer’s New York City doorstep earlier this month.

“Workers are leading the way right now, but we need more,” Our Revolution National Field Organizer Mike Oles told supporters gathered across the street from Schumer’s Manhattan offices. “We need the United States Government to step it up a little bit.  We need the Democrats who run this government (and) who say we’re Pro-Union.  We’re gonna put our money where our mouth is and we are going to throw down for the PRO Act.”

So far, Democrats have done more kowtowing to U.S. Senators Joe Manchin (Democrat-West Virginia) and Kyrsten Sinema (Democrat-Arizona) than “throwing down” for the most significant piece of Labor Rights Legislation to come along in more than a half-century.

The legislation could significantly eliminate existing barriers to workplace organizing and crack down on bosses denying Employees their right to Unionize.

“We’re seeing our whole economy and everything we understand change right in front of our eyes emerging from COVID,” said Steve Lawton, who serves as President of Communications Workers of America (CWA) Local 1102 on Staten Island, New York.

“We see how Corporate America is capitalizing on this moment and is hurting us all.  We see workers who took the brunt of this pandemic and continue to organize at Amazon and everywhere else, how they’re struggling.  That’s what this is about - how are we going to go forward into the future if we don’t change policy to equalize power between the Workers and the employer?,” Lawton said.

But the day after Christmas, U.S. Senator Ben Cardin (Democrat-Maryland) warned “a lot of us are gonna be disappointed” with the overall Build Back Better plan.

Oles’ cross-country pickup run, which started out outside Sinema’s Phoenix office before making other senatorial stops along the way - including Dallas, Memphis, Cleveland and Buffalo - skirted against the deadly tornadoes that ripped through the Midwest in December.

“Amazon workers in Illinois died because they were failed by Amazon,” Oles said. “They weren’t given a safe workplace.  They were told to keep on working through a tornado.  In (Mayfield) Kentucky, Workers died making candles for ($8 or $9) an hour.  People died in the middle of the night begging to go home.”

Schumer sent a message to PRO Act advocates reiterating his support for the legislation.

“These are nice words,” they said, “but what is needed is action.”

Despite Manchin’s continued opposition, the top Democratic powerbroker is vowing to bring the Build Back Better package to the Senate floor for a vote sometime early in the new year.

“We are going to vote on a revised version of the House-passed Build Back Better Act and we will keep voting on it until we get something done,” Schumer said in a December 20th letter to Senate colleagues.

Failing to deliver the good for working families is likely to prove devastating for Democrats during the upcoming midterm elections — and beyond.

To Continue Reading This Labor News Story, Go To: www.laborpress.org/what-if-democrats-fail-to-deliver-the-pro-act-for-labor/