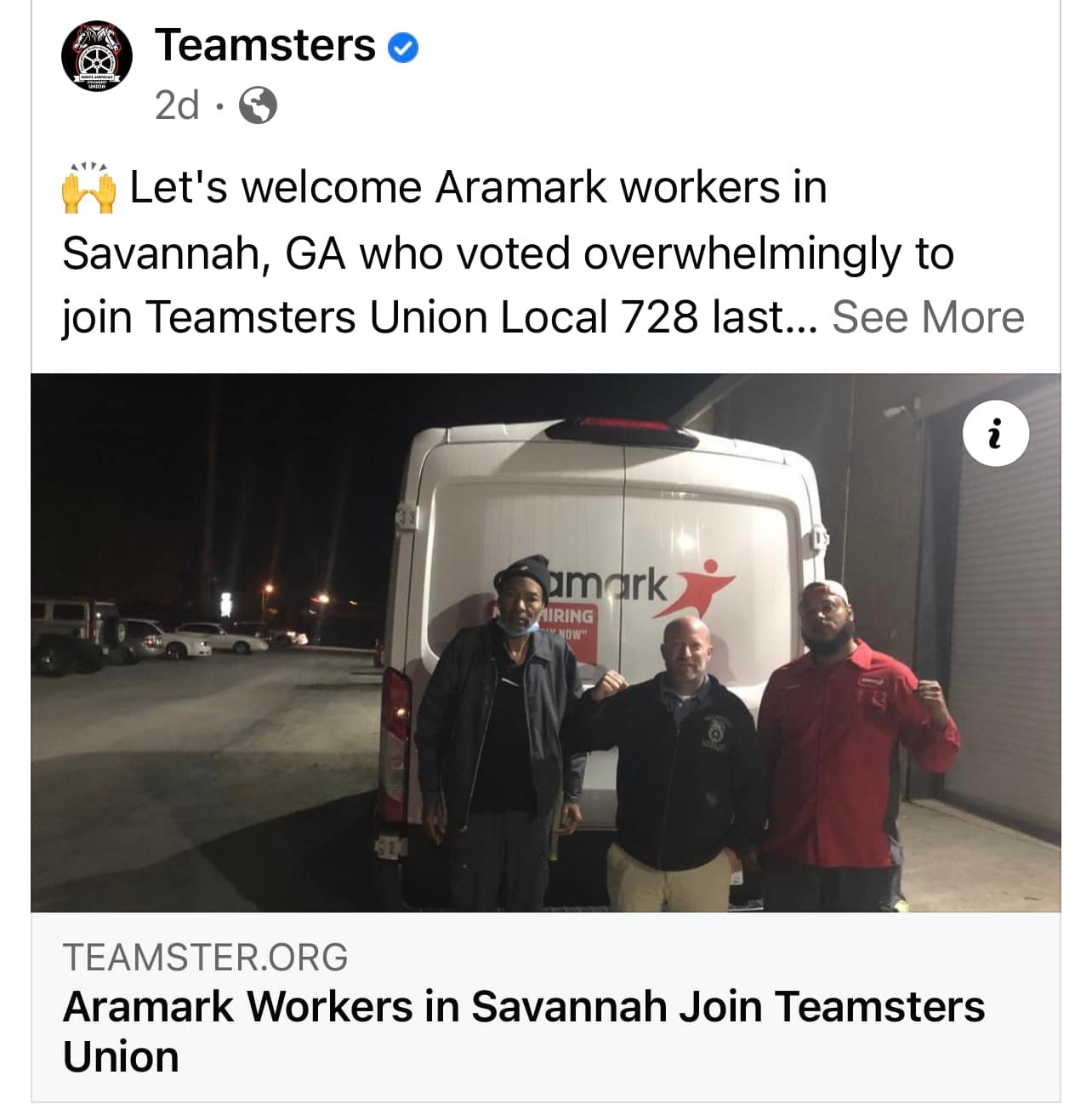 (SAVANNAH, GEORGIA) – After seeking a strong voice to address years of workplace concerns, 12 Aramark Workers in Savannah, Georgia have voted by a 2-to-1 margin to join Teamsters Local 728.

“This was a tough fight, but we stayed united to form our Union with the Teamsters,” said Will Montgomery, a Driver who’s worked at Aramark’s Savannah facility for two years.

“I came from an Aramark that was Union in Knoxville, Tennessee, represented by Teamsters Local 327, so I knew the value of working under a Union contract.  The contrast was stark.  In Savannah, we were getting pushed around and treated awfully - working ninety-plus hours in five-day periods.  We had to do something about it,” he said.

A leading voice in the Worker-led Organizing Committee, Montgomery was terminated illegally in retaliation for his strong support to form a Union with the Teamsters.

Local 728 is actively working for his reinstatement and has filed an Unfair Labor Practice (ULP) charge with the National Labor Relations Board (NLRB) for the company’s attempts to misinform, intimidate and retaliate against Workers during the organizing campaign.

“Within twenty-four hours of losing my job, Local 728 had me back to work at a Teamster-represented company.  They’ll do anything for us.  They go to the ends of the earth for Workers. The Teamsters take care of folks,” Montgomery said. “Even if I don’t go back to work at Aramark, I am proud of what we’ve accomplished.  This is a victory that will make a difference for years to come and help future generations of Workers.”

Teamsters Local 728 Vice President Chuck Stiles said: “Workers never let this company stop or scare them from doing what they knew was right.  These workers knew that if they worked together and formed a Union, they would have the power to make their jobs better for them and their families.  We’re glad they’ve joined the Teamsters to ensure a better, more secure future. Local 728 will be working with them as they make the change they want to see.”

The newest Members of the Teamsters Union stood up to Aramark’s Anti-Union Campaign and formed their Union to address years of issues, Stiles noted, including the need for respect on the job, fair wages, seniority rights, better health care and retirement benefits.

Founded in 1903, the Teamsters represents 1.4 million Members throughout the United States, Canada and Puerto Rico.