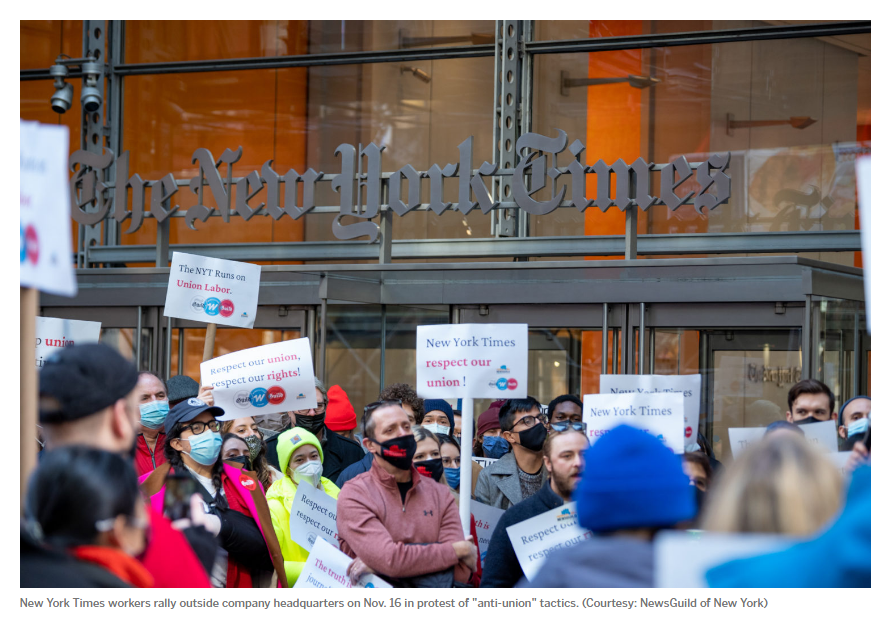 The Unionization Movement that started in 2015 shows little sign of slowing down.

Journalists across the country launched at least 35 Union Campaigns this year, the vast majority of which were successful.

Many of those campaigns were organized by the NewsGuild, the largest Union representing Journalists, which broke its annual organizing record.

This year, 1,542 Journalists from 26 workplaces joined the union.

The NewsGuild also organized an additional 16 non-media workplaces, giving it a total of 2,128 new Members in 2021.

It set its previous record in 2019 when 1,499 Workers, both media and non-media, joined the Union.

“You’re looking at exponential numbers of Journalists joining a Union and Unionizing their workplace, and I think that will continue to grow,” NewsGuild President Jon Schleuss said.

“My goal - and the goal of the Guild in general - is we want to organize as many Journalists as possible to help protect them, protect their jobs, increase their wages, their benefits (and) to protect and save local news,” he said.

This year saw several large newsrooms with upwards of 100 employees each Unionize, including Insider, Politico, Forbes and The Atlantic.

Units at all four newsrooms joined the NewsGuild.

In perhaps the most high-profile failed Union Drive in recent years, 150 workers at Medium had to halt their organizing efforts with the Communication Workers of America (CWA) this Spring after they lost an on-line election to determine support for a Union.

After the vote, Vice reported that Medium CEO Ev Williams e-mailed Staff announcing changes to the company’s editorial strategy and inviting Journalists “who would like to take a different path” to quit.

Aside from the Medium effort and a failed drive at Tegna-owned station WTIC-TV in Hartford, Connecticut, virtually every other Union Drive at a media organization this year has been successful.

This is in line with Union trends from previous years.

A Poynter analysis revealed that in recent years, the success rate for Media Union Drives that went to a National Labor Relations Board (NLRB) Election regularly topped 80%.

Both the NewsGuild and the Writers Guild have not lost a single election to Unionize a newsroom in nine years.

And Workers at a handful of newsrooms are still waiting to see whether their Union Drives will succeed.

Of these, the largest is the Times Tech Guild, which is organizing with the NewsGuild to represent more than 650 Tech Workers at The New York Times.

The company has refused to recognize the Union, forcing the issue to an NLRB Election.

To Continue Reading This Labor News Report, Go To: www.poynter.org/business-work/2021/2021-was-another-successful-year-for-journalisms-unionization-movement/