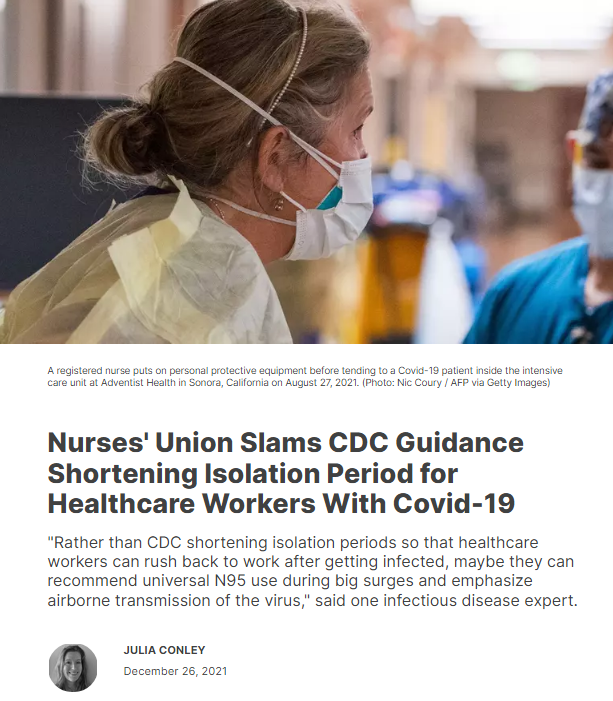 The largest Nurses' Union in the United States is condemning the Centers for Disease Control and Prevention's (CDC) decision to shorten the recommended isolation period for Health Care Workers who test positive for COVID-19, saying the move could be "dangerous" for both Workers and patients.

National Nurses United (NNU) released a statement, a day after the CDC released new guidelines saying Health Care Workers who test positive for the disease will be able to return to work after seven days instead of 10 as long as they are asymptomatic and have a negative test.

The "isolation time can be cut further if there are staffing shortages," according to the agency.

The loosened guidelines are the result of health care companies' desire to maintain "business operations, revenues and profits, without regard for science or the health of Employees and the public," said NNU President Zenei Triunfo-Cortez, a Registered Nurse (RN).

"Weakening (COVID-19) guidance now, in the face of what could be the most devastating (COVID-19) surge yet, will only result in further transmission, illness, and death," said Triunfo-Cortez, referring to the Omicron variant which is now driving infections in the United States.

The seven-day average of new daily cases topped 197,000 on Friday, skyrocketing by 65% over the previous 14 days.

Hospitalizations have also increased by 10% over the past two weeks, with officials in Massachusetts and other states calling in the National Guard to help overwhelmed Hospital Staff.

The outbreak is "significantly diminishing" the Health Care Workforce as Nurses and other personnel become ill, Georges Benjamin, the Executive Director of the American Public Health Association, told The Guardian last week.

The American Nurses Association (ANA) has called on the Biden Administration to declare the current shortage of Nurses a national emergency.

Under the CDC's new guidance, in crisis conditions caused by a severe shortage of Workers, infected Health Care Workers could face "no work restriction" if they test positive for COVID-19.

The agency also indicated that fully vaccinated Health Care Workers who have had booster shots will not be required to quarantine after a high-risk exposure, guidance which "ignores basic tenets of infection control and the precautionary principle," the NNU said.

"A more effective response to the rapidly spreading Omicron variant would be for the CDC to improve existing post-exposure guidance to fully recognize that this virus is airborne and to strike the false equivalency between face masks and respirators," the Union added.

Some public health experts have expressed support for the CDC's new isolation guidelines, but Workers' Advocates are concerned that other industries will begin pushing for shorter quarantine periods - as some airlines have.

Sara Nelson, the President of the Association of Flight Attendants (AFA), denounced a request to the CDC by Delta Airlines to shorten the 10-day isolation period for vaccinated Airline Workers who become infected with breakthrough cases to just five days.

Cutting the isolation period in half in the interest of protecting airlines' operations "may put Flight Attendants in a position to be forced to come back before they feel better," Nelson told CNBC.

"Flight Attendants should not be expected to return to work until they test negative and do not exhibit symptoms," Nelson wrote to CDC Director Dr. Rochelle Walensky on Thursday. "We do not know if ten days represents that 'magic number' but we do not see the justification for reducing the number of days at this time."

Hundreds of flights were canceled in the U.S. on Sunday, a day after the Omicron surge was linked to the cancellation of thousands of flights on Christmas Eve and Christmas Day, with Crew Members calling in sick.

"This is Omicron," tweeted Health Reporter Helen Branswell of Stat News. "When everyone gets sick at once, systems can't cope."

To Directly Access This Labor News Story, Go To: www.commondreams.org/news/2021/12/26/nurses-union-slams-cdc-guidance-shortening-isolation-period-healthcare-workers-covid