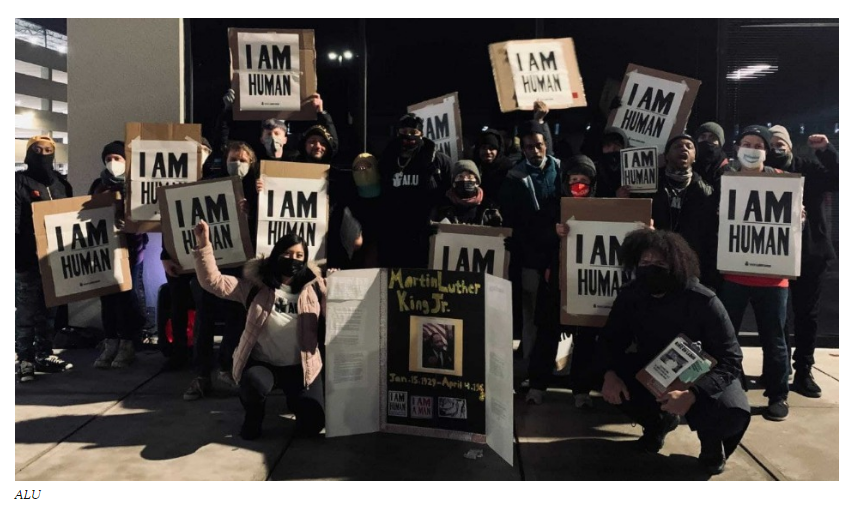 (NEW YORK CITY) - New York City Amazon Workers who are attempting to organize the JFK8 Fulfillment Center on Staten Island are calling on the National Labor Relations Board (NLRB) to find “new remedies” to existing rules that have made Unionizing inside the company’s massive warehouses next to impossible.

The Amazon Labor Union re-filed for a Union Election on December 22nd, with nearly 3,000 Union Cards.

The NLRB decided last Fall the Union needed to withdraw an earlier petition because it failed to reach the 30% threshold needed to trigger an election.

“The NLRB decided that we needed to withdraw that petition because Amazon fired nearly half of the Workers that we signed up in less than six months,” ALU Founding Member Chris Smalls told supporters in Times Square last week.

“This time around we are not going to withdraw.  We on calling on the NLRB to use remedies that go around the (30%) because the turnover rate at Amazon is (150%).  There’s no way that you can outmatch a turnover rate of (150%),” he said.

At the same time, ALU attorney Seth Goldstein has helped secure a new national agreement with Amazon, whereby the company must now inform its massive workforce about their rights to Unionize.

The agreement follows the arrests of ALU Members Bret Daniels and Connor Spence this past Summer on Staten Island.

“This is the largest NLRB settlement since the enactment of the National Labor Relations Act in (1935),” Goldstein said. “Over a million employees will be notified by Amazon that they violated certain aspects of Labor Law.  What they were doing was, they were threatening our Union Organizers with being charged with the police or being kicked off property for engaging in actives that are protected under Section Seven of the National Labor Relations Act.”

Amazonians United - another group of workers struggling to Unionize their workplace in Chicago - are also signatories of the agreement.

“We partnered with (Region 13) Workers who also had similar charges,” Goldstein said. “So, the Board consolidated our cases together and we had the agreement signed by the Regional Director in Chicago.  What does that mean?  Besides the fact that over a million Employees will be notified, those notifications will be placed on (Amazon’s) A to Z app, e-mailed to employees and will be posted in every facility from Hawaii to Maine.”

According to Goldstein, the NLRB now also has the right to go to court and get an injunction against Amazon should the company default on the agreement.

Amazon workers in New York City and Chicago briefly walked off the job earlier in the day on December 22nd to protest deteriorating working conditions and ongoing Worker exploitation.

One ALU Member identified as “Madeline” said that she and a Co-Worker were both sexually harassed on the job for weeks and given the bureaucratic runaround before Amazon finally took action against the alleged perpetrator.

“He kept coming into where I worked every single day and they would kind of move him after about thirty minutes of him being there,” she said. “It became overwhelming.”

The ALU says “Amazon has designed their system for dealing with sexual harassment cases to remove all accountability.”

The ALU Member said there are other Amazon Employees accused of sexually harassing other Co-Workers who continue to be employed.

To Continue Reading This Labor News Report, Go To: www.laborpress.org/amazon-labor-union-calls-on-nlrb-to-grant-election-trumpets-groundbreaking-labor-agreement-with-online-giant/