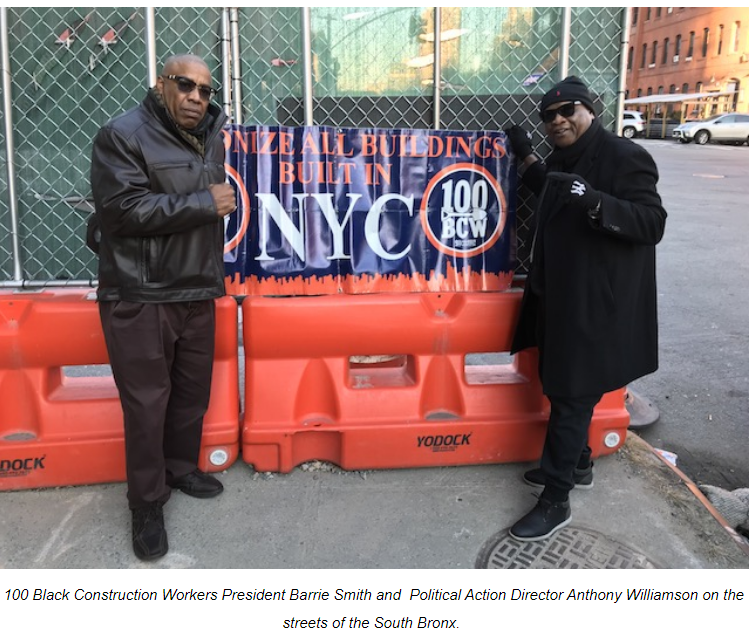 “This job site here,” Smith says, pointing up at the $1 billion luxury-housing project by the Harlem River waterfront, it’s the largest construction job in the city that’s using Non-Union labor.

And Non-Union, they add, means the mostly Black and Latino Workers are getting paid minimum wage or maybe a couple dollars an hour more, with no medical benefits, and many of them are undocumented Immigrants or are former prisoners hired through labor brokers called “Body Shops.”

“We are vanguards for Non-Union Workers,” says Smith.

Founded about 13 years ago, 100 Black Construction Workers functions as a constituency group within Laborers Local 79, where both Smith and Williamson are now on the Board of Directors.

Its main focus is economic justice, but also to educate people, especially non-Whites, about Unions, to counteract the once-often-true stereotype that the Building Trades are segregated – “To make it visible, says Smith, that “there are People of Color who have Union Books, who are Construction Workers.”

Local 79 is now more than half Black, Latino and Asian, they note.

The group also aims to diversify the Union’s Leadership, such as Shop Stewards and Officials.

It’s important to have decision-makers and not just figurative leaders, Williamson says.

It’s also campaigning for more vocational training and to help released prisoners re-enter society by getting them good jobs.

“I’d rather see someone with a shovel in their hand than a gun,” Williamson says.

The majority of Non-Union jobs, says Smith, are using Body Shops to hire former prisoners, who can be sent back to prison for violating parole if they don’t stay gainfully employed.

It’s a deeply personal issue for Smith, who grew up in public housing in Brownsville.

“My mother raised me correctly,” he says, but when he was a teenager in the 1980s, the neighborhood’s street culture heeded Tony Montana, Actor Al Pacino’s cocaine gangster in the movie Scarface, more than it did maternal messages about education, respect and showing up not just on time, but “before the time.”

He was convicted of murder, later vacated and reduced to felonious assault, and served 17½ years in prison.

His mother died a few months before he was released.

When he got out, he recalls, he was trying to support his four adopted siblings, his wife and two stepchildren on a $5.15-an-hour minimum-wage job.

“I never had the opportunity to work safe,” he says. “I had so much pressure on my back.  I promised my mother I would stay free and do the right thing.”

The day his Parole Officer warned him he would get a violation if he didn’t keep a job, he says, he asked an Irish supervisor at a construction site in Washington Heights if he could get a job there.

“He gave me the opportunity,” Smith recalls.

He began doing masonry, laboring and fireproofing, and got sponsored into Local 79.

He went on to become a Shop Steward, but then became seriously ill, he says, from carbon-monoxide poisoning sustained while working Non-Union jobs.

He was a Volunteer Organizer on Build Up NYC, a 2013 campaign by the Building Trades Unions, Service Employees International Union (SEIU) 32B, and the Hotel Trades Council to persuade developers to use Union labor, along with several other founders of 100 Black Construction Workers, among them Justice Favor, now a Local 79 Staff Organizer.

To Continue Reading This Labor News Story, Go To: www.laborpress.org/100-black-construction-workers-social-justice-through-trade-unionism/