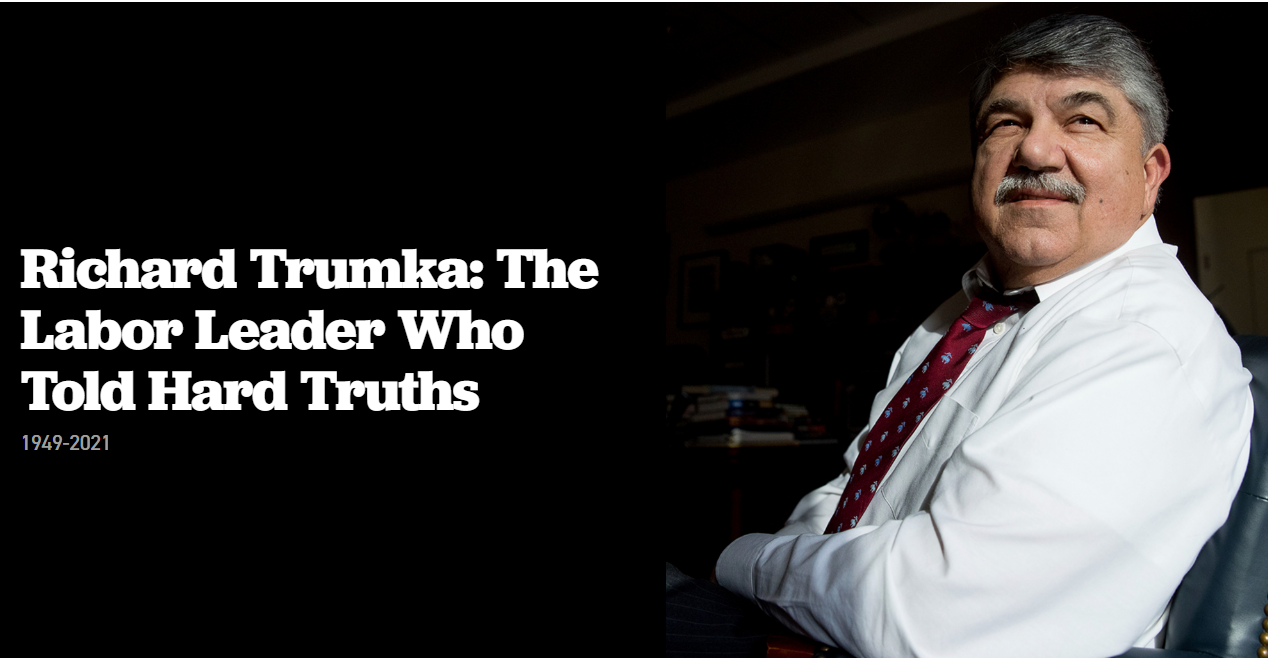 There weren’t many strikes in recent decades in which Working People scored big victories, but the 1989 Pittston Strike was one.

Two years earlier, the Pittston Coal Company, in Pennsylvania, dropped out of a trade group that had negotiated a Union contract with the United Mine Workers and the company demanded cuts to Miners’ health benefits.

A standoff ensued and for more than a year Pittston’s Miners worked without a contract and, therefore, without any health benefits at all.

Mine Workers have a violent history and Trumka’s instructions weren’t heeded by every last Miner - but for the most part, the Rank-and-File obeyed his directive.

Trumka, who died in August at 72, went on to become President of the National AFL-CIO - the largest Labor Federation in the United States, where he continued to urge Working People to heed the better angels of their nature.

At a time when Organized Labor’s political and economic strength were in retreat as Union Membership dwindled, Trumka filled the gap with moral leadership.

Even Thomas Donohue, former President of the National AFL-CIO’s sworn enemy, the U.S. Chamber of Commerce, praised Trumka after his death as “a patriot who never let the fight for his cause eclipse the cause itself.”

Trumka never flinched from telling the rank and file Union Members the hard truths they didn’t want to hear.

In an October 2008 speech to (predominantly White) Steelworkers, Trumka said: “There’s not a single good reason for any worker, especially any Union Member, to vote against Barack Obama” - and “only one really bad reason … and that’s because he’s not white.”

In 2016, as Donald Trump’s Presidential bid drew growing support from the White Working Class, Trumka distributed a pre-primary video for Union Members where he voiced his own opinion of Trump.

Trump wanted to “divide and deport Immigrant families” and “says it’s okay to treat people differently just because of their religion,” Trumka said.

“I’ve heard that kind of thing before - politicians trying to divide Working People,” he continued. “Every time we listen to that kind of talk, in a coal mine, or an office, or a factory, or in a voting booth, we end up weaker and poorer.”

Trumka wasn’t supposed to say any of this, because the National AFL-CIO had an intricate internal process for Presidential endorsements, with a Political Committee and an Executive Council and a lot of sensitive egos.

The National AFL-CIO wouldn’t issue its endorsement for six months, when it came out for Hillary Clinton - but Trumka’s loathing for Trump was visceral.

Trump didn’t much like Trumka either, once tweeting that he “represented his Union poorly.”

Yet Trumka set differences aside and signed on to Trump’s new North American Trade Agreement, which for the first time allowed international inspection teams into Mexican and American factories to investigate whether Workers’ rights were upheld.

He was aware that he was taking on some risk of assisting Trump’s re-election, which of course Trumka vigorously opposed, but he committed the National AFL-CIO to support the policy anyway, because it was the right thing to do.

It was the first trade agreement the group had endorsed in 18 years.

Shortly before his sudden death, from a heart attack, Trumka was asked whether he supported vaccine mandates.

The logical answer was, of course, yes as Union Leaders are responsible for protecting the health and safety of workers - but it was a surprisingly touchy issue.

Union Leaders, including Randi Weingarten of the American Federation of Teachers (AFT), were starting to voice hesitation - but Trumka nipped such opposition in the bud by lending vaccine mandates his strong endorsement.

“If you come back in and you’re not vaccinated, everybody in the workplace is jeopardized,” he told C-SPAN.

Yes, the Labor Movement declined in numbers on Trumka’s watch - Union Density or the proportion of American Workers covered by a Union contract, has been falling since the 1950s.

Trumka couldn’t reverse that, but he provided an example of moral courage that the Labor Movement - and the rest of us - would do well to follow.