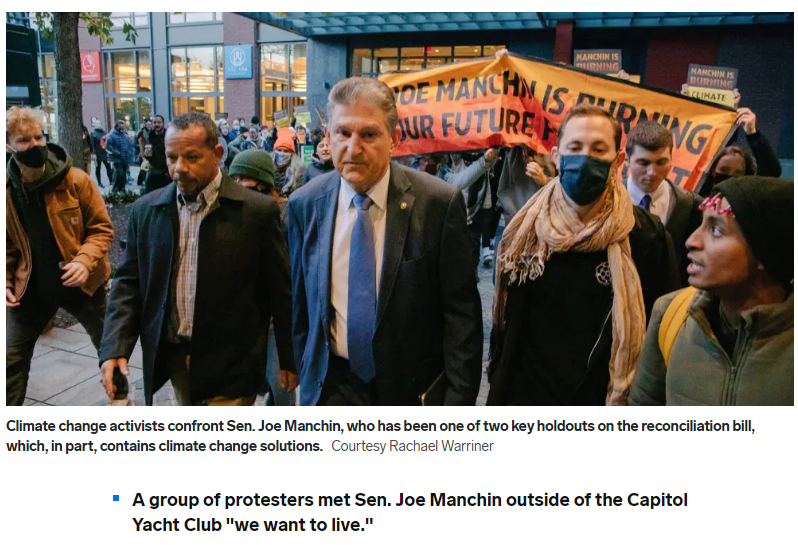 (WASHINGTON, D.C.) - Joe Manchin has spewed reason after reason for killing President Joe Biden’s signature Build Back Better plan but left out the real reason - based on campaign contributions and on his personal millions of dollars in wealth, he is a creature of the dirty Fossil Fuel Industry in the United States.

However, Manchin has provided a host of other reasons behind his knifing of the Bill.

Manchin says Democrats have refused to attach “work requirements” to social benefits in the Bill, an explanation that is particularly outrageous considering the Child Tax Credits in the current rescue package - which would be extended by the Build Back Better Bill - have allowed millions of Workers to return to work.

Melissa Parks, a resident in Chicago’s Wentworth Houses, has three children for each of whom she has been receiving $250, for a total of $750 each month since August.

The money has allowed her to take care of her children and work full time since then for a local publishing company.

The funds, under Biden’s recovery plan, would continue only if the BBB plan, now killed by Manchin, had passed.

Parks hasn’t fully figured out what to do, but she said she will try food banks at local churches.

What really bothers him about the Bill is that it impacts his campaign contributors and his own personal wealth is the section of the Bill devoted to battling climate change.

What Manchin really wants to kill the most is the Bill’s provision to spend $555 billion to switch the country over to wind and solar power and away from fossil fuels, including and especially dirty coal.

His move confirms the fears of progressive Congressional Lawmakers that they would lose leverage if they approved the Infrastructure Bill before Build Back Better.

They were angry, but not surprised about Manchin’s announcement.

They point out that Manchin ran against President Obama’s Climate Change Legislation in 2010 and got elected to the Senate on that platform.

Manchin pulled the typical Republican negotiating trick with the Build Back Better plan, forcing the removal of parts of the Bill that would impose penalties on electric utilities that continue to burn coal.

Despite those concessions made to him, Manchin killed the Bill anyway.

Manchin has received more campaign money from oil, coal and gas companies than any other member of the U.S. Senate.

Democrats hoped that by substantially weakening penalties against those companies when they violate clean energy standards they could win Manchin’s support – but he essentially told them where to go as he announced his opposition to the Bill, despite those concessions.

To Continue Reading This Labor News Report, Go To: www.peoplesworld.org/article/millionaire-manchins-coal-money-behind-his-knifing-of-build-back-better/