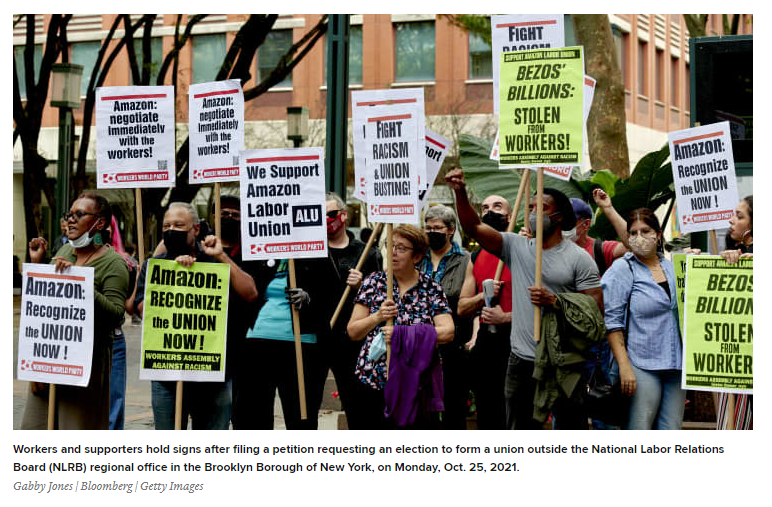 The group, known as the Amazon Labor Union, first filed its request for a Union vote in late October with signatures from more than 2,000 employees, but last month the petition was withdrawn after the NLRB determined they needed wider support to spur a vote.

NLRB spokesperson Kayla Blado confirmed the Amazon Labor Union is in the process of submitting the paperwork to file for a Union Election.

The group has submitted the initial petition to kick off that process, but has yet to file two remaining documents, including a showing of interest, which indicates it has met the required threshold for employee signatures, the NLRB said.

The NLRB requires Employees collect signatures from at least 30% of workers in the potential Bargaining Unit in order for a Union Petition to be granted approval.

The Staten Island warehouses employ roughly 5,500 workers, according to Bloomberg.

Amazon Labor Union said in a release last week that it has “signed up thousands of Staten Island Amazon Warehouse Workers who want a Union.”

The Union Campaign has primarily been focused at one of Amazon’s largest warehouses on Staten Island, called JFK8.

Smalls, a former Amazon Worker who was fired after he organized a protest at the facility, and other workers have had a tent set up outside JFK8 for the past several months, offering food and campaign materials in a recruitment campaign.

The group’s held a “lunch-time walkout” last week to urge Amazon to “immediately recognize the Union,” it said in a press release.

In addition, the group has called for higher wages, safer working conditions, longer breaks and improved benefits, such as enhanced Medical Leave Options and additional paid time off.

Should the NLRB approve the group’s request for a Union Vote, it would kick off the second such in less than a year.

In April, a Unionization Drive at one of Amazon’s Alabama warehouses was defeated.

But that Labor battle isn’t over.

Late last month, the NLRB authorized a new Union Election at the Bessemer, Alabama facility after finding Amazon illegally interfered in the vote.

To Directly Access This Labor News Story, Go To: www.cnbc.com/2021/12/22/amazon-warehouse-workers-on-staten-island-refile-union-petition.html