Investors To Starbucks: âWork Withâ The Union - A Group Of Investors âUrgesâ The Coffee Giant âTo Stopâ Union Busting & Work With The New Union In Buffalo 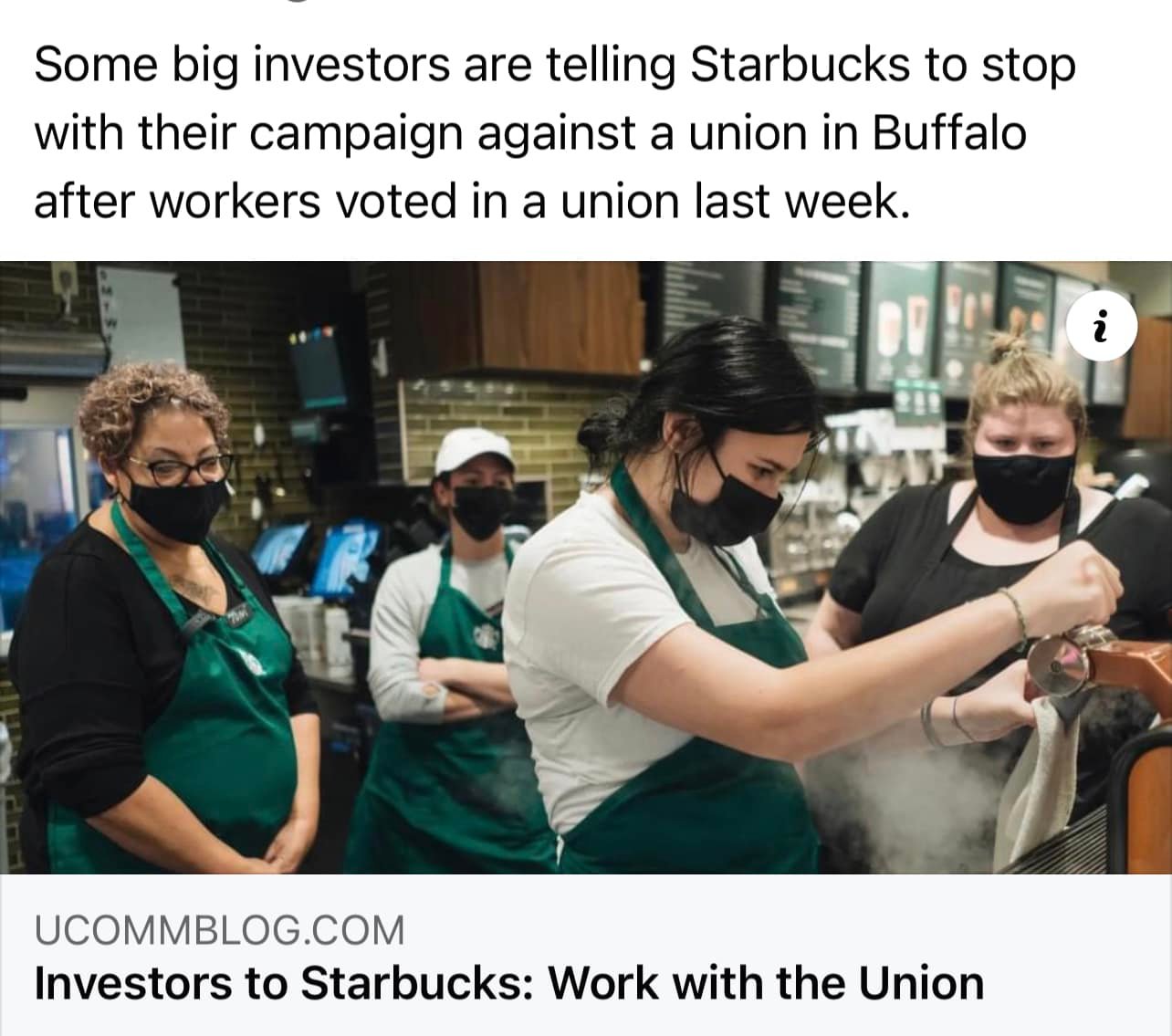 Earlier this month, a Starbucks location in Buffalo, New York became the first U.S. location to Unionize and another Buffalo area store also appears to have voted to support the Union - although Starbucks is contesting the vote.

Even though the Union only currently includes a few dozen workers, the company spent a lot of money and time trying to stop the Union Drive.

This included bringing in high-priced Anti-Union Consultants and even flying former CEO Howard Schultz in to talk to the Workers.

Now they are also getting support from an unlikely source, Wall St.

In a letter sent to the company, a group of investors that is worth over $1.3 trillion in assets under management, urged Starbucks to respect the wishes of the Workers and negotiate with the Union.

High profile people who signed off on the letter include New York City Comptroller Scott M. Stringer - who manages over $266 billion in pension fund assets for New York City, the Northwest Coalition For Responsible Investment, and the Sustainable Advisors Alliance.

Trillium Trading, which owns about $48 million in Starbucks shares, also signed onto the letter.

In the letter the investors said: We are writing to urge the Company to accept the results of the December 2021 election and proceed expeditiously and in good faith according to the results.  As investors, we believe that Starbucks should abide by international standards and best practices and its own words about engaging in good faith with Workers to maintain positive labor relations.  Effective human capital management is a key performance indicator that a growing number of investors prioritize.”

They also addressed the allegations Starbucks took part in illegal activity to try and prevent the Workers from voting in a Union. “As Starbucks partners in Buffalo seek to form Unions, we are concerned about claims that have surfaced in public reporting that appear inconsistent with international standards.  First, rather than accept the three Unions’ request to be voluntarily recognized, it appears that the Company attempted to use the National Labor Relations Board (NLRB) process to seek a single election for all stores in the region.  This tactic suggests that the Company is trying to use the NLRB process, not in a neutral or good faith manner to have a free and fair election, but rather to weaken the Unions as much as possible.”

Furthermore, under NLRB guidance, Union Election Campaigns should be allowed to proceed in “laboratory conditions,” but Starbucks has reportedly taken a number of steps to delay and frustrate efforts.  The company appears to have indirectly intimidated employees through closing two of the Buffalo locations affiliated with the organizing effort, sending a top corporate executive, senior company officials, and managers under the premise of additional training, and introducing large numbers of partners to the stores after the announcement of Union filings.  This is in addition to reporting about the Company conducting captive audience meetings and instructing employees to consult the “Partner Hub” on-line, in which Starbucks employees have been required to hear and read Anti-Union rhetoric, including a November 6th voluntary meeting with former CEO Howard Schultz.  Although Starbucks asserts that these actions are standard procedure, the sudden and numerous changes suggest that the company is trying to circumvent union activity to the fullest extent possible.”

The letter is especially important as there are at least three more Starbucks locations voting on whether or not to join Workers United - which organized the Buffalo workers.

The employees at the Union locations will also need to negotiate their first Collective Bargaining Agreement and Starbucks is likely to stall on negotiations with the hope that the Pro-Union Members will leave and be replaced by employees who will decertify the Union.

However, if the company is feeling pressure from investors, they might be more willing to play nice and work out a contract.

To Directly Access This Labor News Story, Go To: https://ucommblog.com/section/corporate-greed/investors-starbucks-work-union