Thereâs A âKey Roleâ For Union Workers In $9.5B JFK Airport Rebuild 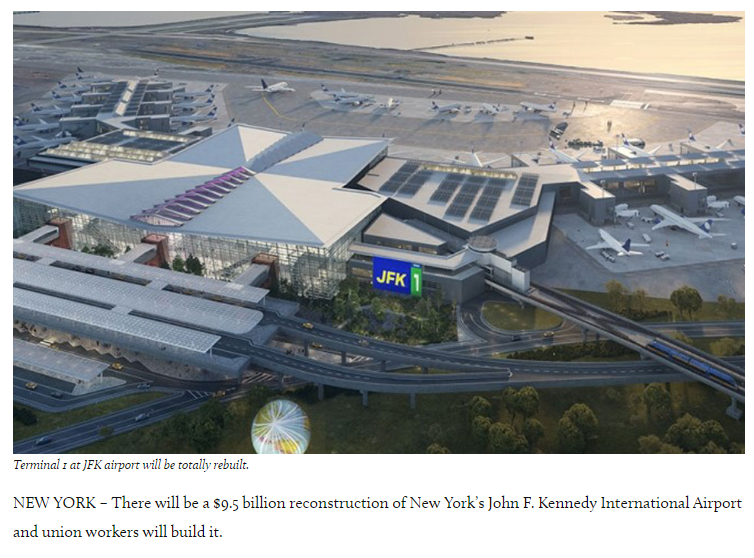 (NEW YORK CITY) – There will be a $9.5 billion reconstruction of New York’s John F. Kennedy (JFK) International Airport and Union Workers will build it.

The Board of the Port Authority of New York and New Jersey, which runs the airport, approved the New Terminal One construction project last week, after Governor Kathy Hochul and other officials unveiled it three days before.

The agreement the board Okayed calls for 6,000 Unionized Construction Workers to start the project in mid-2022.

Its first phase will open 23 new airport gates in 2026, leading to a larger, lighter and airier terminal, with more construction to follow.

When complete, New Terminal One will replace the airport’s “undersized and outdated Terminal 1,” the aging and obsolete 59-year-old Terminal 2, and the site of the former Terminal 3, which was demolished in 2013,” a Port Authority fact sheet says.

“This will be the largest public-private partnership in the world,” says Union Labor Insurance Company (ULLICO), the builder, in a statement.

Any ULLICO project must employ Union Workers and Union Workers will rebuild the airport under a Project Labor Agreement (PLA), which guarantees Union-scale wages and benefits.

ULLICO invests money it receives from Member Unions to finance projects - from housing to shopping centers to synagogues - whose construction employs Unionists and whose returns benefit Union finances.

And when construction is complete on New Terminal One, stores inside will have to ensure Unionists can be hired, because the PLA includes a company neutrality clause for those retailers.

ULLICO funds dozens of projects yearly, but this one is some sort of record and ULLICO has been working on it for three years.

ULLICO will hold a 19% share of the financing, using “a few hundred million dollars,” from its reserves and the rest from borrowing.

The Carlyle Group will put up 51% and Chicago-based Loop Capital, headed by former NBA great Earvin “Magic” Johnson, will provide 30%.

The JFK project also marks a milestone for ULLICO, which has come a long way from its establishment in the late 1920s.

Unions set it up then because commercial insurers wouldn’t touch Unionists with a 10-foot-pole.

“Ten years ago, we didn’t even have a fund” to help finance such large projects, Smith said. “Now we do.”

The JFK project, he adds, “shows the power of (Union) Members’ dollars” to generate good jobs for Unionists “with Union health and welfare benefits, too” and enhance their communities too.

PLAs not only set Union-scale wages and benefits, but specific work rules and grievance procedures, along with construction deadlines.

The exact Union-by-Union share of JFK work will be determined.

To Continue Reading This Labor News Report, Go To: https://peoplesworld.org/article/key-role-for-union-workers-in-9-5b-jfk-airport-rebuild/?eType=EmailBlastContent&eId=3dede57a-1f20-485f-9c9d-242a78af480b