âCapping Off A Year Of Labor Action At Amazon,â Workers Stage A âPre-Christmas Walkoutâ At Two Chicago-Area Delivery Facilities Over Pay & Working Conditions 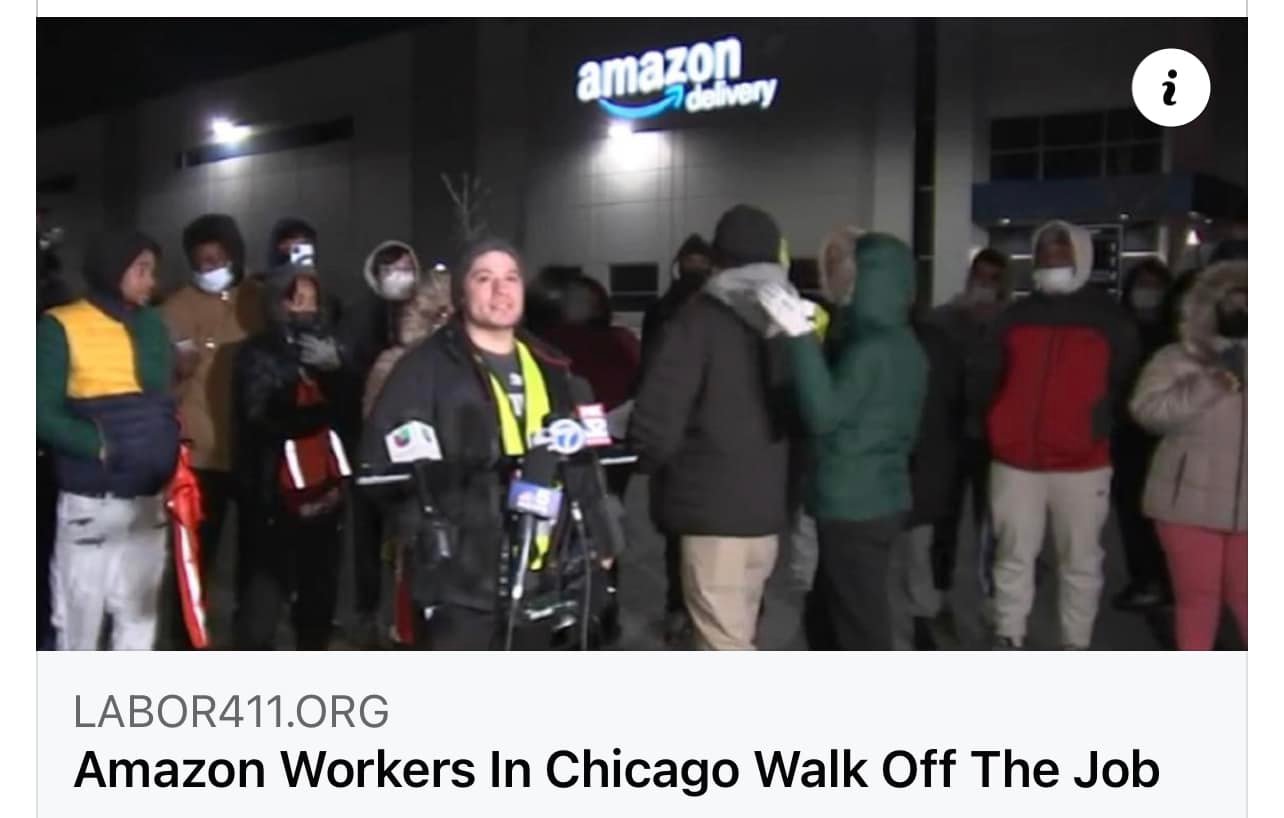 The work stoppages took place in west suburban Cicero and at the Gage Park facility on Chicago’s Southwest Side, according to Amazonians United Chicagoland, an organization representing local Amazon Warehouse Workers.

Ted Miin, a Member of the Labor Organization who’s worked for Amazon for nearly three years, said about 25 workers on the overnight shift at the Gage Park station left their posts early and gathered for a brief parking lot rally Wednesday morning (December 22nd).

Delivery stations are the last-mile stop in the Amazon shipping process, where packages from the fulfillment centers are sorted and loaded into vans for delivery to the customers.

More than half of the workers at the Gage Park station walked out with hours remaining on their shift and boxes piling up for delivery during the busy holiday shipping season, Miin said.

Starting pay for a warehouse “sortation associate” at the Gage Park station is $15.30 an hour - nearly $3 an hour below what comparable Workers make at other Amazon Delivery Stations in Chicago, Miin said.

The Workers are looking for a $3 an hour raise and a meaningful response from Amazon management addressing their concerns, he said.

Amazon said the starting pay at the two stations where the walkouts took place is actually $15.80 per hour, but the company did not disclose the pay rates at other Chicago-area stations.

In addition to better pay, the Delivery Station Workers say they are “forced to move too fast,” straining their bodies and walking over packages.

They are demanding “fair pay” for the heavy work they do regularly during 10-hour overnight shifts throughout the Coronavirus Pandemic, according to Amazonians United Chicagoland.

In April, Amazon quashed efforts by workers at an Alabama warehouse to form the first Union in the on-line retail giant’s history, waging a campaign that resulted in a lopsided defeat for the Unionization vote.

Amazon has more than 36,000 Full- and Part-Time Employees in Illinois at 20 fulfillment centers, 20 delivery stations and 28 Whole Foods grocery stores, among other locations, according to the company’s website.

The Wednesday walkouts come at a crucial time for last-minute shoppers - just three days before Christmas.

“We wanted to cause some disruption,” Miin said. “There’s definitely going to be some delays there.  There’s no way they’re moving all the packages that were supposed to go out today.”

To Continue Reading This Labor News Story, Go To: www.chicagotribune.com/business/ct-biz-amazon-delivery-walkout-chicago-20211222-nghmf7fqove2xeziam5m5todyq-story.html

And For More, Go To: https://inthesetimes.com/article/labor-amazon-warehouse-union-walkout-chicago-illinois-2021?fbclid=IwAR3ECx0RXevNYI6nLaJidlKzTc4J_3JpnQMdvg2-wCyqYEBLsfILrsqpP4Q