How Labor Can Stop âThe Privatization Of Everythingâ 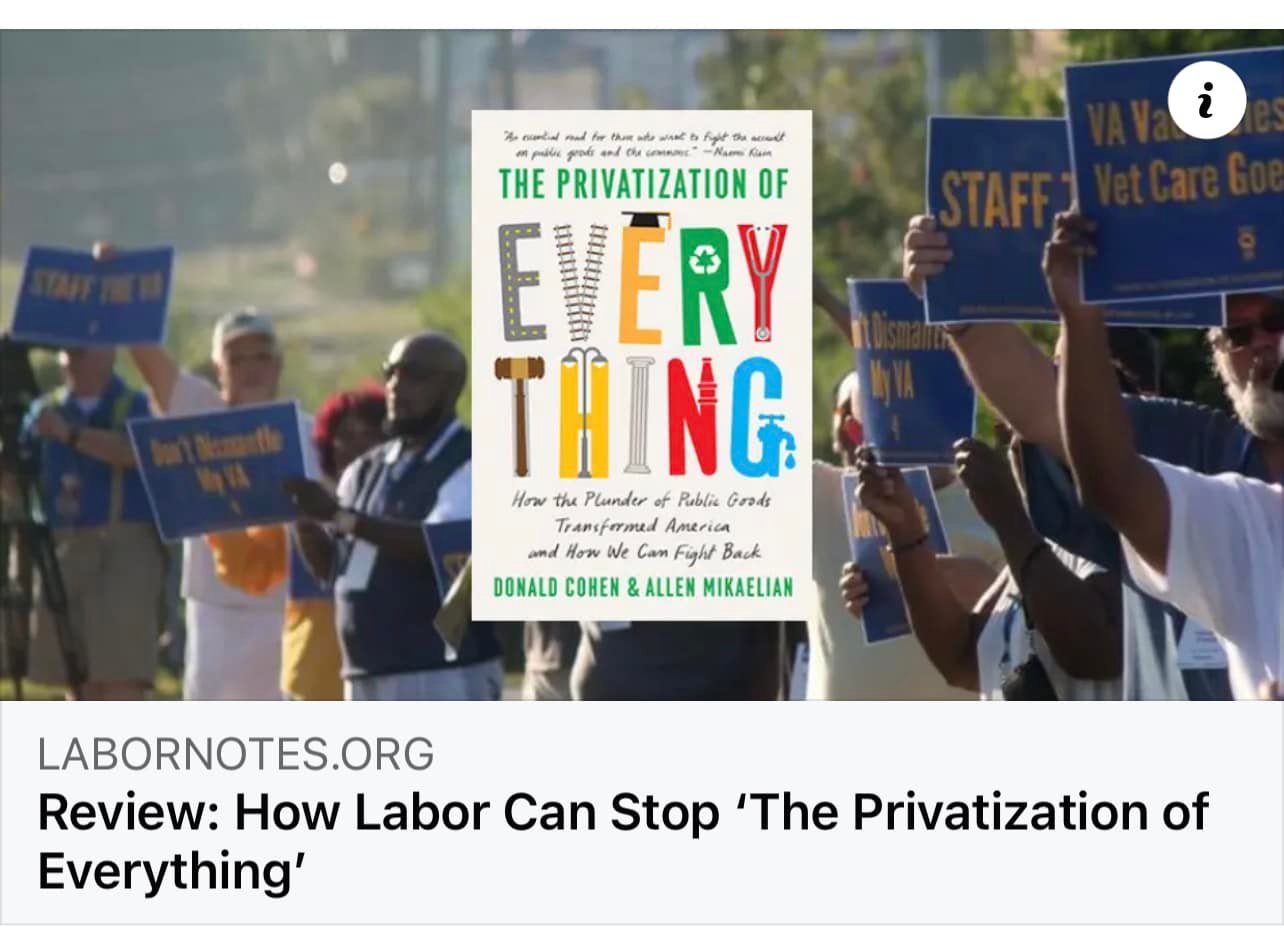 Several years ago, Don Cohen, a former Central Labor Council Staffer from San Diego, appeared on a panel discussing the privatization threats faced by Union Members across the country. He and other speakers were addressing a conference of State, County and Municipal Workers represented by the Communications Workers (CWA).

When Cohen described propaganda campaigns that proponents of privatization conduct to pave the way for outsourcing local government or state university jobs, audience members immediately recognized that kind of employer behavior and its adverse impact on them.

However, when another speaker - a campaigner against privatization of services for Veterans - did some quick polling on what CWA Activists had heard or read about the Department of Veterans Affairs (VA), their attitude toward that Federal Agency was largely negative.

With no VA Union Members present, and only a few Veterans or VA patients in the crowd to present an alternative view, the initial consensus of the group was that public provision of Veterans’ health care was inferior to Private Sector treatment - a perspective shaped by corporate media coverage and an ongoing Conservative push for the VA’s partial privatization.

But before the end of the session, participants had a far better understanding of the inter-relatedness of political attacks on public services and jobs, at all levels of government, and the need for greater Labor-Community Solidarity to fend them off.

As Cohen and his Co-Author Allen Mikaelian make clear in The Privatization of Everything: How The Plunder of Public Goods Transformed America and How We Can Fight Back (New Press), how any private sector incursion into the Public Sector is not just somebody else’s problem - it’s an injury to all.

In their new book, Cohen and Mikaelian describe and debunk the vast array of privatization schemes that now litter the landscape, from private prisons and charter schools to for-profit water treatment and trash collection: “Corporations entrusted with public goods have been given the power to lock people up, force them into a parallel justice system, deny them life-saving treatments, place vital information behind paywalls, divert money from poverty programs to wealthy investors, tie the hands of governments, and undermine our constitutional rights.”

There are now 2.6 times as many Federal Contract Employees as there are direct employees of Federal Agencies.

As private companies have grabbed a bigger share of the $7 trillion spent every year on public services, the impact of privatization on pay, benefits and income inequality has become more pronounced.

In their many case studies, the authors show how contracting out has been a win-win for the rich and powerful, but rarely for anyone else.

The cost savings promised by privatizers have been achieved at the expense of living wage jobs with decent benefits in the Public Sector.

White-Collar Professionals like teachers and Librarians are targets as well, when privatization leaves them without Union protection or job security - but covered by charter school employment contracts with draconian “non-compete” clauses that limits job mobility.

The authors provide a useful history of privatization as a bipartisan political strategy, tracing its roots to the theories of Free-Market Economist Milton Friedman and attempts to implement Friedman’s ideas during the two-term Presidency of Ronald Reagan.

To Continue To Read This Labor News Report, Go To: https://labornotes.org/blogs/2021/12/review-how-labor-can-stop-privatization-everything