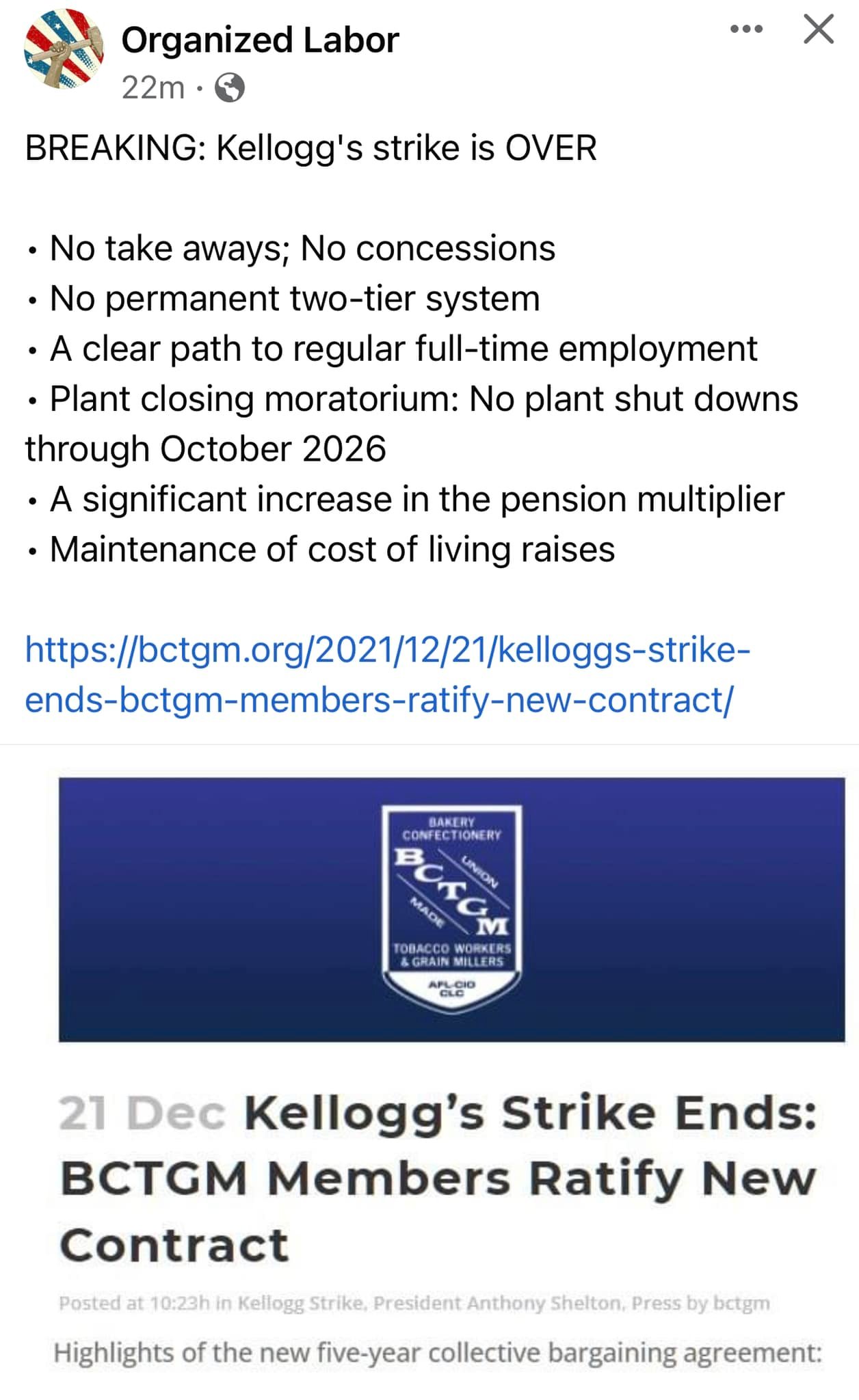 Approval of the five-year contract, which covers 1,400 Workers, ends the BCTGM’s Strike against Kellogg’s, which began on October 5th (2021).

“Our striking Members at Kellogg’s Cereal Production Facilities courageously stood their ground and sacrificed so much in order to achieve a fair contract.  This agreement makes gains and does not include any concessions,” BCTGM International President Anthony Shelton said.

Contract highlights include: No takeaways; No concessions; No permanent Two-Tier Wage System; A clear path to regular full-time employment; A plant closing moratorium: No plant shutdowns through October 2026; A significant increase in the pension multiplier; and Maintenance of Cost-of-Living raises.

“Our entire Union commends and thanks Kellogg’s Members.  From picket line to picket line, Kellogg’s Union Members stood strong and undeterred in this fight, inspiring generations of Workers across the globe, who were energized by their tremendous show of bravery as they stood up to fight and never once backed down,” Shelton said.

“The BCTGM is grateful to National AFL-CIO President Liz Shuler for mobilizing the AFL-CIO and its affiliates in support of our striking Kellogg’s Members.  Once again, President Shuler has provided highly effective leadership in support of the BCTGM and our members. And The BCTGM is grateful, as well, for the outpouring of fraternal support we received from across the Labor Movement for our striking Members at Kellogg’s. Solidarity was critical to this great Workers’ victory,” he said. 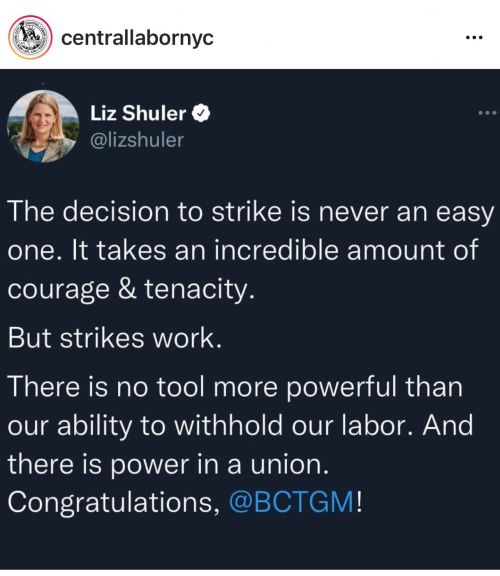 Kellogg said the new contract provides immediate, across-the-board wage increases and enhanced benefits for all, as well as providing for an accelerated, defined path to top-tier wages, a major sticking point for Workers, and benefits for transitional Employees.

"We are pleased that we have reached an agreement that brings our Cereal Employees back to work," CEO Steve Cahillane said in a statement.

Kellogg Workers will return to work on Monday (December 27th), Kellogg said, after the holiday.

Earlier this month, an overwhelming majority of Kellogg’s Workers voted down a five-year offer that would have provided 3% raises and Cost-of-Living adjustments in the later years of the deal-  to most but not all of the Workers.

That offer also would have preserved employees' current health benefits.

The Workers held out for more partly because they believed the ongoing worker shortages across the country gave them leverage in the negotiations.

They also said they deserved raises after keeping the plants running throughout the Coronavirus Pandemic.

For More On This Labor News Story, Go To: www.cbsnews.com/news/kellogg-strike-ends-workers-ratify-labor-agreement/?fbclid=IwAR1zf0w0XCf3i5egex4EC8hLAO2lNDcpeBg1FL6LWVhFpd0fo4Y3RaG-mk0