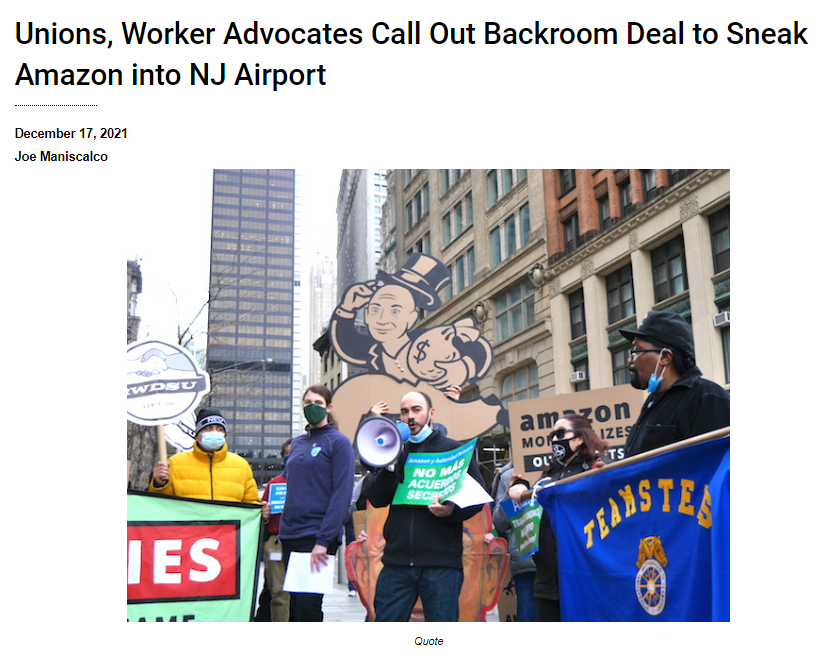 (NEW YORK CITY) - Teamsters Local 863 Member George Boada, 45, grew up in Elizabeth, New Jersey and still lives “about seven traffic lights” away from Newark Liberty International Airport with his wife and their 14-year-old son.  Boada’s worked at the same Jersey-based Supermarket Cooperative for more than 25 years - but now he fears Amazon and it’s ever growing monopoly is about to bring it all crashing down.

“As companies fold under Amazon’s weight, it’s either you join them, or you go by the wayside. That’s what we’re facing.  We’re facing a juggernaut - they’re not stopping,” Boada told LaborPress outside the Port Authority of New York & New Jersey’s 4 World Trade Center offices late last week.

The Teamsters, along with the Retail, Wholesale and Department Store Union (RDWSU) and other Worker Advocacy Groups belonging to the coalition calling on New York State Governor Kathy Hochul to back new Anti-Trust Legislation pending in the State Legislature, rallied outside the Amazon Go outlet at the corner of Church and Cortland streets in Manhattan before marching over to the Port Authority offices where the agency was busy behind closed doors planning a new regional hub for Amazon at Newark Airport.

“What Amazon is doing in New Jersey right now is exactly what (Amazon) tried to do in New York, in Long Island City,” ALIGN Executive Director Maritza Silva-Farrell told a group of roughly 50 protesters. “They cut secret deals - that’s their MO (Modus Operandi).  That’s what they do.  They work with government behind the scenes.  They try to cut deals without including the community.”

The Billionaire Club - including Amazon founder Jeff Bezos, Tesla’s Elon Musk and others - added some $4 trillion to their coffers between March 2020 and March 2021.

In 2019, Amazon scrapped plans to build a second headquarters in Long Island City - dubbed “Amazon HQ2” - after refusing to back off on its virulent Anti-Unionism.

Since then, however, the E-Commerce Giant has opened more than 15 new facilities around the New York region.

Boada says he’s been lucky - Local 863 has consistently been able to settle equitable contracts with the Wakefern Food Corporporation in New Jersey, but he says that’s becoming tougher to do: “The last two contracts we’ve received a little pushback with them saying, ‘Look, we need to compete with what’s out there.’  Thank God, we’ve been able to get the bargaining agreement signed without having to strike or anything of that nature.  But it’s getting harder and harder. And it’s all due to Amazon and these large corporations throwing their weight around and not giving people a living wage.”

The Amazon Labor Union continues its organizing efforts at the JFK 8 Amazon warehouse on Staten Island, and the RWDSU is looking forward to another Union Election at the Amazon warehouse in Bessemer, Alabama after the National Labor Relations Board (NLRB) found Bezos’ company cheated during the first one.

The Teamsters, meanwhile, has launched its own campaign to organize Amazon Workers around the country.

To Read This Labor News Report In Its Entirety, Go To: www.laborpress.org/unions-worker-advocates-call-out-backroom-deal-to-sneak-amazon-into-nj-airport/