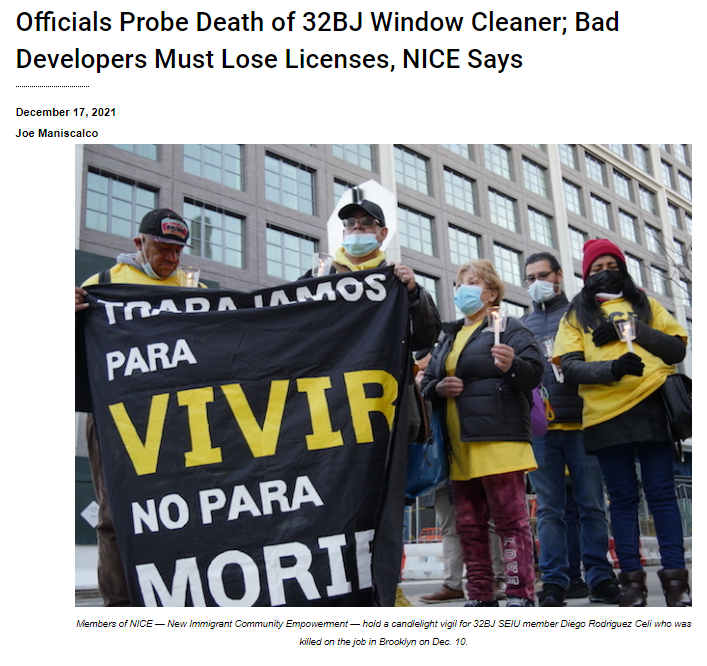 Rodriguez Celi, along with an uncle, were among a total of four 32BJ Window Cleaners who were working at the 85 Jay Street building in Brooklyn where the fatal incident took place.

“Our thoughts are with Diego’s family during this difficult time,” 32BJ Executive Vice-President Shirley Aldebol told LaborPress. “We are waiting for OSHA (U.S. Occupational Safety and Health Administration) to conclude its investigation into this tragic incident before we determine any next steps.  We will continue to advocate for increased safety and training standards at work sites for Window Cleaners and other Workers and will continue to take all steps necessary to protect our Members on the job.”

The New York City Department of Buildings investigated the site following the early morning incident in which Rodriguez Celi reportedly fell from the 12th floor of the 21-story condo that is being constructed at the intersection of York and Jay streets.

According to investigators they had uncovered violations not related to the deadly fall itself, but that did involve failures to safeguard the construction site.

A Stop Work Order was subsequently issued for the worksite.

Diego Rodriguez Celi was reportedly just 34 years-old when he died on the job.

The massive “Open Shop” Development at 85 Jay Street has been a source of Union consternation going back to at least 2019, when Members of New York City’s Unionized Building Trades began protesting against the CIM Group and their decision to employ general contractors and subcontractors notorious for exploiting Non-Union labor.

Four days following Rodriguez Celi’s death, members of NICE - the New Immigrant Community Empowerment - held a solemn candlelight vigil for him just across the street from the spot where his life ended on the job.

Estefania Galvis, Workers Developer Director at NICE, told LaborPress that multi-billion-dollar developers are not being held accountable for the deaths they are causing throughout New York City: “These are not accidents.  All these deaths are preventable.  Fines do not work.  We need the state and the city to take steps towards taking away licenses from people that have deaths on their worksites.  The majority of times, those deaths are Immigrant Workers.  As we’ve seen on the national and local levels - Immigrants seem to be indispensable and disposable at the same time.”

Each year, the New York Committee for Occupational Safety & Health (NYCOSH) issued a survey of Construction Worker injuries and fatalities.

Rodriguez Celi, according to his social media account, was originally from Macara, a city in Ecuador’s Loja Provence.

“Non-Union job sites remained dangerous for Workers and construction remained especially dangerous for Latinos,” the report’s authors wrote. “This finding is consistent with prior years and is particularly relevant due to the relationship between unsafe jobs and immigration status.”

To Continue Reading This Labor News Report, Go To: www.laborpress.org/officials-probe-death-of-32bj-window-cleaner-bad-developers-must-lose-licenses-nice-says/