The Massachusetts Nurses Association Reaches Tentative Agreement On A New Contract For Striking Nurses At Saint Vincent Hospital - âIf Ratified, It Would Bring To An End A 285-Day Strike Over Safe Staffing Levelsâ 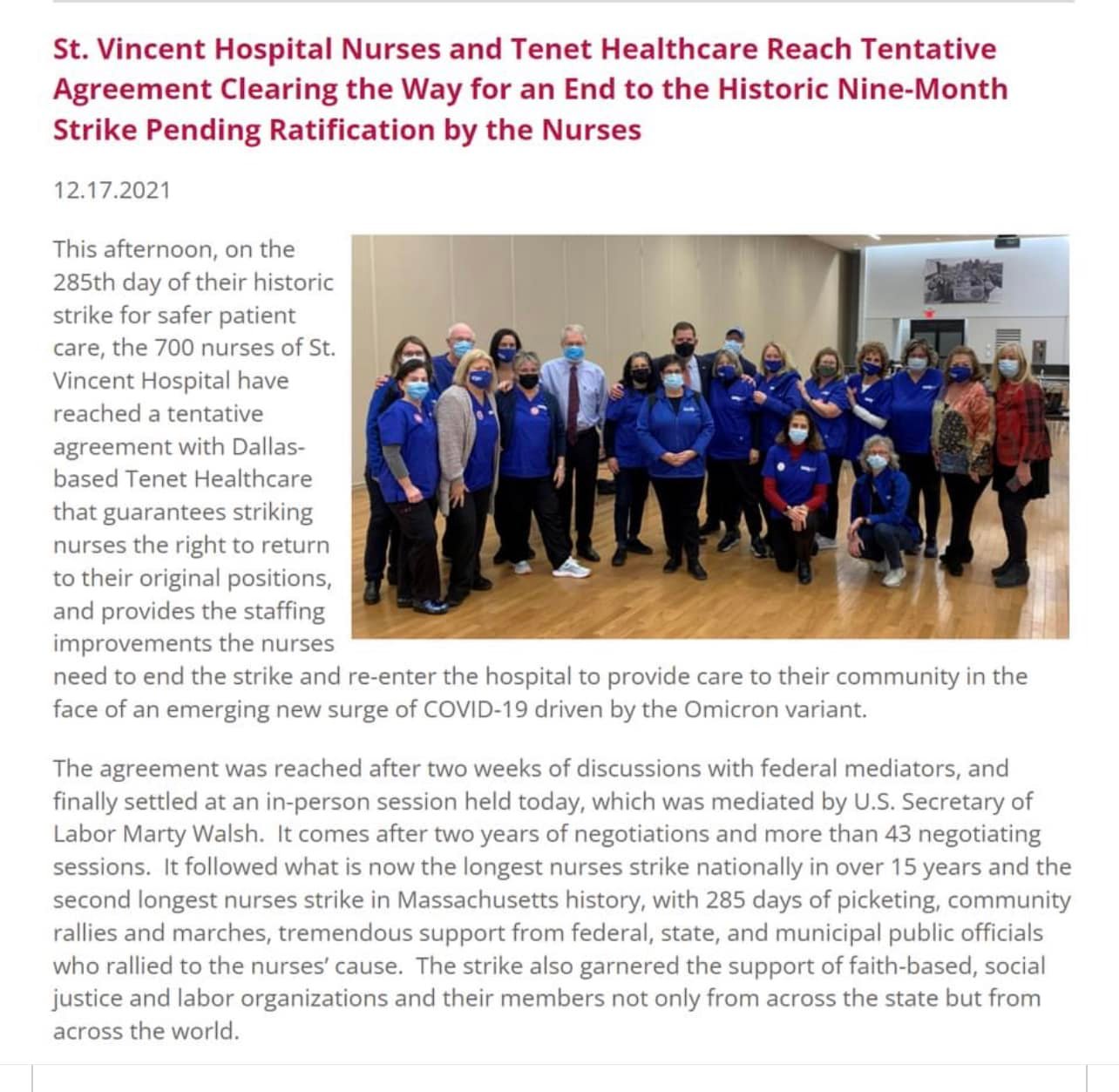 Specific details of the agreement are being withheld until they can be shared with the Union’s Rank-and-File Members and a ratification vote is held, which Nurses hope will happen as soon as possible, the MNA said.

Once the agreement is ratified, the hospital will restore striking Nurses to their previous positions - while retaining all permanent replacement Nurses in their current positions, according to the statement.

Maintaining positions held before the Strike was a major sticking point for the MNA.

Nurses didn’t get everything they wanted, the MNA said, but secured that “back to work” provision and staffing improvements.

The Strike began in March as Nurses called for safer staffing levels.

In August, Saint Vincent started to scale back both in-patient and out-patient capacity in several areas because of the Strike.

The agreement was reached after two weeks of discussions with Federal Mediators.

It was settled at an in-person session held Friday, mediated by U.S. Secretary of Labor Marty Walsh, the former Boston Mayor.

It comes after two years of negotiations and more than 43 negotiating sessions, according to a statement from the MNA.

Marlena Pellegrino, the Co-Chair of the St. Vincent Hospital Nurses’ Local Bargaining Unit with the MNA, said: “We are so grateful for and humbled by the efforts of Secretary Walsh and so pleased to have finally reached an agreement that we believe provides us with what we need to better care for our patients that we will now take to our Members for a vote to ratify and thus call an end to our historic Strike.  This agreement, and the improvements it includes was hard fought, and represents a true victory, not only for the Nurses, but more importantly, for our patients and our community, who will have access to better nursing care, which was why our Members walked that Strike line for the last nine months through four seasons.”

Dominique Muldoon, a Nurse at the hospital and Co-Chair of the Bargaining Unit, said: “With this agreement we can go back into that building with great pride not just in what we got in writing in the agreement, but for what we have built together as Nurses who know they did everything they could for their patients and their community.  Once this is ratified by the Members, we are now committed to getting back into that building as soon as possible to provide the care our patients deserve.”

To Read This Labor News Story In Its Entirety, Go To: www.masslive.com/worcester/2021/12/saint-vincent-hospital-and-massachusetts-nurses-association-reach-tentative-agreement-that-allows-striking-nurses-to-resume-previous-positions.html

I am amazed Union Leadership was able to keep its Members dedicated to do the right thing and stay strong against an out-of-town profit ( not care), driven employer. Let's see how they can function working along side of the permanent replacement Workers. Perhaps the scabs will convert to our side. Posted by Bill Daniels on December 27, 2021 at 9:49 am