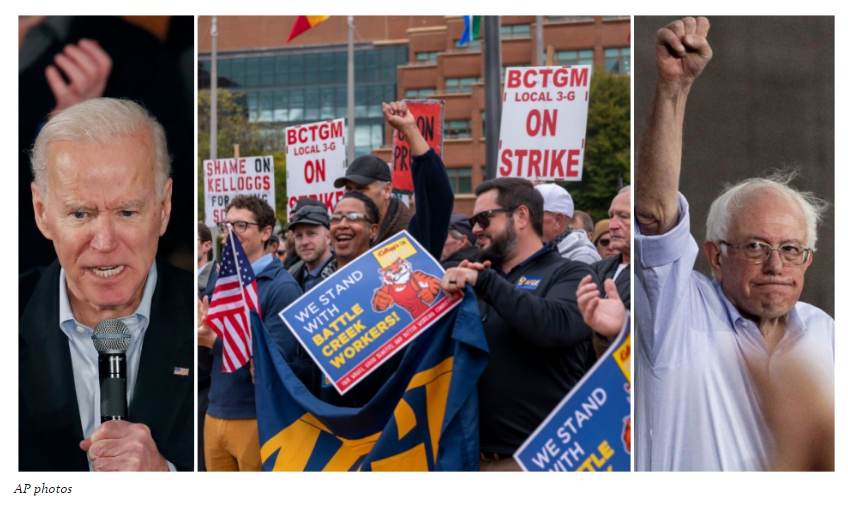 (WASHINGTON, D.C.) - President Joe Biden is publicly and bluntly backing the 1,400 Kellogg’s Workers whom the Cereal Giant forced to Strike weeks ago - and he opposes the firm’s plan to permanently replace them.

“Every Employee has the right to collectively bargain.  Full stop,” Biden’s first tweet on the months-old conflict declared. “I am deeply troubled by reports of Kellogg’s plans to permanently replace striking workers.  Permanently replacing striking Workers is an existential attack on the Union and its Members’ jobs and livelihoods.  I strongly support legislation that would ban that practice.”

Biden’s tweeted statement came as the forced Strike continued, since the Workers - who are Members of the Bakery, Confectionery, and Tobacco Workers and Grain Millers (BCTGM), “overwhelmingly rejected” the profitable firm’s proposed contract.

While BCTGM gave no official reason for that turndown, news reports indicated the company refused to budge on Workers’ demands it eliminate its Two-Tier Wage and Pension System or its mandated extensive overtime, including weekends and holidays.

A ban on company replacement of economic Strikers - replacement the U.S. Supreme Court legalized in the late 1930s - is also part of the Protect the Right to Organize (PRO) Act, Organized Labor’s #1 legislative priority.

Biden’s stand with the Kellogg’s workers is also consistent with his track record.

That includes open support for the Retail, Wholesale, and Department Store Union’s (RWDSU) Organizing Drive at the Amazon warehouse in Bessemer, Alabama and frequent and public insistence that new “Green” and infrastructure jobs must be Union jobs.

The Union asked Obama, a Chicagoan and then Biden’s boss, to speak out.

“The BCTGM is profoundly grateful to the President of the United States for his support for Working People and their right to engage in meaningful collective bargaining,” Shelton tweeted in reply to Biden’s backing now.

“We wholeheartedly agree with President Biden that Kellogg’s threats to permanently replace striking workers ‘is an existential attack on the Union’ and is a direct attack on workplace Democracy and Worker Rights,” a second Shelton tweet read. “The @POTUS condemnation of @KelloggsUS actions reinforces the position our #KelloggStrike Members have taken; they will not be bullied at the negotiating table and are ready to bargain a fair and just contract.”

“President Biden is exactly right.  I stand in strong solidarity with the Workers who are taking on Kellogg’s greed,” Sanders said.

To Directly Access This Labor News Story, Go To: www.peoplesworld.org/article/biden-backs-kelloggs-workers-sanders-takes-fight-to-cereal-giants-doorstep/