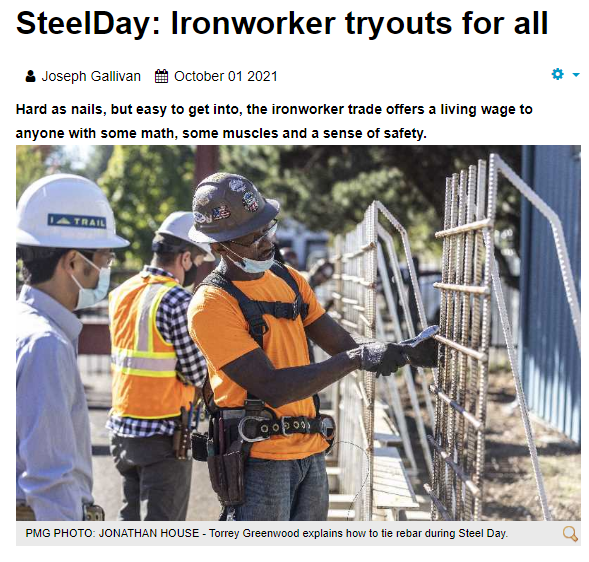 (PORTLAND, OREGON) - Hard as nails, but easy to get into, the Ironworker Trade offers a living wage to anyone with some math, some muscles and a sense of safety.

Recently, a collection of 20-somethings met at the Iron Workers Local 29 Training Center near the Portland Airport to "Experience a Day in the Life of an Ironworker," as the four-hour session was billed.

But this event was not the usual collection of disoriented teens wondering what they might do with their lives, kicking the tires of various jobs.

Instead, it mainly was White-Collar Engineers looking to get a feel for steel as a construction material.

They came from firms such as Catena Consulting Engineers and Mackenzie, as well as PacifiCorp and even Amazon.

For a bit of fun (and a dose of humility), they tried climbing "the pole."

The pole is a steel I-beam, H- or I- shaped in cross-section, which stands 16 feet tall on the Union's property.

As the lead, Vernon Brose, explained, the only method that works is gripping the flat side nearest to you with your bare fingers and jamming your feet against the plate farthest away.

Brose and Apprentice K.J. Selmo zipped up the beam, but Steven Ogilvie, a salesman with TFe Connection, had to stop after about five feet, beaten by gravity.

"That was difficult, to say the least," said Ogilvie as he recovered. "I'm a guy who likes to bike and hike and lift weights, but, wow, it's just such a different skill to climb a beam like that.  It's exhausting."

The Ironworker Apprenticeship is four years long with 160 hours of class training each year and is affiliated with Mt. Hood Community College - so this was more like a day to sample the fun stuff.

Outside, Welding Instructors helped people to run an oxygen-acetylene torch and a plasma torch.

The oxyacetylene rig was set up on a steel grid that looked like a barbecue grill.

Turning up the acetylene made the torch's flame hotter for welding motel metal together.

Turning up the oxygen made the flame cut more quickly.

"It's making it rust," said the Instructor, putting it simply.

Nearby were sheets of rusty rebar that students were tying together with wire from a spool on their hip.

Compared to the rebar, the wire looked like bread bag ties, but it gets the job done of holding the rebar in shape while concrete is poured all over it.

Inside the Union's cinder block and steel buildings, one whole area is devoted to arc welding, the preferred modern method for accurate welds when there is a reliable electricity supply.

Guests lined up at the booths while an instructor showed them the basics.

To Continue Reading This Apprenticeship And Training Labor News Story, Go To: https://pamplinmedia.com/but/239-news/523644-417904-steelday-ironworker-tryouts-for-all