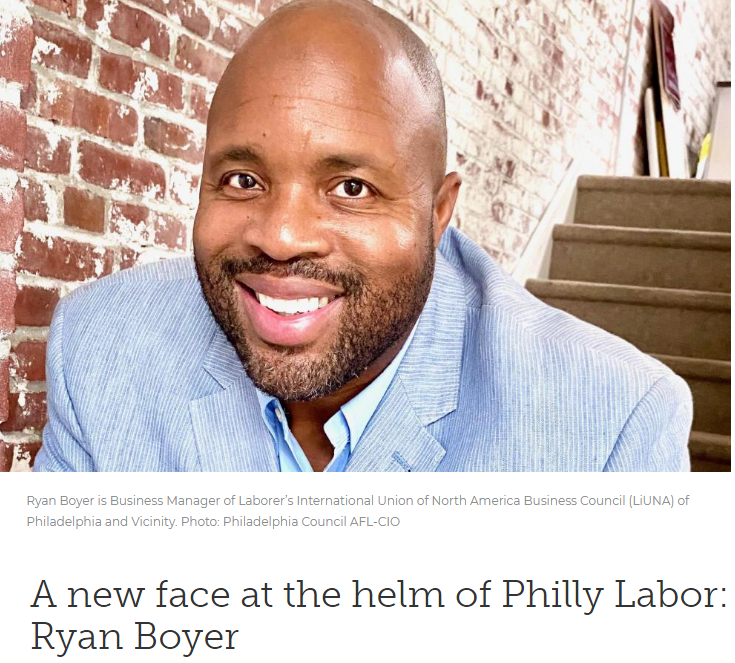 Boyer is the top official of the Laborers District Council, which represents 6,200 Members across four Locals that are the only majority-Black Building Trade Unions in the region.

The Building Trades Council has long been criticized for its lack of racial diversity and improving this is one of Boyer’s main objectives in his new role.

“One of my leading priorities will be to build on the progress we have made towards ensuring that our Unions reflect the diversity of our region,” he said in a statement.

This change in leadership was authorized by the Council’s Executive Board during a three-hour meeting at the Sprinkler Fitters Union Hall.

It was decided Boyer will finish the remaining three years of Dougherty’s term.

With Boyer’s promotion, some political observers see a chance to boost racial diversity in the predominately White Building Trade Unions.

City leaders have long been attempting to diversify their ranks and Dougherty often disputed with lawmakers over efforts to increase minority participation in city-contracted Union work.

In May 2018, Mayor Jim Kenney’s $500 million public works initiative was threatened by a dispute over a commitment to diversify the city’s Building Trades Unions.

Kenney and Dougherty clashed with City Council over the terms of an agreement to boost minority participation among the Construction Unions.

Dougherty said he wouldn’t negotiate any further with the Council after having struck a deal with the mayor.

"That's the only deal they're getting from me.  These agreements are perfect for trying to break the lack of inclusion in the trades,” Dougherty said in an interview with The Philadelphia Inquirer.

In response, Boyer told PlanPhilly the situation was beyond frustrating, but that the Laborers’ District Council will not give up on their dedication to the community and to the mayor.

“We want to be - and we’re going to be - a more diverse Building Trades.  We want to fix the parks and rec centers and we want to acknowledge that historically, the Building Trades have not been as hospitable to People of Color,” Boyer said.

To Continue Reading This Labor News Report, Go To: https://aldianews.com/articles/politics/new-face-helm-philly-labor-ryan-boyer/68098