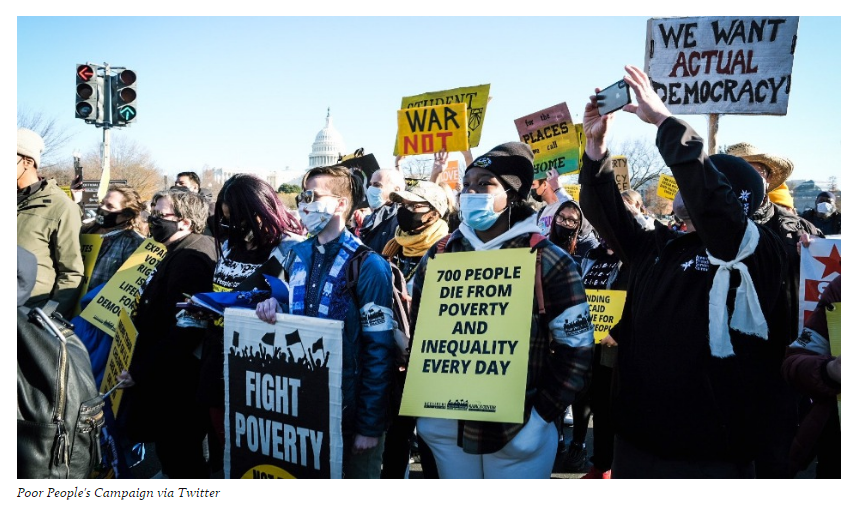 (WASHINGTON, D.C.) - One by one, advocating ending income inequality, strengthening and restoring voting rights, cutting military spending, extending the Child Care Tax Credit, raising the Minimum Wage, and more, a parade of people hurting from exploitation by corporations, the economic elite, and their political allies, took a hand-held microphone in Washington, D.C. earlier this week to campaign for their combined causes.

But not just that, they added, in the culmination of a car caravan from Martinsburg, West Virginia, where they rallied early the same morning (December 13th) in front of one of Manchin’s state offices.

The car caravan was the latest in a series of marches in Manchin’s domain, on the U.S. Capitol, and sometimes both.

All stress the same themes: Demanding the Nation eradicate poverty, income and societal inequality, fight rampant racism and White Nationalism, cut “the war economy” in half while raising the minimum wage, guaranteeing the right to Unionize, and especially the right to vote.

The marchers want and said the country can afford to eliminate income inequality.

They want, and said, the U.S. must live up to its commitments enshrined in the Constitution of equal rights, especially voting rights.

And they want Biden to meet with them, not “negotiate in the backroom” with Manchin and Sinema, as Poor People’s Campaign Co-Chair - the Reverend William Barber II, told reporters afterward.

Then Biden must make eradicating poverty, racism and inequality and strengthening voting rights his cause.

Biden Staffers have met with the campaign’s members, but the President hasn’t.

The campaigners also declared the Nation sends more money, $75 billion, to one military contractor, Lockheed Martin, this year than the Build Back Better Bill’s entire 10-year cost for upgrading child care, including paying those Child Care Workers at least $15 hourly.

“Build Back Better is ($170 billion) a year,” said Veteran Tim Watt of Indianapolis.

And that contrast, Barber and the others said, is economically and morally wrong.

And they demanded, in Barber’s words, that Congress “Get it done in 2021!”

And they won’t go away, either, he added.

To Continue Reading This Labor News Report, Go To: www.peoplesworld.org/article/parade-of-hurting-people-prods-lawmakers-to-pass-build-back-better/