As The Buffalo Public Schools Superintendent âPushes For Raises Of As Much As 40% For Administrators & Non-Unionâ Employees, IUOE Local 17 Instead âTurns The Focus To The Schoolsâ âSuffering And Extremely Low Paid/Essentialâ Custodians

Local 17 Business Manager Gary Swain: âIâd Like To Draw Your Attention To A Complete Travesty Taking Place Right In Front Of Everyone. Theyâve Been Without A New Contract For (11) Years, Which Means No Increases In Pay For (11) Years.â 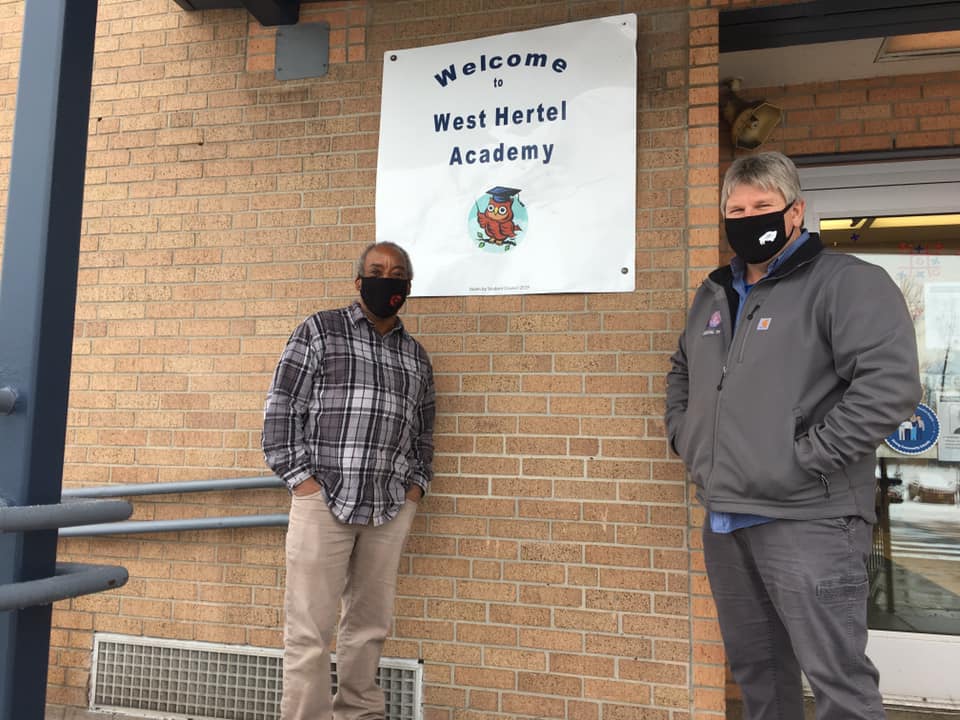 WNYLaborToday.com Editor’s Note: Pictured above, on the right, West Hertel Academy Custodian Bob Harrell, who has not had a raise in nearly 12 years and makes just $12.17 an hour, less than the present $12.50 New York State Minimum Wage.  Standing next to him is International Union of Operating Engineers (IUOE) Local 17 Business Manager Gary Swain.  Both were interviewed for a story WNYLaborToday.com published back in January (2021) on the plight of these Buffalo Public Schools Custodians who’ve been left behind and ignored by the School District when it comes to negotiating a new and fair contract.   (WNYLaborToday.com File Photo)

(BUFFALO, NEW YORK) – International Union of Operating Engineers (IUOE) Local 17 Business Manager Gary Swain – whose Buffalo Building Trades Member Union represents more than 200 Buffalo Public School Custodians, was more than angry when he opened The Buffalo News this week, only to see the School Board Superintendent publicly pushing for raises of as much as 40% for Administrators and its Non-Union Employees.

“On the doorstep of an (unbelievable) twelve years,” Swain penned in a Letter to the Editor for The News that took Superintendent Kriner Cash to task for failing to negotiate a fair agreement with his Unionized Custodians, who “have been without a new contract for (11) years, which means no increases in pay for eleven years, no increases in benefits for (11) years.”

“One could say that Superintendent Cash and the Buffalo School Board have padded their school budget over the past eleven years with ($2 million) worth of wages and benefits that should have been in the checks of the School Custodians and Building Engineers, the people keeping the schools safe!,” Swain wrote in his Letter to the Editor.

IUOE Local 17 represents the School Custodians and Building Engineers who are employed in 80 schools, which involves a contract with the Buffalo School Engineers Association (BSEA).

These Workers, who are under contract with the School Board for the upkeep of school buildings, were considered Essential during the Coronavirus Pandemic and have played a key role in keeping Buffalo’s Public Schools safe for its students over the course of time, putting their own health in jeopardy as they clean and sanitize the schools, its classrooms, desks and bathrooms.

These Unionized Buffalo Public School Custodians who’ve been working without a contract for more than a decade now and make what many could only describe as a disgusting $12.17 an hour - less than the present $12.50 New York State Minimum Wage.

WNYLaborToday.com first reported on their plight in January 2021 (Read: Could You Live Off Our Rate Of Pay?” - ‘Frustrated’ Buffalo Public School Custodians, Who Are Fighting COVID To Protect Schoolchildren, Have Been Without A Contract For 10 Years & Make A ‘Disgusting’ $12.17 An Hour, Less Than The NYS Minimum Wage at www.wnylabortoday.com/news/2021/01/26/buffalo-and-western-new-york-labor-news/could-you-live-off-our-rate-of-pay-frustrated-buffalo-public-school-custodians-who-are-fighting-covid-to-protect-schoolchildren-have-been-without-a-contract-for-10-years-make-a-disgusting-12.17-an-hour-less-than-the-nys-minimum-wage/).

“After reading (the) article in The News (https://buffalonews.com/news/local/education/cash-proposes-big-pay-increases-for-buffalo-public-schools-top-administrators/article_9d8cc970-5c65-11ec-96b2-1b055cffa729.html), I feel I need to respond,” said Swain, who also made a copy of his letter available to WNYLaborToday.com.

“I ask you to reject any proposal from the Superintendent until the glaring issue has been resolved.  I believe that kicking this can down the road any further will compromise any chance we have of making it right by the School Custodians.  They have suffered for far too long without raises.  Eleven years is enough and we are now on the doorstep of twelve years.  The price tag and Employee suffering continues to increase with each passing day, please take the time to read my letter and stop the madness.  The solution is in your hands.  Please settle the BSEA contract.  Thank you,” Swain said.

Here’s Swain’s Letter to the Editor to The Buffalo News in its entirety:

I would like to draw your attention to a complete travesty taking place right in front of everyone here in Buffalo.

What Superintendent Cash is not willing to talk about is the lack of raises for the Custodians that work in the Buffalo Public Schools - keeping them clean, warm, safe and disinfected throughout this pandemic.

In fact, the minimum wage has caught up with some and one could say Superintendent Cash and the Buffalo School Board have padded their school budget over the past 11 years with $2 million worth of wages and benefits that should have been in the checks of the School Custodians and Building Engineers - the people keeping the schools safe!!

The BSEA has also been without a new contract for 11 past years with the Buffalo School Board, and therein lies the problem.

The problem, whatever it is, whoever it is with, needs to be brought to the attention of the taxpayers of the City of Buffalo.

I have sent many e-mails to Superintendent Cash and the School Board Members, and their counsel, with responses back that ‘we don’t have a contract with you or your Union and therefor won’t talk to you about any of your issues.’

I am tired of their inactivity.

I am tired of our issues being swept under the rug.

But most of all, disappointed with the lack of respect that our School Employees are showed.

Where else in the country are Workers treated so unfairly?

Where else has so much been taken from the people we entrust with our children’s safety?

I cannot keep silent any longer.

I will not look the other way when there is so much at stake.

Someone must take a stand and the time for action is now.

Someone must ask the question, why?

Why we are not paying the workers (I mean the keepers of our children’s safety) a living wage, with real benefits and a new contract.

And after (this) article in The Buffalo News, it seems to be clear that there is money in their budget for raises.

How much is the question.

This question makes me wonder, is there $2 million in their budget left for the School Custodians or is Superintendent Cash spending that money for everyone else’s raises?

I will point out that he (Superintendent Cash) was quoted as saying that they have reached settlements in 10 out of 11 Union contracts.

Now you and everyone else knows who that last contract belongs too!

I can only hope that at Wednesday’s school board meeting someone will be asking questions, the kind of questions that Superintendent Cash will struggle to answer, the time is now for truth and raises for our Workers/Members.

The time is now for a real solution.

WNYLaborToday.com was included in the e-mail Swain also sent to School Board Members.

This morning, Lou Petrucci - Park District Representative/Board President, responded, saying: “Thank you Mr. Swain for reaching out to me and bringing your concerns to our attention.  Stay safe.”