Despite The Situation, âCommunity-Mindedâ USW/DuPont Workers To Call Public Attention To Companyâs Stance While Holding Their Annual Toy Drive - âAn Effort That Will Help A Number Of Area Families In Need This Holiday Seasonâ 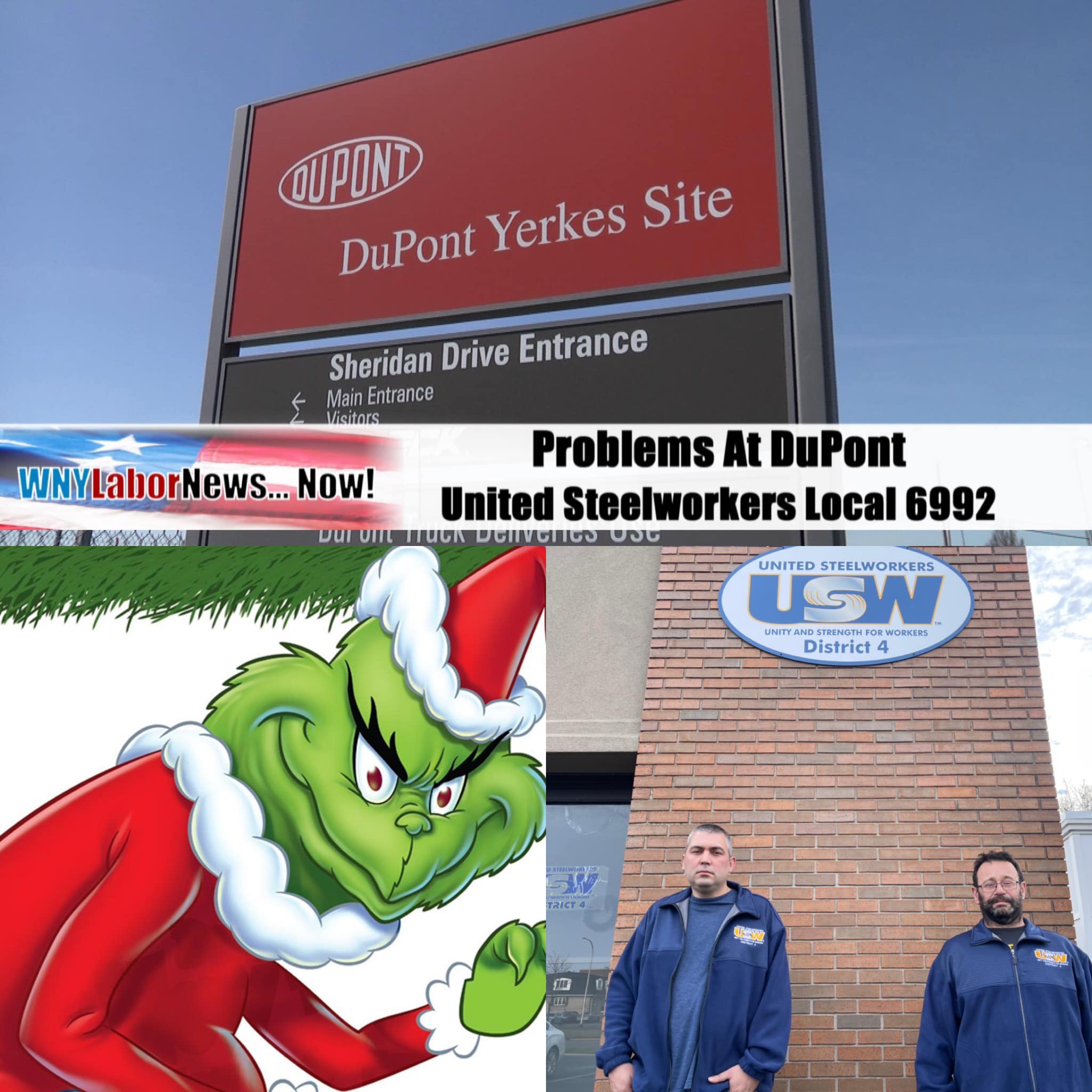 WNYLaborToday.com Editor’s Note: Pictured above, (on the left) Mike Werner, a Sergeant-of-Arms with United Steelworkers (USW) Local 6992 who’s worked at DuPont’s Tonawanda Plant for six years as a Process Specialist, stands next to Leo Sperduti, a Maintenance Mechanic at the DuPont Plant who also serves as Financial Secretary for USW Local 6992, outside USW District 4’s Union Offices.  The two met with WNYLaborToday.com to talk about management’s effort to get their Essential Workers to take a major pay cut in a new contract that is currently being negotiated.  Both Workers told Your On-Line Labor Newspaper the cut to annual salaries would negatively impact the plant’s USW-represented Workers by as much as $15,000.  (WNYLaborToday.com Photos)

(TONAWANDA, NEW YORK) – Imagine if you will, a group of Essential Workers who put aside their concern for themselves and their families, agreeing to toil to produce Corian products within DuPont’s Tonawanda Plant over the past year or so, hailed as Heroes for keeping the supply chain going during hard economic times brought about by the Coronavirus Pandemic.

And imagine if you will, these Workers agreeing to a contract extension to continue working and filling orders while their United Steelworkers (USW) Representatives sat at a bargaining table with management in an effort to negotiate a new and fair contract that would reward these Essential Workers for the great work they were doing during trying times.

But now, as Christmas approaches, it would appear management has gone the way of the Grinch - wanting Workers to agree to a contract that - unbelievably, could cut their yearly salaries as much as $15,000.

In fact, no one would be excused it they wondered to themselves if the skin of DuPont management has actually turned a shade of green as they contemplate making the Holiday Season one of the worst ever for their loyal local workforce.

“It ‘makes me sick to my stomach,’” Werner, who’s married and has a nine-year-old child, said.  “I feel (DuPont) ‘just doesn’t value’ (its Employees).  When I got hired ‘I thought this was where I was going to retire from.’  ‘I don’t really feel like that anymore and I really don’t want to go back there.’” 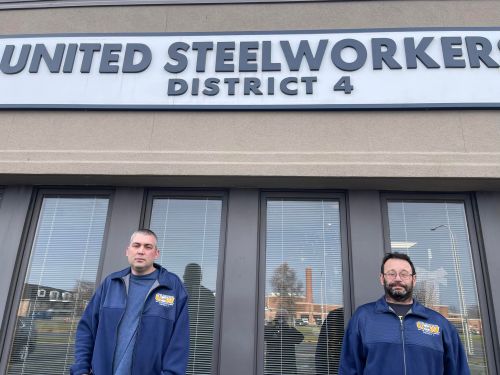 “For me, ‘more like’ ($15,000),” added Leo Sperduti, a Maintenance Mechanic at the DuPont Plant, who also serves as Financial Secretary for USW Local 6992.

Sperduti, who’s married with two adult children and has worked at the Tonawanda Plant for the past 15 years, says he’s - in a word, “pissed.”

Joined by USW District Sub-Director Jim Briggs and USW District 4 Staff Representative Brigitte Womer, the two USW Union Officials/DuPont Tonawanda Employees sat down with WNYLaborToday.com to talk about the present situation at the company and to make the general public and the Western New York Labor Movement alike acutely aware of what the company is offering its local workforce.

Local 6992 currently represents 308 Workers at the DuPont/Tonawanda Plant who are employed in a number of departments, including clerical, production, maintenance and shipping.

The current four-year contract had been extended on September 23rd and it runs through March 22nd - however, should negotiations come to a standstill, the USW has the option of shortening the extension in February.

To date, USW Representatives say there have been “eleven to twelve full days of negotiations” since the contract expired.

Problems have occurred at the bargaining table over the company’s wishes to negatively deal with call-in pay, forced overtime (when no volunteers step forward to agree to continue working) and shift differentials.

That’s where the Workers say their hourly wage could take as much as a $6 to $7 an hour hit, which amounts to thousands and thousands of dollars lost in annual salary.

In addition, there’s a Two-Tier Pay System in place where the company is looking to “filter” Workers “down” into a lesser pay tier.

“This is a company whose Workers ‘were essential.’  ‘Who worked during’ a pandemic.  ‘Now they want to reduce their paychecks.’  If you ‘transfer to another job (title) within the plant, you could be locked in for as many as two to three years at a lower rate’ (of pay).  ‘This amounts to an attack on the families of the Workers at DuPont,’” Briggs said.

“Based on their proposals, ‘it could be as long at (14) years, (working under a transferred job title),’” Werner added.

And, DuPont, Briggs said, has recently outsourced eight USW-represented jobs in the plant’s Bin Room - which mixes ingredients to turn the Corian product into different colors, to a Non-Union business in the area, which pays their Employees “far less” that what the Bin Room Workers were paid, as well as the health and pension benefits they receive.

“These have been ‘difficult’ bargaining sessions,” Briggs told Your On-Line Labor Newspaper.  “And it ‘intensified’ when (management) ‘put these things on the table.’  ‘It’s had a dramatic (impact) on our Members and will for the next generation of Workers’ (at the plant).  We have second, third and fourth generations working at DuPont, ‘but how are you going to attract young people’ (to these jobs)?    The company’s ‘outsourced’ the Bin Room process to a local company ‘that pays little to no benefits and half our Member’s wages.’  ‘Are you going to pay less (in the future) than what you pay now?’  ‘Our Members are fed up.’”

“But I ‘hope we can reach an agreement that stops the erosion of quality jobs’ at the DuPont/Tonawanda Facility.  (The USW) I’s trying to (negotiate) a package that works for everyone, while the company is working to cut pay,’” Briggs continued.  “If ‘we can’t, (the USW) will be meeting with our Elected Representatives because this company has received low-cost power’ (in the past with the promise of retaining and creating more jobs at the plant).  ‘We’ll need to revisit the tax incentives they’ve received.’”

Sperduti, meanwhile, suggested DuPont review the $2 million a month that he says the company scraps in Corian as a means of bridging the gap to a new and fair contract for the Workers who’d agreed to work throughout the COVID-19 Pandemic.

Regardless of what the Workers face at the bargaining table, it is not stopping them from moving forward on USW Local 6992’s annual Toy Drive and Adopt-A-Family effort to help the less fortunate this Holiday Season.

Today (Monday, December 13th), the Local set up a collection center outside the DuPont Plant, with the hope the donations will be even greater this year as it has put out the word to its Brothers and Sisters across the Western New York Labor Movement. 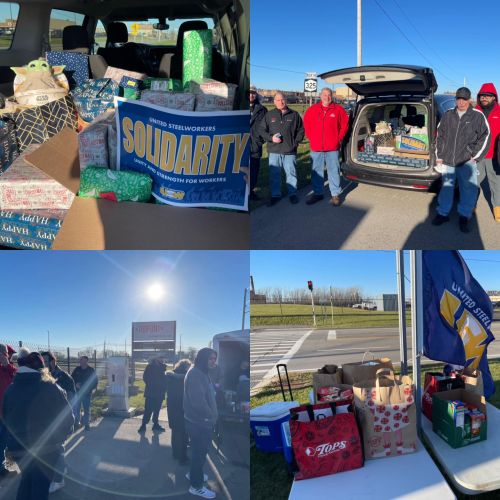 While they also hope to be speaking to local media, which has been invited to the event in order to help spread the message on what DuPont’s doing at the bargaining table, the Workers will be reaching into their own pockets to make donations for families who need help putting food on the table and toys under the Christmas tree for their children. 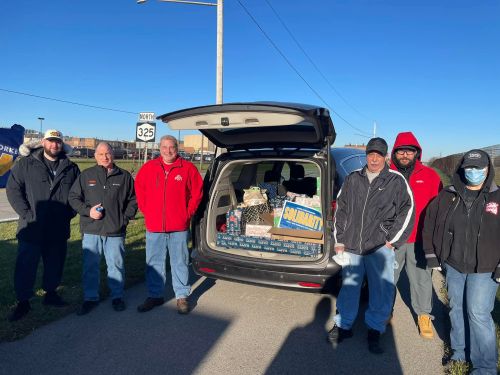 “(DuPont) ‘is looking to take away the fantastic living they make, but here they are - out there trying to help their community,’” Womer said.  “And this is ‘just one example’ (of USW Local 6992’s Members’ generosity).  ‘They donate throughout the year, to Little League Baseball, to those who suffer from domestic violence and to Fire Departments.’” 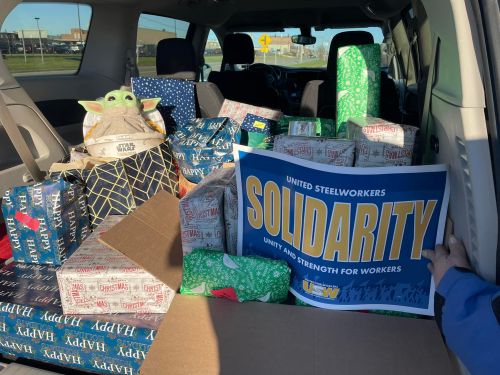 Added Briggs: “Their Adopt-A-Family drive’ gives a Christmas to those who wouldn’t have one otherwise.’  ‘If the company continues to erode their paychecks (and stops them from being involved in such community efforts), our community will suffer.’” 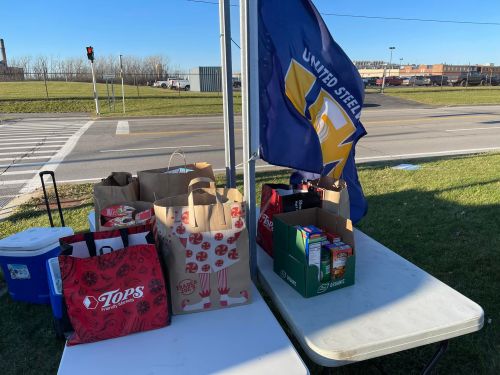 Said Werner and Sperduti: “We ‘give back while DuPont takes it away.’” 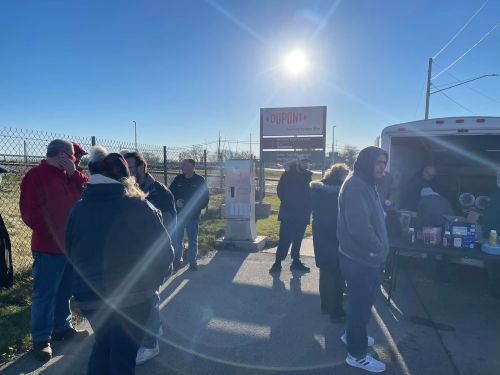