Is Your AT&T Store âNaughty Or Nice? - âNot All Stores Are Alike,â Say CWA Reps, Who Hold Weekend Protest Outside AT&T Retail Stores âThat Were Once Union-Represented, But Are Now Operated By Large, Third Party Dealersâ 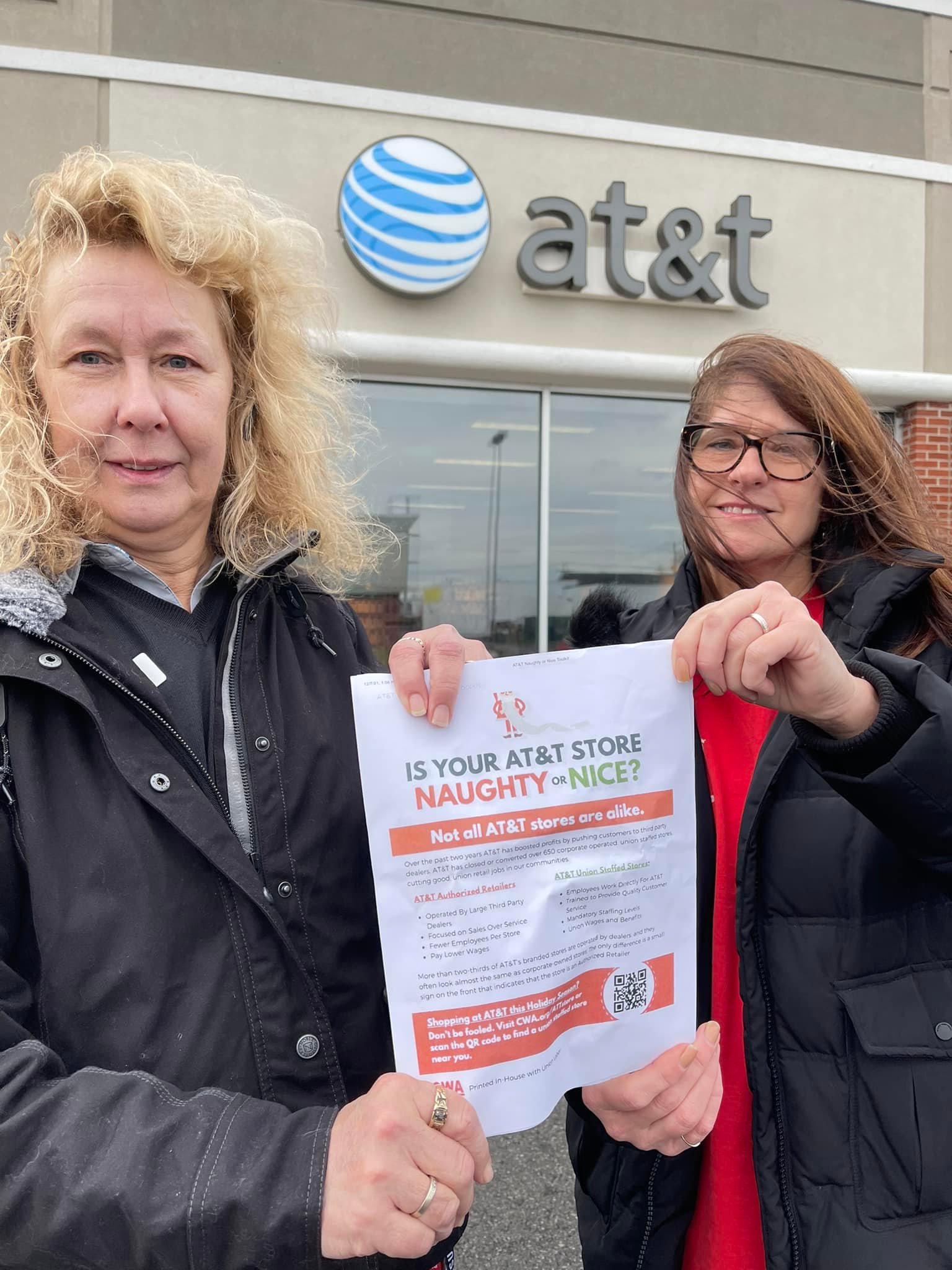 WNYLaborToday.com Editor’s Note: Pictured above, CWA Representatives Colleen Brennan (on the left) and Pat Carcaci hold up one of the CWA’s Is Your AT&T Store Naughty Or Nice? filers outside a company retail store in the Niagara County City of Lockport on Saturday (December 11th).  The Union held actions across CWA District One over the weekend to call public attention to AT&T’s outsourcing, job cuts and Union Busting.  (WNYLaborToday.com Photos)

(LOCKPORT, NEW YORK) – Several Members of Communications Workers of America (CWA) Locals 1115 and 1122 leafleted an AT&T Retail Store in the Niagara County City of Lockport on Saturday (December 11th), which was part of a CWA National Day of Action against AT&T’s outsourcing, job cuts and Union Busting.

Under the banner that asked the question: Is Your AT&T Store Naughty or Nice, several CWAers handed out fliers (pictured below) and took the time to inform incoming customers that this particular AT&T Store on Transit Road was one of the offenders.

“They’re ‘getting rid’ (of their CWA-represented Employees),” Pat Carcaci, a CWA-represented AT&T Retail Employee who’d worked for the company for just under 28 years, told WNYLaborToday.com during an interview outside the store.

“It’s ‘all about the money,’” added Carcaci, who has since retired.

To underscore their point, the Union Representatives pointed to a small company flier that hung in one of the store’s windows (pictured below) that advertised job opportunities at PRIME/AT&T. 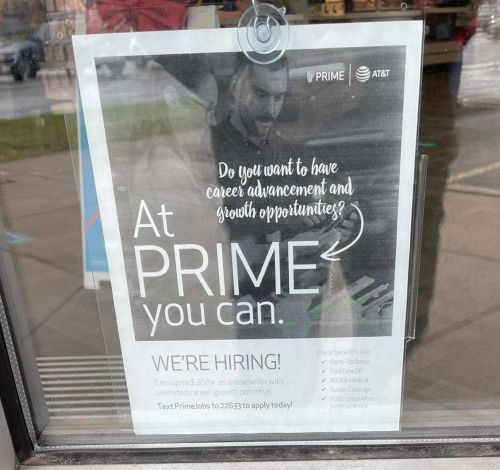 Those CWAers who stood outside handing out fliers and talking to customers also told WNYLaborToday.com the Workers these so-called AT&T agent stores are being paid less than what their former Union-represented counterparts were paid.

In October, Delegates to the annual CWA Convention approved a resolution that called for the Day of Action, citing AT&T’s closing of hundreds of Union-Staffed retail stores, which Union  Officials say have often been replaced by Non-Union authorized retailers.

On Saturday, CWA Members, Retirees and community allies across District One distributed fliers at Non-Union AT&T stores to raise awareness of the impact of AT&T's shift to those Non-Union retailers, as well as the loss of good jobs in their communities. 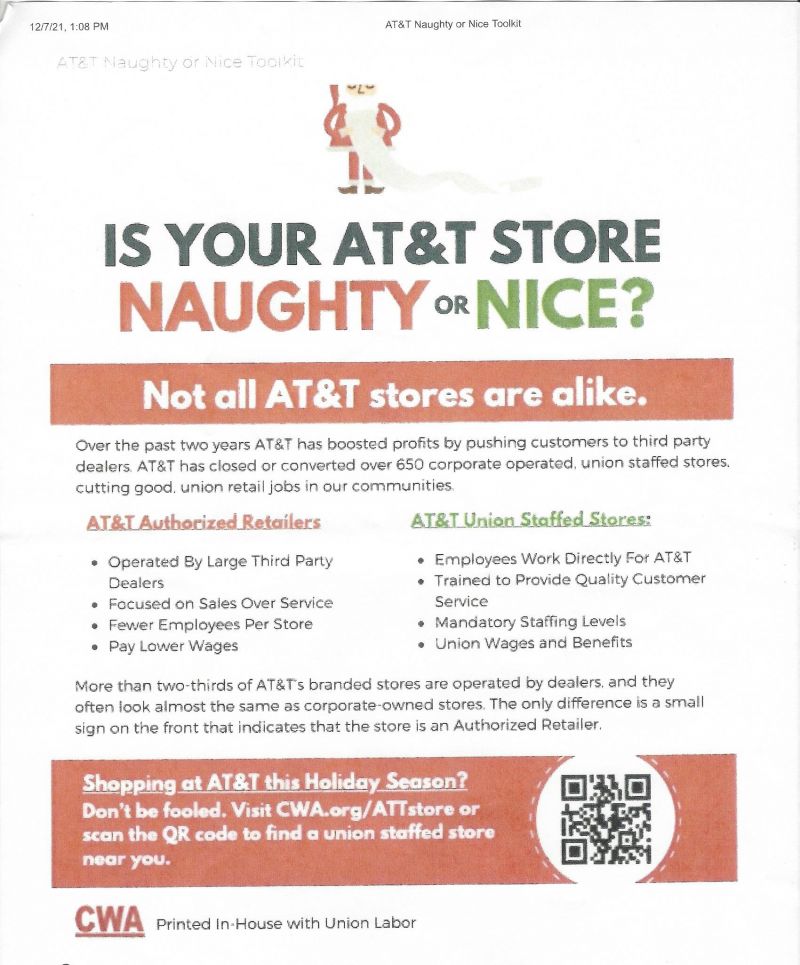 The fliers also directed AT&T Customers to cwa.org/attstore where they can locate Union-Staffed stores.

On October 2nd, AT&T closed the store she worked in and then began operating it instead as an “agent” store - similar to what AT&T allows Walmart and Best Buy to do, she told WNYLaborToday.com.

She and several other CWAers who took part in Saturday morning’s Day of Action were making it a point to educate not only consumers who patronize the store to the fact of what they are missing, but send the message to Western New York Union Members - who’ve been urged to shop at CWA-represented AT&T Retail Stores all these years.

“This ‘isn’t’ a (CWA) AT&T store.  They ‘don’t want any more Union(-represented) Employees.’  Many (in the Western New York and Labor) community ‘don’t realize it,’” Carcaci said. 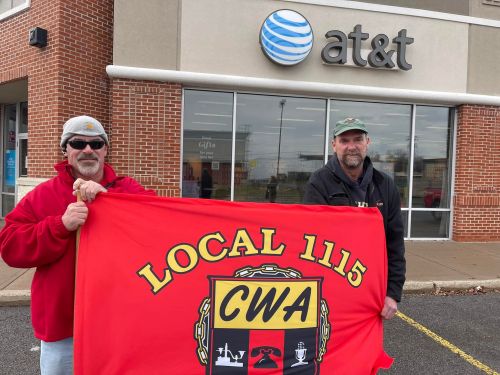 According to the CWA Local 1115 and 1122 Members Your On-Line Labor Newspaper interviewed Saturday, several CWA-represented AT&T Stores in the Southern Tier – including Jamestown and Olean, as well as in Warren, Pennsylvania and in Niagara Falls, have either been closed or have been switched to agent stores. 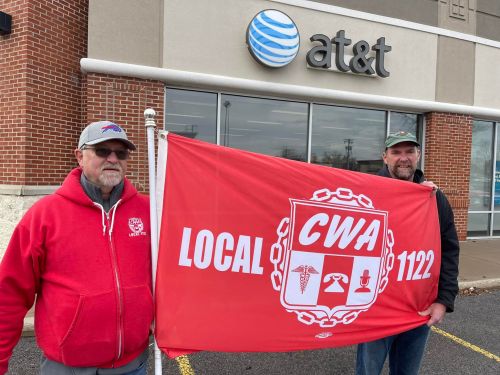 At one point an AT&T Manager came out of the store to ask what the CWA Representatives – which included CWA Local 1122 Area Vice Presidents Ray Klimtzak and William Enright, were protesting.  When informed, he asked they stay on the sidewalk, then turned and walked back into the store without any further comment (below photo). 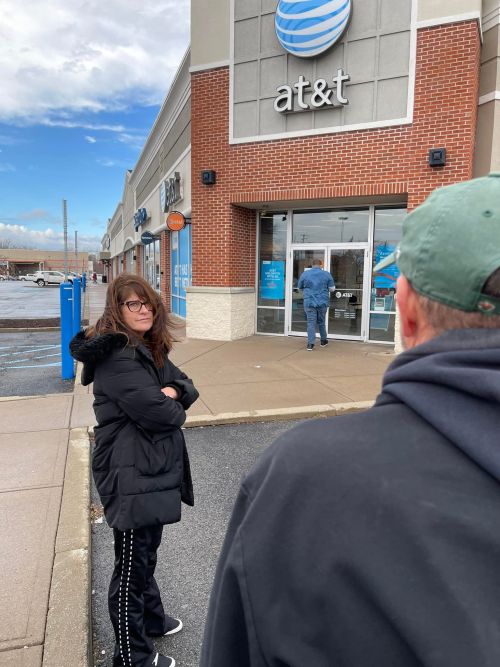 Five or six CWA-represented Workers have lost their jobs in Lockport because of the agent switch and at least a couple of dozen throughout the region have been negatively impacted by the company’s decision, they said.

But there are still as many as 70 CWA-represented AT&T Retail Store Employees “on the job” throughout Western New York, Union Officials said.

Great report WNYLaborToday.com! Thank You! Posted by William Enright on December 13, 2021 at 9:48 am