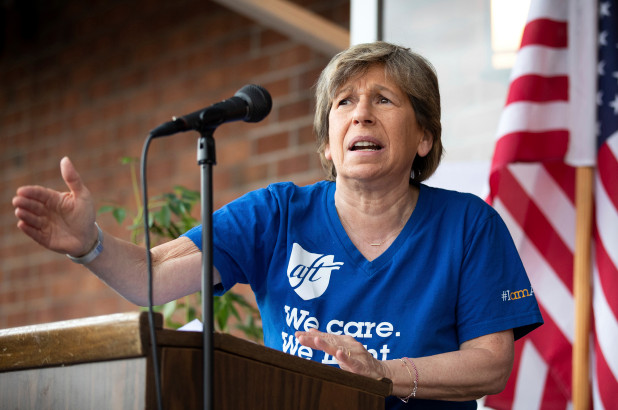 “We’re fighting for it,” AFT President Randi Weingarten told an outdoor press conference held earlier this week in Washington, “because Working Families need it.  The first tax code in the U.S.A. had state and local tax deductions in 1913.  Why?  Because they knew then what we should know now: We have a Federal system, but services are developed by the states.”

Those services include public schools, whose funding takes a big share of state and local spending.

And that money, in turn, comes from individual taxpayers.

But those taxpayers got slammed in the 2017 Trump-GOP tax cut for corporations and the 1%.

Another deletion: The deduction for Union Dues.

Weingarten has another take and so do other Unions.

So do Congressional Democrats, in the Build Back Better Bill.

Democrats propose increasing the itemized deduction, up to a specific figure, either $72,000 or $80,000, depending on who’s talking.

“Great schools are paid for by state (taxes and local) property taxes.  The (tax) code used to incentivize states and localities to invest in themselves, making sure the Middle Class wasn’t double taxed.  That’s why you had the SALT deduction back to 1913,” Weingarten said. “This went unchanged until Donald Trump decided to give that money to the rich.  So who suffered?  Kids.  Commuters.  Public services.  Who pays the price?  (The) Middle Class.  Teachers. Firefighters.  All because Donald Trump wanted to give the rich a tax cut.”

But so did Congressional Republicans, most of them from rural areas, the South, the Great Plains, the Mountain States, and the “border” states between North and South.

Trump played on those states’ taxpayers’ and lawmakers’ resentment of large, urbanized states.

Weingarten said restoring the deduction would aid Workers: “Let’s deliver for the Middle Class. This is a way of putting the incentive system back in place to invest in localities, in sewer systems, in fire systems, in schools.  That’s why we want what the House did in the Senate Bill in #BuildBackBetter.”

To Continue Reading This Labor News Story, Go To: https://peoplesworld.org/article/aft-takes-lead-on-push-to-increase-state-and-local-tax-deduction/