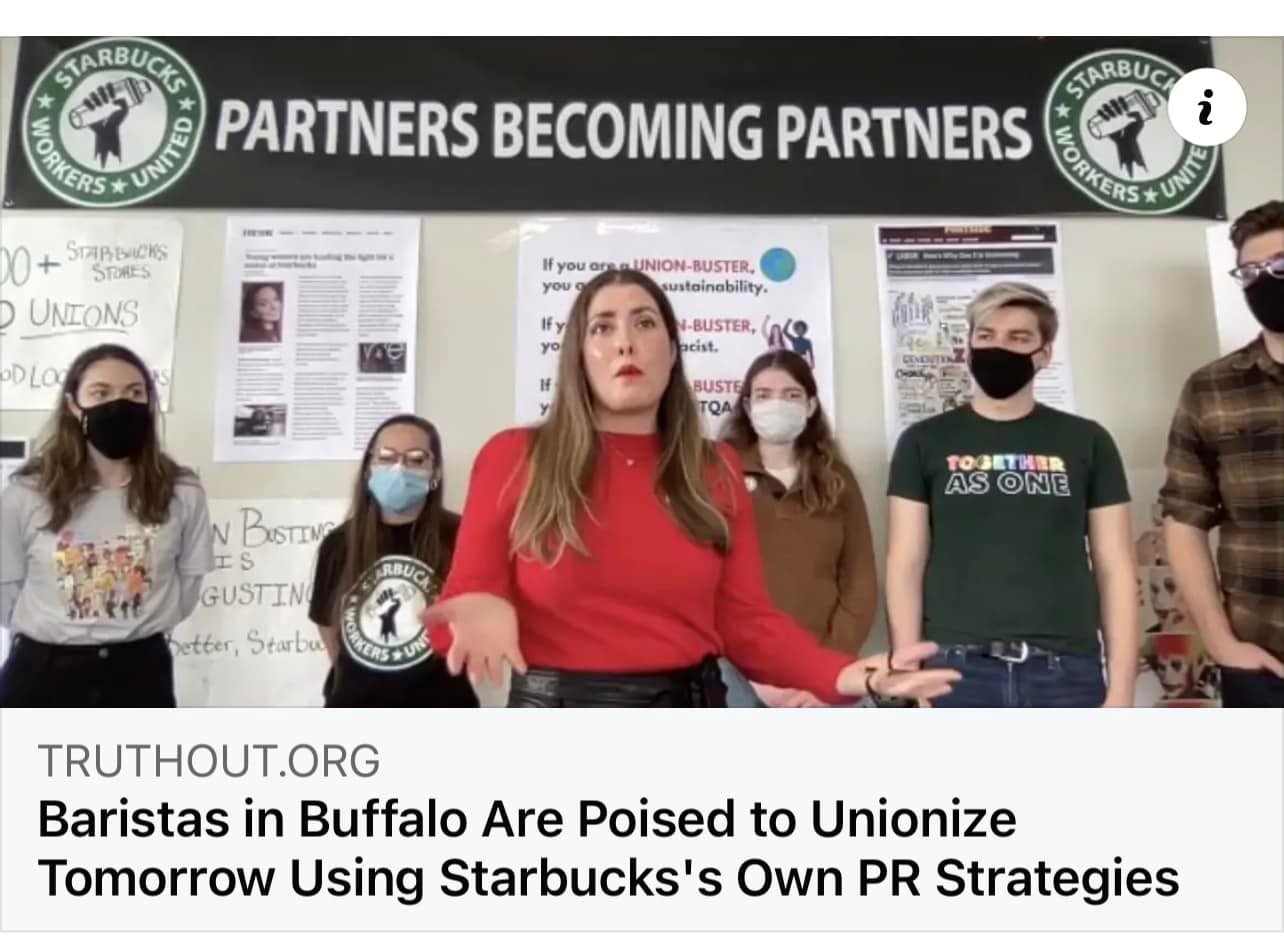 (BUFFALO, NEW YORK) - Baristas with Starbucks Workers United’s Organizing Committee are cautiously optimistic one or more stores will soon become the first of the corporation’s locations to Unionize in the United States.

Results are expected today (Thursday, December 9th) for three of six Starbucks stores in the Buffalo area that had filed for Union Elections with the National Labor Relations Board (NLRB).

Earlier this week, the NLRB dismissed Starbucks’s request to impound ballots already cast in the Union Election and stop the pending vote entirely.

In a victory for Workers United, the Board instead approved the counting of the ballots.

If one or more Buffalo area stores Unionize, they could prove the first dominoes in a broader Starbucks and Cafe Unionization wave that has already spread elsewhere in the country, including Arizona, where a store in Mesa filed for Union Election late last month.

The victory is likely to reverberate across the Coffee Giant’s nearly 9,000 U.S. corporate-owned stores.

The potential victory on the part of the Service Employees International Union (SEIU)-affiliate Workers United would also come in spite of one of the most aggressive Union-Busting Campaigns waged by a large, Fortune 500 multi-national in the U.S.

The company has done nearly everything in its power to crush the Union Drive, including delaying the Union vote and holding captive-audience meetings - ironically dubbed “listening sessions,” in which management has forced Employees to listen to Anti-Union propaganda.

Not only that, but senior managers and corporate executives, including Starbucks North America President Rossann Williams and Chief Operating Officer John Culver, have descended on the Buffalo-area stores throughout the past two months.

They’ve claimed their presence is necessary for an array of reasons, from fixing some of the years-long problems that initially prompted the Unionization campaign, including staffing, sanitation, pest and storage issues at several area stores, to sweeping floors and taking out the trash.

Starbucks Workers United Organizing Committee Members, however, say the managers’ and executives’ obvious intention is to surveil employees and stop Union talk in its tracks.

Colin Cochran, a Barista at Buffalo’s Walden Avenue and Anderson Road store location, which has filed for Union Election - but is not among the three stores whose ballots are being counted today, told Truthout that Starbucks executives temporarily shut down his store location and turned it into a training center just before the store’s initial filing with the NLRB.

He says the move was in part designed to divide and disrupt the store’s majority Pro-Union voting Unit by transferring them to disparate locations.

“Instead of seeing all of my Co-Workers every week, I was seeing maybe a third of my store on a regularly basis,” Cochran tells Truthout. “There are still people I haven’t seen at all in the last two months, and that makes it difficult to organize.”

To Continue Reading This Labor News Story, Go To: https://truthout.org/articles/baristas-in-buffalo-are-poised-to-unionize-using-starbuckss-own-pr-against-it/