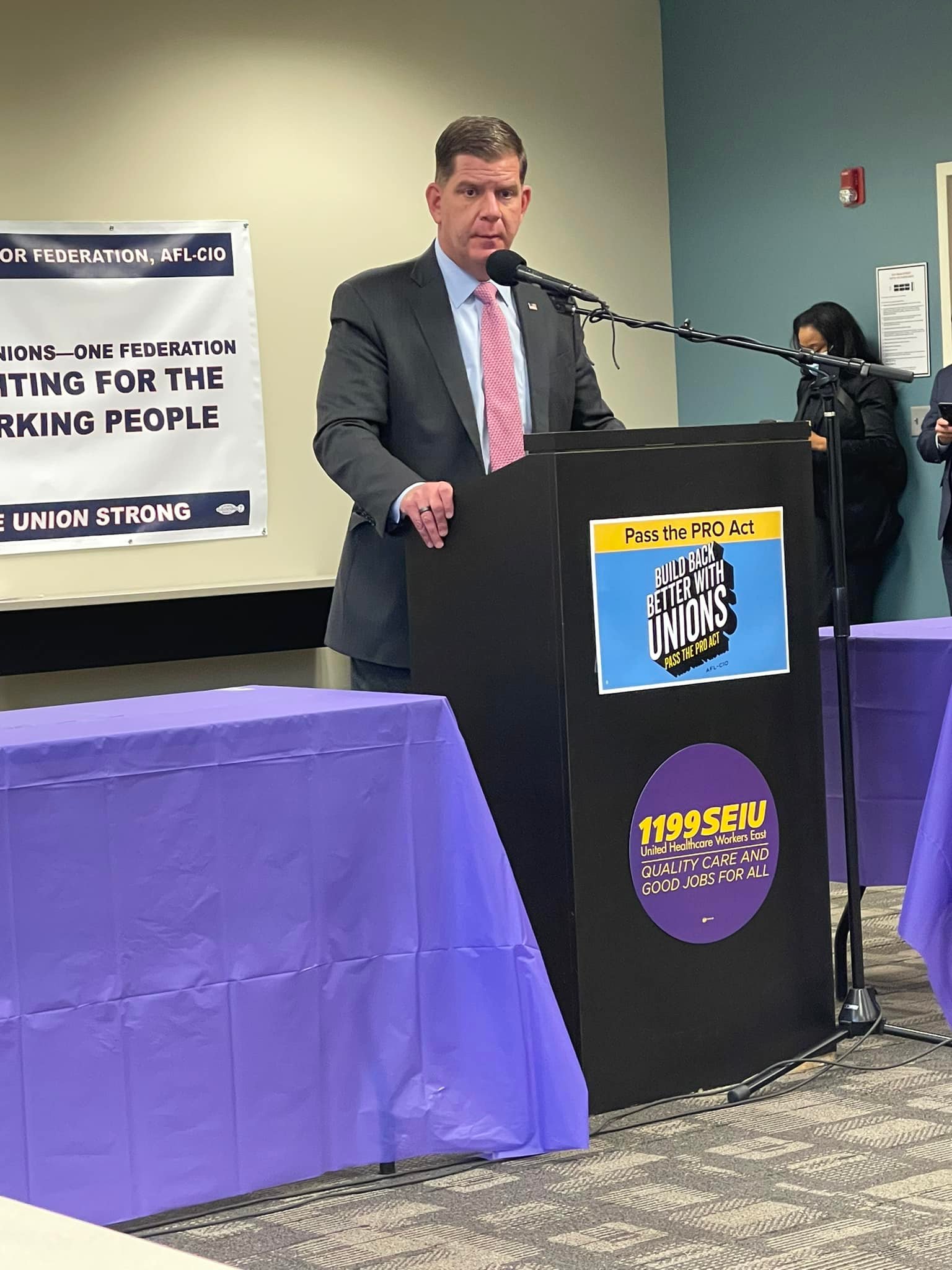 (BUFFALO, NEW YORK) – New England Patriots fan and U.S. Labor Secretary Marty Walsh headed into enemy territory on Monday (December 6th) just hours before his beloved Pats took on the Buffalo Bills in a much-hyped AFC East battle, skirting questions about his football loyalty when pressed about what he thought would be the final outcome on the gridiron.

But make no mistake about it, the former Union Laborer, Building Trades President and Mayor of Boston was warmly welcomed by Western New York Labor, which grinned from ear to ear that for once - Unions now have one of their own heading the U.S. Department of Labor.

Walsh’s spent his day touring a local advanced manufacturing training center in the morning, meeting with Union Leaders and Representatives and answering their questions during a mid-day lunch and joining with a bevy of Labor and Elected Officials who helped the Niagara Frontier Transportation Authority (NFTA) break ground on a new $8 million project to change over to state-of-the-art battery electric buses in order to take advantage of what is being offered by President Joe Biden’s recently-signed $1.2 trillion Infrastructure Bill and his $1.8 trillion Build Back Better Plan, which - hopefully, will become reality in the not too distant future.

Walsh’s visit - which was brought about by the efforts of Western New York Congressman Brian Higgins, is part of the Biden Administration’s national tour (55 cities now in 27 states) to highlight how the bipartisan Infrastructure Law, which was signed into law in November, and the Build Back Better Act, which passed the House last month and would ultimately expand this country’s Social Safety Net, will improve communities through investments in workforce development and U.S. manufacturing.

“In communities like Buffalo, the Bipartisan Infrastructure Law and the Build Back Better Act provide vital investments for a strong, sustainable economy and a skilled workforce,” Walsh said in a prepared release prior to his visit. “These historic plans will create millions of jobs, strengthen America’s Manufacturing Sector and provide Workers a pathway to the Middle Class.”

Local Labor came out in force at 1199 Service Employees International Union’s (SEIU) Buffalo Headquarters mid-day, where the lunch meeting with Labor Leaders and Representatives was held.

Some of the Unions that were in attendance included the Amalgamated Transit Union, the American Federation of State, County & Municipal Employees, the Brotherhood of Locomotive Engineers and Trainmen, the Buffalo Building & Construction Trades Council, the Communications Workers of America, the Civil Service Employees Association, the Ironworkers, the Laborers, the National Association of Broadcast Employees and Technicians, the New York State United Teachers, the Operating Engineers, the Plasterers, the Public Employees Federation, the United Auto Workers, the United Steelworkers, the Teamsters, and the United University Professions, to name just a few. 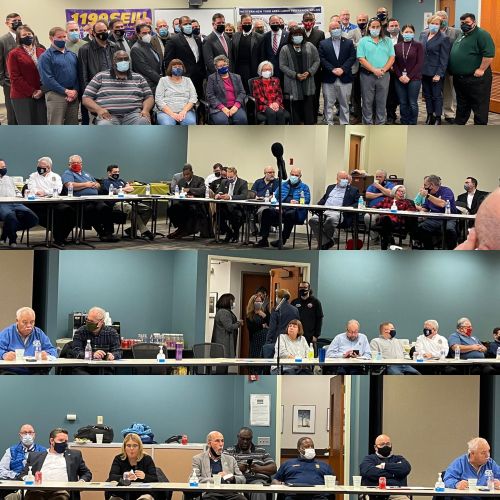 In welcoming Walsh to Buffalo, Western New York AFL-CIO Area Labor Federation (WNYALF) President Peter DeJesus (pictured below) said: “He ‘understands what Labor is and what it needs.’” 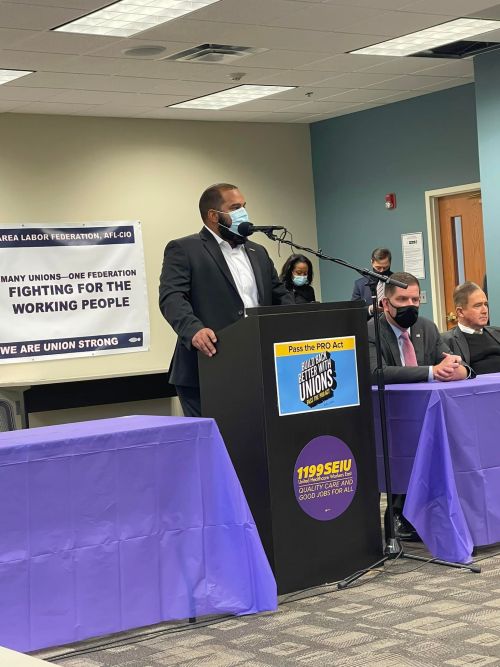 “We’re honored to have him here in Western New York,” DeJesus told WNYLaborToday.com after the luncheon.  “This is the ‘most Pro-Union’ Administration (in Washington, D.C.) - ‘ever.’  He feels for ‘average’ folks.  The Labor Movement ‘will push’ this agenda (preparing and training Workers for good-paying jobs to come).  It’s good to have a ‘voice at the table’ and ‘it was good for him to hear from us and to listen to us, and it’s exciting to hear from him what’s coming.’”

Walsh answered a number of questions from Union Leadership, ranging from the need to ensure steel used for infrastructure projects are made in the U.S. to the maintenance of Labor Rights and adequate staffing in the U.S. Labor Department and making sure that happens to the need for child care and elder care being provided to Working People to Pension Reform to the push to electrify the U.S. Postal System’s fleet of delivery vehicles.

(WNYLaborToday.com was granted permission to attend Walsh’s lunch meeting with local Labor, but only if our On-Line Labor Newspaper agreed not to report on exactly what the Labor Secretary told Labor Leadership.  That’s why this Labor News Report does not contain the answers he provided to the questions he was asked.)

Walsh then traveled down Main Street to the NFTA’s Cold Spring Garage where a bevy of Elected Officials and Labor Leaders joined together to announce a new $8 million upgrade to charge electric buses that will be added to its fleet.

“Three weeks ago, the Infrastructure Bill was signed into law (by President Biden).  It is an ‘exciting’ investment, such as this one here at Cold Spring with electric buses.  ‘This needs just to be a start’ from our Federal Government.  We ‘need’ Apprenticeship Training ‘to meet the demand for jobs.’  For Workers ‘who have been shut out in the past’ - ‘to provide job training for so many.” 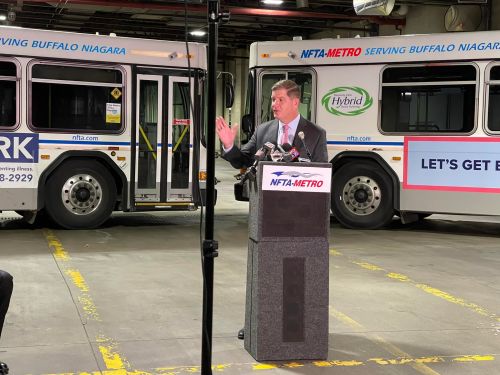 Sam Capitano (pictured below with U.S. Congressman Brian Higgins) - the former Local 210 Business Manager who is now a Special LIUNA (Laborers International Union of North America) International Rep for the Northeast Region, also spoke and put out a public plea for the parents of young people to steer them toward a good-paying career in the Unionized Building Trades: “I’m ‘begging’ parents to (have their children) consider the Building Trades.  Have your kids talk to their (high school) counselors.  They are ‘great’ careers - across the Nation, ‘and we are going to need all the help we can get’ (grooming a new wave young Workers who will fill those jobs).” 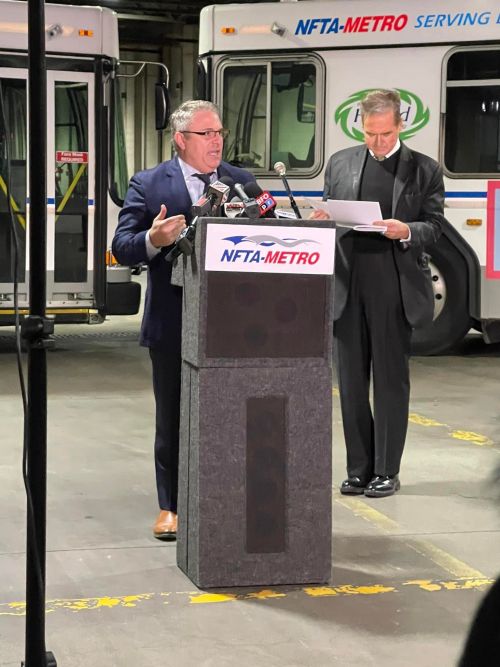 The NFTA operates bus, light rail and airport transportation here in Western New York and employs 1,600 in the Buffalo-Niagara Region.

Much of the NFTA’s Workforce is Unionized, represented by Amalgamated Transit Union (ATU) Local 1342.

The Local’s President, Jeff Richardson - who attended the mid-day lunch with Walsh and was in attendance at the NFTA event, as well as participating in a ceremonial turning of the shovels, told WNYLaborToday.com “this is great.” 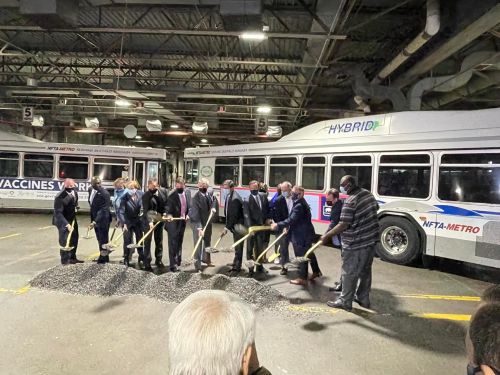 “ATU Local (1342) will ‘hopefully do all work’ (changing over to electric) here in this facilities and ‘hopefully it will lead to the creation of more’ jobs,” he said.

Joined by Congressman Higgins, New York State Department of Labor Commissioner Roberta Reardon, Buffalo Mayor Byron Brown, and State Senator Tim Kennedy - the South Buffalo Democrat who Chairs the influential Senate Transportation Committee, during his morning tour of the Northland Workforce Training Center, Walsh was introduced to a number of young people - men and women of all ethnic backgrounds, who are gaining the knowledge to start careers in high-paying jobs in machining, electrical work and welding.

Walsh encouraged several of the assembled students that he spoke with, urging them not quit what they had embarked upon because of the good things to come: “There’s ‘going to be lots of opportunity for young people, so don’t quit - no matter what you’re dealing with.’  Because if you do, you be asking yourself: ‘Why did I?’  Get ‘as many (qualifications) as you can get’ (to work in a variety of capacities).” 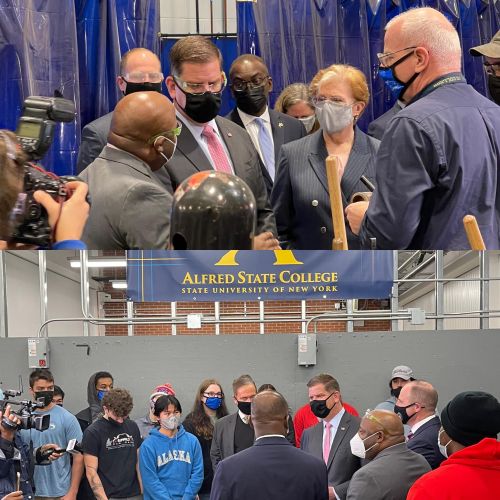 Afterward, Walsh said during a press briefing: “I saw many young people ‘doing some amazing things’ (learning several crafts inside the training center - which receives Federal and New York State funding and provides skilled training for jobs in clean energy and advanced manufacturing).  Young people will be working (on a variety of projects brought about by the Infrastructure Initiative).  I was told there are (120) kids in the electrical field (taking training here) who will go on to ‘good’ careers.  ‘But I think about the diversity, the People of Color and women gaining access to these jobs.’  ‘It’s all about job training - we have to do more of this.’  ‘We have to create more opportunities and pathways to make things better.’”

Throughout the day, Walsh was also asked – several times, about his thoughts on Buffalo Starbucks Partners’ high-profile and closely-watched quest to Unionize at several area stores (the National Labor Relations Board will count votes this Thursday - December 9th) - which would be a major victory for Organized Labor across the U.S. if those Workers would become the first of the companies 8,000 stores to Unionize.

“President Biden ‘has made it clear’ (his stance when it comes to Union organizing).  ‘Everyone has the right to organize, if they choose - unimpeded.’  There’s a ‘resurgence ‘of the Labor Movement in this country - ‘and it is good to see,’” he said.

However, when jokingly pressed about the Bills-Patriots Monday Night Football matchup in Orchard Park, Walsh wished those Labor Leaders who were Bills’ fans “good luck tonight,” but quickly added that his Patriots were “back to being at the top of the AFC East.”

And hours after he left Buffalo, that’s exactly where the Patriots stayed after a 14-10 win over Buffalo.